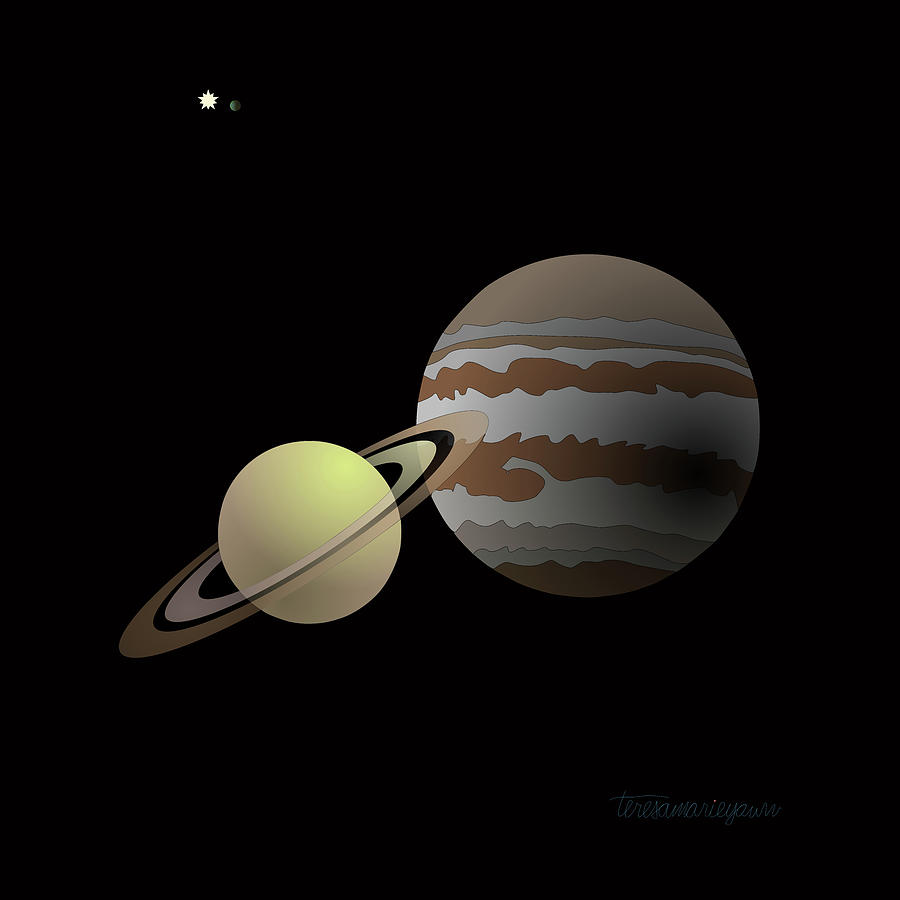 The Great Conjunction of Jupiter and Saturn is a piece of digital artwork by Teresamarie Yawn which was uploaded on December 21st, 2020.

The Great Conjunction of Jupiter and Saturn

This artwork commemorates the Great Conjunction of Jupiter and Saturn, happening now as I write this on 21 December 2020. These two giants of our... more

The Great Conjunction of Jupiter and Saturn

This artwork commemorates the Great Conjunction of Jupiter and Saturn, happening now as I write this on 21 December 2020. These two giants of our solar system align about every 20 years, but this is a “Great Conjunction” because their alignment is so close, they will appear as a double planet. Such conjunctions are very bright and are often referred to as the “Christmas Star” because some believe this is the “star” that led the Wise Men to Jesus on the night Jesus was born. The last time such a close alignment happened, and was visible to Earthlings, was in 1226. As well, this conjunction occurs on the Winter Solstice in the Age of Aquarius; such a combination of staggering celestial events augurs well after a most tumultuous few years on Earth. In the artwork, the view is not seen as if from Earth, but from the back side of Jupiter and Saturn. In the distance, you can see the Sun, small because it is faraway; and next to the Sun, in its close orbit, you can see the Earth (which is scaled larger than it would actually be if you were viewing it from behind Saturn, but I wanted it to be visible). The celestial world is full of wonder and beauty—it is the home where we live and is worth watching. Like Jack Horkheimer used to say, “Keep looking up!” Ever since Jack Horkheimer’s death in 2010, I can’t help but sense that he is now “looking down”, maybe from somewhere behind Saturn.

How majestic is this! Unfortunately we never got to see it, where we live, as there was too much cloud cover.

Wonderful work - I love how the two overlap to symbolize the conjunctoin.

The best art I have seen of this!