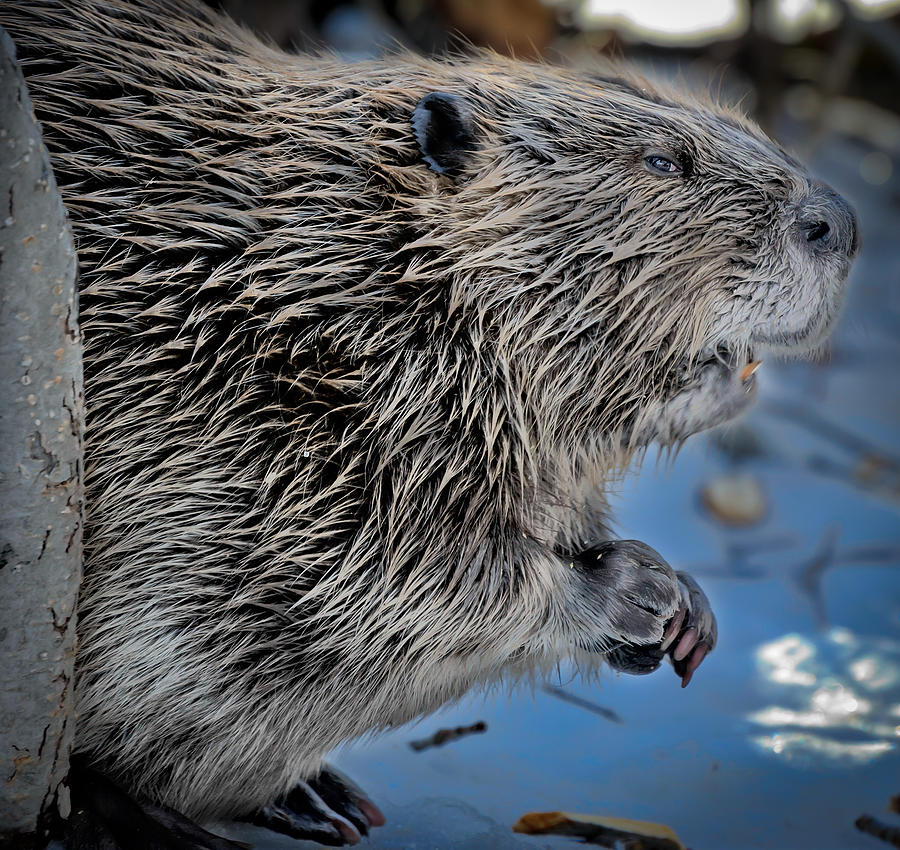 The Guardian is a photograph by Dennis Bolton which was uploaded on February 28th, 2015.

The beaver (genus Castor) is a primarily nocturnal, large, semi-aquatic rodent. Castor includes two extant species, the North American beaver (Castor canadensis) (native to North America) and Eurasian beaver (Castor fiber) (Eurasia). Beavers are known for building dams, canals, and lodges (homes). They are the second-largest rodent in the world (after the capybara). Their colonies create one or more dams to provide still, deep water to protect against predators, and to float food and building material. The North American beaver population was once more than 60 million, but as of 1988 was 6–12 million. This population decline is the result of extensive hunting for fur, for glands used as medicine and perfume, and because the beavers' harvesting of trees and flooding of waterways may interfere with other land uses.

Beavers, along with pocket gophers and kangaroo rats, are castorimorph rodents, a suborder of rodents mostly restricted to North America. Although just two closely related species exist today, beavers have a long fossil history in the Northern Hemisphere beginning in the Eocene, and many species of giant beaver existed until quite recently, such as Trogontherium in Europe, and Castoroides in North America.

Beavers are known for their natural trait of building dams on rivers and streams, and building their homes (known as "lodges") in the resulting pond. Beavers also build canals to float building materials that are difficult to haul over land. They use powerful front teeth to cut trees and other plants that they use both for building and for food. In the absence of existing ponds, beavers must construct dams before building their lodges. First they place vertical poles, then fill between the poles with a crisscross of horizontally placed branches. They fill in the gaps between the branches with a combination of weeds and mud until the dam impounds sufficient water to surround the lodge.

They are known for their alarm signal: when startled or frightened, a swimming beaver will rapidly dive while forcefully slapping the water with its broad tail, audible over great distances above and below water. This serves as a warning to beavers in the area. Once a beaver has sounded the alarm, nearby beavers will dive and may not reemerge for some time. Beavers are slow on land, but are good swimmers, and can stay under water for as long as 15 minutes.

Beavers do not hibernate, but store sticks and logs in a pile in their ponds, eating the underbark. Some of the pile is generally above water and accumulates snow in the winter. This insulation of snow often keeps the water from freezing in and around the food pile, providing a location where beavers can breathe when outside their lodge.

Beavers have webbed hind-feet, and a broad, scaly tail. They have poor eyesight, but keen senses of hearing, smell, and touch. A beaver's teeth grow continuously so that they will not be worn down by chewing on wood. Their four incisors are composed of hard orange enamel on the front and a softer dentin on the back. The chisel-like ends of incisors are maintained by their self-sharpening wear pattern. The enamel in a beaver's incisors contains iron and is more resistant to acid than enamel in the teeth of other mammals.

Beavers continue to grow throughout their lives. Adult specimens weighing over 25 kg (55 lb) are not uncommon. Females are as large as or larger than males of the same age, which is uncommon among mammals. Beavers live up to 24 years of age in the wild.

I appreciate the support, Laurie......thank you!

This is an extraordinary capture Dennis, I ADORE beavers, haven't ever gotten THIS close FV/L

Thank you Heather. This beaver came out every day for about two weeks and didn't seem to mind us.

Thanks a lot Webb.

Thanks Toni. Yes that look could create many subtitles.

Thanks, Christy! Appreciate it!

Excellent portrait. You captured his teeth and fingernails with such clarify. Fv