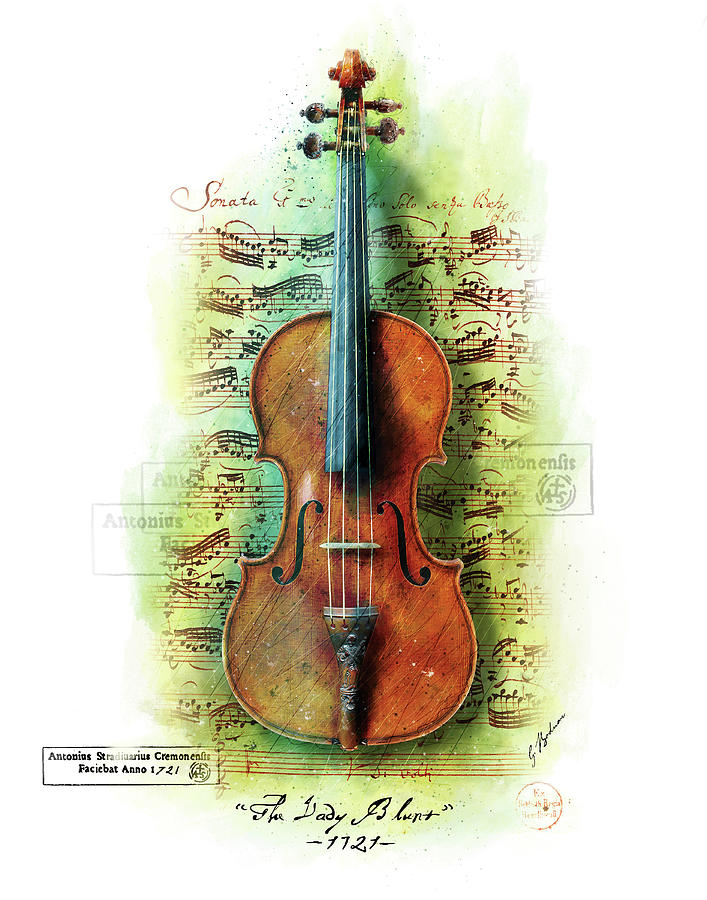 The Lady Blunt Stradivarius V. 2 is a piece of digital artwork by Gary Bodnar which was uploaded on September 22nd, 2018.

“The Lady Blunt”
© 2018 G. Bodnar. All Rights Reserved. May not be used without permission.

Another in a series of illustrations featuring Stradivarius violins. I based this illustration off of Alfred Slocombe’s 1889 chromolithographs of the Tuscan Stradivari. Featured in the background is Bach’s handwritten manuscript of BWV1001, from 17205.

A brief history of the violin…

This world-famous, Masterpiece of a violin, was made in 1721 by the renowned Italian luthier, Antonio Stradivari, and is named after one of its first known owners, Lady Anne Blunt.
The Lady Blunt is one of the two best-preserved Stradivarius violins in existence, and has survived (like the Messiah Stradivarius of 1716), in near-original condition, since it has resided mostly in the hands of collectors and has seen very little use.

The first owner of record was Jean Baptiste Vuillaume, an award-winning luthier, who found the violin in Spain in the 1860s. He eventually sold the instrument to Lady Anne Blunt, the daughter of Ada Lovelace and granddaughter of Lord Byron. In the 1890s, W.E. Hill & Sons bought the violin from her and sold it to an important collector. Years later, it was sold at auction by Sotheby's in 1971, for the then-record amount of $200,000 by Robert Lowe, who had owned the violin for nearly 30 years.

In 2008 it was next sold to the Nippon Music Foundation for over $10 million in a private transaction. Then in the wake of the 2011 Tōhoku earthquake and tsunami, the Lady Blunt was put up for charitable sale, with proceeds going to the Nippon Foundation's relief fund, with the sale of the instrument reaching almost $15.9 million—more than four times the previous auction record for a Stradivarius.

In the world of stringed instruments, The Lady Blunt is certainly one of the great masterpieces—the equivalent of da Vinci’s Mona Lisa, or Michelangelo’s David.