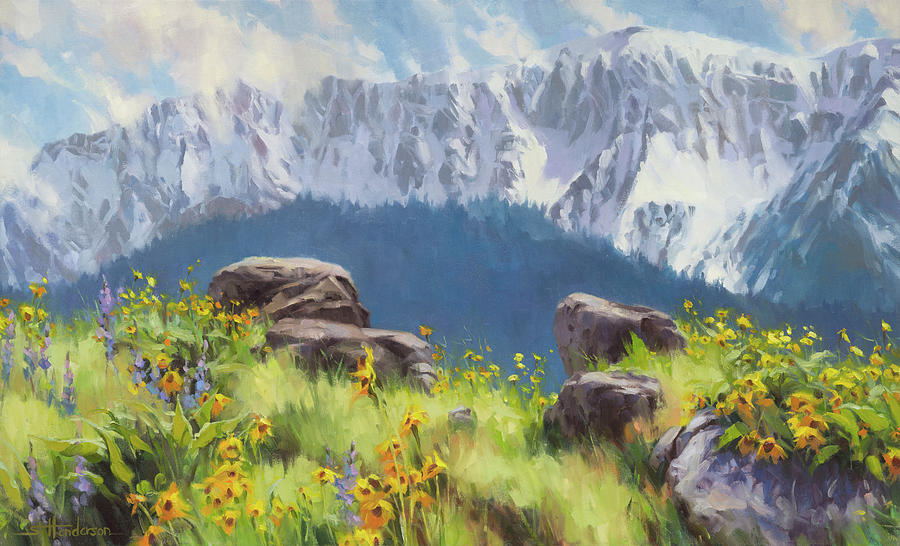 The Land of Chief Joseph is a painting by Steve Henderson which was uploaded on March 30th, 2017.

The Land of Chief Joseph

A burst of yellow wildflowers heralds spring, while snow packed peaks surround the viewer in a mountain wilderness landscape.

This is The Land... more

The Land of Chief Joseph

A burst of yellow wildflowers heralds spring, while snow packed peaks surround the viewer in a mountain wilderness landscape.

This is The Land of Chief Joseph, the mountain in the Wallowa Range of Oregon that overlooks Lake Wallowa and the valley where Young Chief Joseph, and his Nez Perce band, spend the summers and spring hunting, fishing, and gathering berries.

It is not that long ago – the late 19th century – that Chief Joseph and the Nez Perce lived in and loved this area, but the change that has been wrought in that 130 years is massive and, for the Native American tribe that for so long called this area home, calamitous.

There is a small area of the landscape, down between the end of the lake and the road that runs into the town of Joseph, that belongs to the Wallowa band of the Nez Perce, who acquired it back in the late 20th century. Visitors – non-Native American as well as those of the tribe – are welcome to walk the trails that meander through the fields, and feel the embrace of the mountains that surround and embrace.

If you block your peripheral vision and just stare into the mountains and the trees, it’s possible to imagine what it must have been like here back when the land was the home of Chief Joseph and his people.

Beautiful work, Steve!!! Congratulations, your work is Featured in "Your Best Work"! I invite you to place it in the group's "Featured Image Archive" Discussion!!

love the flowered foreground contrast to the snow covered mountains

Congratulations your beautiful work is being featured in 500 Views Share Group & Shared:-)

Such a gorgeous painting Steve, fantastic work as always!

Great view and painting. l/f/vote in Art for Ever with You contest.

revisit... marvelous indeed! thanx for sharing the photo of the painting, as well as writing the description!... ;-} (l+f)