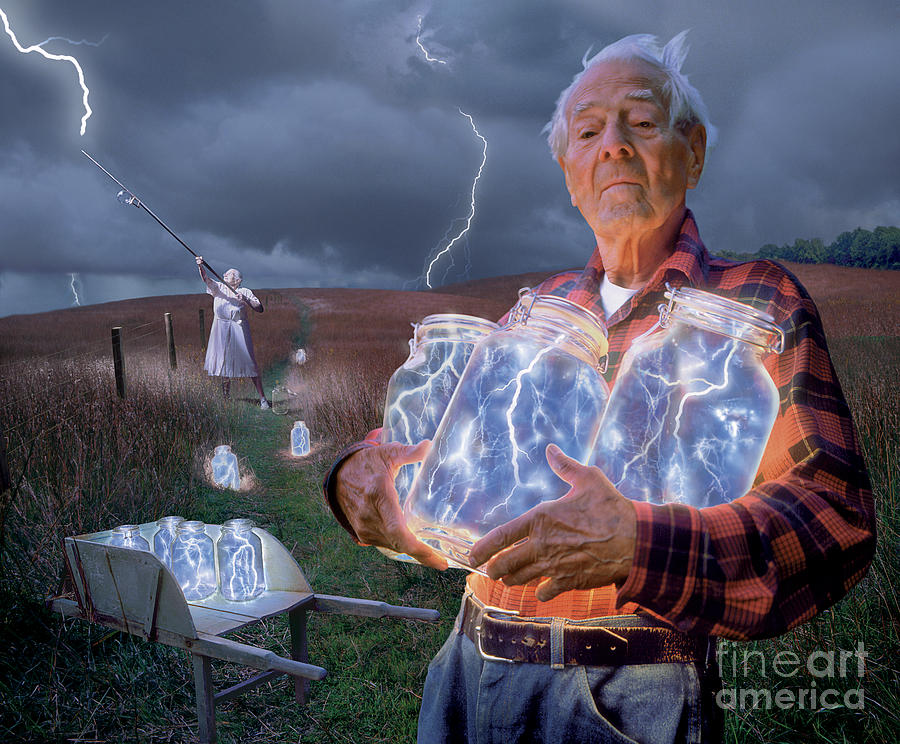 The Lightning Catchers is a photograph by Bryan Allen which was uploaded on March 14th, 2014.

Much of the magic of this image for me is the people in it and my history with them. As a kid growing up on a quiet suburban street in the late 60's,... more

Much of the magic of this image for me is the people in it and my history with them. As a kid growing up on a quiet suburban street in the late 60's, I knew most of the neighbors and the man in the foreground, Mr. Bronson, was a one. My friends and I thought of him as a bit of a wizard. He had all this unusual electrical equipment in his house, had several patents, and talked of strange secret projects he had worked on in the past, some military, some not. He could build a keyboard organ from just boxes of parts with no plans. He had spent time as a photographer back when 8x10 cameras were the norm. He was able to grind his own lenses from blanks of glass and even built 6 leaf irises from thin sheets of metal. Of extra interest to the neighborhood kids was a massive stereo system he built all from parts wired to dozens of large speakers juiced with enough wattage to rattle your teeth out and make your scalp tingle. Ironically, my very first introduction to him was when I threw a snowball at his house and dented the aluminum siding. He was none too pleased. Of course that was before I knew what a treasure he was, long before.

Walt was also instrumental in helping me put lightning in a jar. I came to him when I was struggling with a way to capture electricity on film. I wanted everything in the image to be real, not created by gimmicky Photoshop filters. He lent me this odd-looking tool that looked like an old bakelite flashlight with a big 3 inch metal bee stinger where the lens would have been and wire and plug on the other. He said it was used for testing neon signs for leaks. I was able to contact-expose electricity in the darkroom by pressing wrinkled foil against raw film and zapping the length of the foil with the tool. Anyway, he was a character and was perfect for the role of Lightning Catcher despite being 92 at the time. He was part Iroquois Indian, which gave him something of a regal look.

The gal in the pic is not Walts wife. She was the local historian in the town library of Boonton, NJ, above which I once had my photo studio. I did not know her as well as Walt but she was a wonderful person and very enthusiastic about being in the image. Both of them have since passed away and each had the print displayed at their service.

Again, please excuse the watermark. It won't appear on your poster. Stealing this picture had become sport for many. Illegal copies have appeared on no less than a bootleg Pink Floyd CD and even an FBI web page. Go figure. Does one sue the FBI or just smile and move on?

Congratulations on your recent sale, Bryan!

Congratulations on your super successful sale!

Congratulations for the sale! Amazing work

Thank you Lucia, much appreciated!

Hi Alex. Thanks for the kind words!

Thanks Dawn, the idea took a while to percolate but seems to have worked out.

Thank you Ramon, much appreciated!

This is super cool. Love it.

Thanks so much Starr!

One of a kind Congrats Bryan.

Thank you Gary, much appreciated!