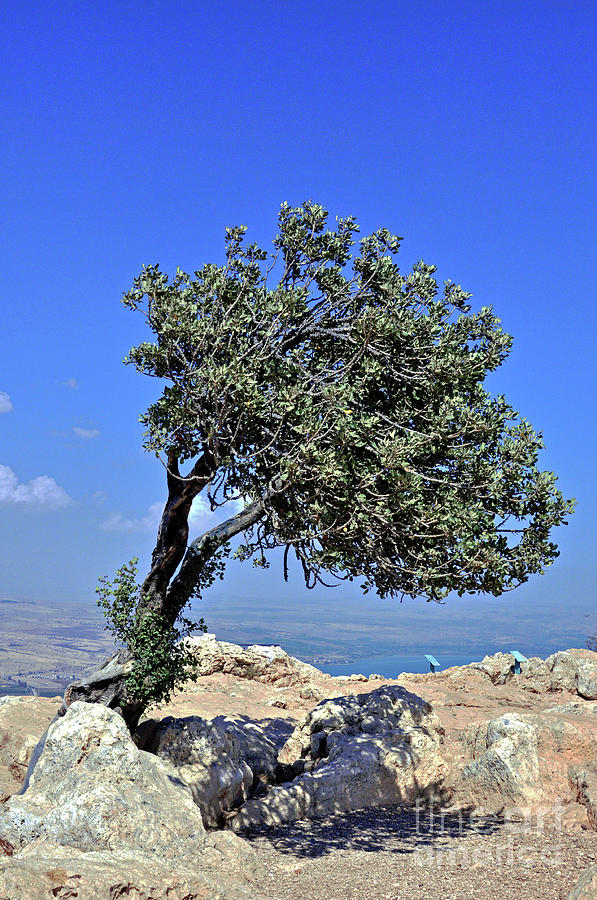 The Lone Carob Tree is a photograph by Lydia Holly which was uploaded on January 19th, 2019.

This photograph depicts a lone carob tree which grows atop Mount Arbel in Israel. You can just see a bit of the Sea of Galilee in the distance. Carob... more

This photograph depicts a lone carob tree which grows atop Mount Arbel in Israel. You can just see a bit of the Sea of Galilee in the distance. Carob trees are evergreens and native to the Eastern Mediterranean area and Carob trees are among Israel's most prominent trees. Carob, (Ceratonia siliqua), also referred to as locust bean or St. John’s bread is a tree of the pea family (Fabaceae), and they are often grown for their edible pods. The ripe dried pods can be ground into a powder that is somewhat similar in flavour to cocoa, and carob powder, chips, and syrups are commonly used as an alternative to chocolate in health-food products. The names locust bean and St. John’s bread come from the belief that the “locusts” on which John the Baptist fed were actually carob pods, and not locusts, the insects. While The Galilee is not desert land where John The Baptist had his ministry it is obvious that they can find their way into rocky terrain. It is also believed that the husks that were eaten by the Prodigal Son in Jesus' parable (found in Luke chapter 15) may have been discarded carob pods. Even today carob continues to be an important feed for livestock. An interesting thing I discovered when doing a little research on this tree: "The word carat, which is still used today to measure gold and diamonds, comes from the Arabic name for the carob seeds because of their uniformity in weight." http://www.public.asu.edu/~camartin/plants/Plant%20html%20files/ceratoniasiliqua.html

Lydia, this is stunning. f/l

Thank you so much my friend from Weaverville, NC for your purchase! I pray this image will bring many times of enjoyment to you and your family!

Thanks so much Nieves for your encouraging comment and for reading the description!