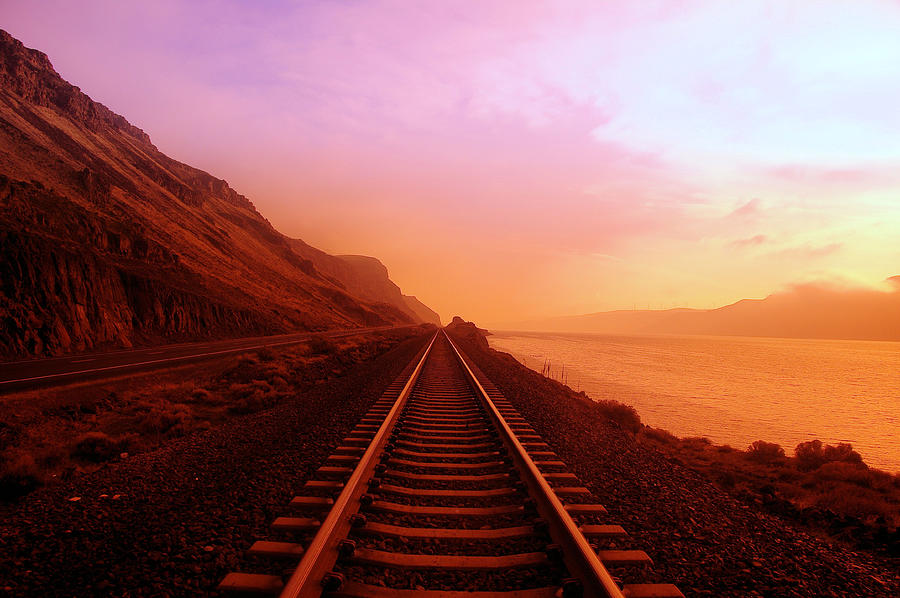 The Long Walk To No Where is a photograph by Jeff Swan which was uploaded on March 10th, 2011.

The Long Walk To No Where

The Columbia River is the largest river in the Pacific Northwest region of North America.[9] The river rises in the Rocky Mountains of British... more

The Long Walk To No Where

The Columbia River is the largest river in the Pacific Northwest region of North America.[9] The river rises in the Rocky Mountains of British Columbia, Canada. It flows northwest and then south into the US state of Washington, then turns west to form most of the border between Washington and the state of Oregon before emptying into the Pacific Ocean. The river is 1,243 miles (2,000 km) long, and its largest tributary is the Snake River. Its drainage basin is roughly the size of France and extends into seven U.S. states and a Canadian province.

By volume, the Columbia is the fourth-largest river in the United States; it has the greatest flow of any North American river draining into the Pacific. The river's heavy flow and its relatively steep gradient gives it tremendous potential for the generation of electricity. The 14 hydroelectric dams on the Columbia's main stem and many more on its tributaries produce more hydroelectric power than those of any other North American river.

The Columbia and its tributaries have been central to the region's culture and economy for thousands of years. They have been used for transportation since ancient times, linking the many cultural groups of the region. The river system hosts many species of anadromous fish, which migrate between freshwater habitats and the saline Pacific Ocean. These fish�especially the salmon species�provided the core subsistence for natives; in past centuries, traders from across western North America traveled to the Columbia to trade for fish.

In the late 18th century, a private American ship became the first non-indigenous vessel to enter the river; it was followed by a British explorer, who navigated past the Oregon Coast Range into the Willamette Valley. In the following decades, fur trading companies used the Columbia as a key transportation route. Overland explorers entered the Willamette Valley through the scenic but treacherous Columbia River Gorge, and pioneers began to settle the valley in increasing numbers, following both routes to enter it. Steamships along the river linked communities and facilitated trade; the arrival of railroads in the late 19th century, many running along the river, supplemented these links.

Since the late 19th century, public and private sectors have heavily developed the river. The development, commonly referred to as taming or harnessing of the river, has been massive and multi-faceted. To aid ship and barge navigation, locks have been built along the lower Columbia and its tributaries, and dredging has opened, maintained, and enlarged shipping channels. Since the early 20th century, dams have been built across the river for the purposes of power generation, navigation, irrigation, and flood control. Today, a dam-impounded reservoir lies along nearly every U.S. mile of the once free-flowing river, and much of the Canadian stretch has been impounded as well. Production of nuclear power has taken place at two sites along the river. Plutonium for nuclear weapons was produced for decades at the Hanford Site, which is now the most contaminated nuclear site in the U.S. All these developments have had a tremendous impact on river environments, perhaps most notably through industrial pollution and barriers to fish migration.


Picture taken West or Rosevelt Wa on a afternoon run

Superb shot Jeff. It was nice to hear from you. LF

A wonderful image Jeff and kudos on the book.

Congratulations on your sale, Jeff!

This work reminds me when I was a kid and would take the train with my mother. It was so much fun. Congratulations on your feature in Collector's Gallery. FL

Congratulations on your sale and happy holidays!

I love the colors and composition .

Congratulations on your wonderful sale !

Congratulations on your sale! Fl

Thank u buyer from Chicago

Awesome colors capture and congrats on selling one !

Thank you buyer from Belmont Ca