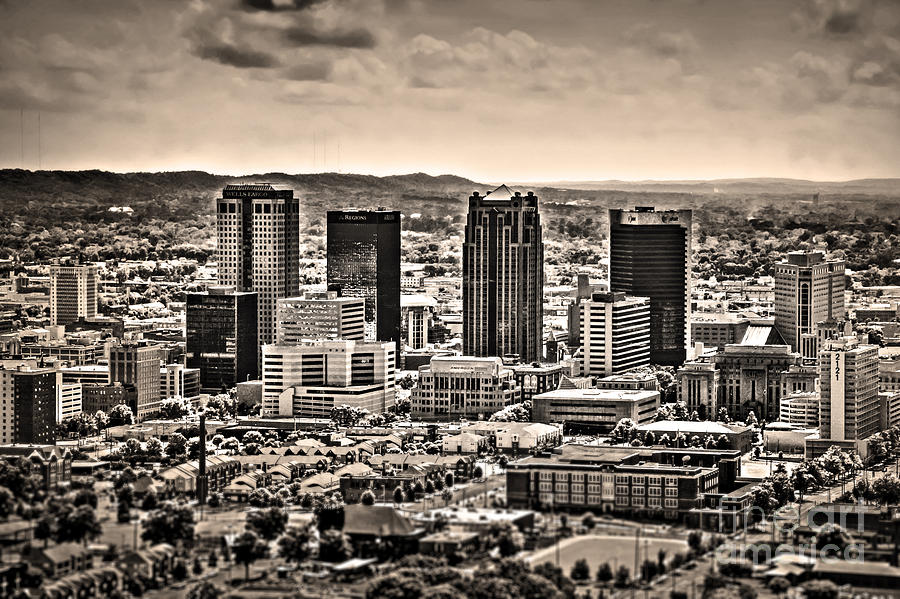 The Magic City Sepia is a photograph by Ken Johnson which was uploaded on September 25th, 2013.

Birmingham (/ˈbɜrmɪŋh�m/ BUR-ming-ham) is the largest city in Alabama. The city is the county seat of Jefferson County. The city's population... more

Birmingham was founded in 1871, during the post-Civil War Reconstruction period, through the merger of three pre-existing farm towns, notably, former Elyton. It grew from there, annexing many more of its smaller neighbors, into an industrial and railroad transportation center with a focus on mining, the iron and steel industry, and railroading. Birmingham was named for Birmingham, United Kingdom, one of the UK's major industrial cities. Many, if not most, of the original settlers who founded Birmingham were of English ancestry.[3] In one writer's view, the city was planned as a place where cheap, non-unionized, and African-American labor from rural Alabama could be employed in the city's steel mills and blast furnaces, giving it a competitive advantage over industrial cities in the Midwest and Northeast.[4]

From its founding through the end of the 1960s, Birmingham was a primary industrial center of the South. The pace of Birmingham's growth during the period from 1881 through 1920 earned its nicknames The Magic City and The Pittsburgh of the South. Much like Pittsburgh, Birmingham's major industries were iron and steel production, plus a major component of the railroading industry, where rails and railroad cars were both manufactured in Birmingham. In the field of railroading, the two primary hubs of railroading in the Deep South were nearby Atlanta and Birmingham, beginning in the 1860s and continuing through to the present day. The economy diversified during the later half of the twentieth century. Though the manufacturing industry maintains a strong presence in Birmingham, other businesses and industries such as banking, telecommunications, transportation, electrical power transmission, medical care, college education, and insurance have risen in stature. Mining in the Birmingham area is no longer a major industry with the exception of coal mining. Birmingham ranks as one of the most important business centers in the Southeastern United States and is also one of the largest banking centers in the United States. In addition, the Birmingham area serves as headquarters to one Fortune 500 company: Regions Financial, along with five other Fortune 1000 companies.

Love it. Is this done with Lens Shifting? I feel like a train should be shooting through here at anytime.... Nice Capture.

Ric, thanks for your comments. No lens shifting.