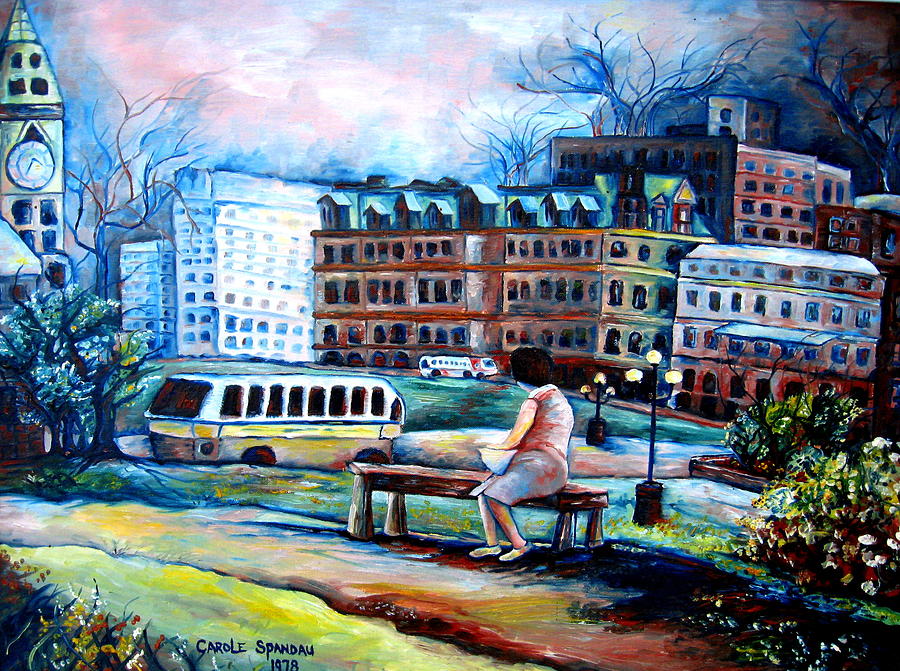 The Peace Tower In Ottawa is a painting by Carole Spandau which was uploaded on September 2nd, 2009.

The Peace Tower In Ottawa

The Peace Tower In Ottawa

The Peace Tower (officially the Tower of Victory and Peace;in French: tour de la Victoire et de la Paix) is a focal bell and clock tower, sitting on the central axis of the Centre Block of the Canadian parliament buildings in Ottawa, Ontario. The present incarnation replaced the 55-metre (180 ft) Victoria Tower after the latter burned down in 1916, along with most of the Centre Block. It today serves as a Canadian icon,and appears on the obverse of both the Canadian fifty-dollar and twenty-dollar bills.Designed by Jean Omer Marchand and John A. Pearson, the tower is a campanile whose height reaches 92.2 m (302 ft 6 in) over which are arranged a multitude of stone carvings, including approximately 370 gargoyles, grotesques, and friezes, keeping with the Victorian High Gothic style of the rest of the parliamentary complex. The walls are of Nepean sandstone, and the roof is of reinforced concrete covered with copper.
At its base is a porte-cochere within four equilateral pointed arches, the north of which frames the main entrance of the Centre Block, and the jambs of the south adorned by the supporters of the Royal Arms of Canada. Near the apex, just below the steeply pitched roof, are the tower's 4.8 m (16 ft) diameter clock faces,[4] one on each of the four facades. The mechanical workings of the timepiece were manufactured by the Verdin Company, and are set by the National Research Council Time Signal. One level below, running around the circumference of the tower's shaft, is an observation deck.[3] This was the highest accessible space in Ottawa until the early 1970s; the Peace Tower dominated the Ottawa skyline, as a strict 45.7 m (150 ft) height limit was placed on other buildings. That limit, however, was later rescinded, leading the Peace Tower to lose its distinction as the city's tallest structure. Cantilevered out at each of the four corners of the tower, at the level of the observation platform, are four 2.5 m (8 ft 4 in) long, 75 cm (2 ft 6 in) high, and 45 cm (1 ft 6 in) thick gargoyles made of Stanstead grey granite from Beebe, Quebec


South clock face and the glass windows of the observation deck belowThe tower's flagpole holds symbolic significance, and acts as the flagpole of the nation. As such, strict protocol surrounds the display of banners atop the Peace Tower, such as half-masting for national mourning, and showing the flag of the sovereign, that of any member of the Royal Family, or the flag of the governor general, when any of those persons are present on Parliament Hill.
The Peace Tower was built not only to stand as an architectural feature and landmark, but also to function as a memorial.[1] It thus houses the Memorial Chamber, a vaulted 7.3 m by 7.3 m (24 ft by 24 ft) room directly above the porte-cochere, with stained glass windows and various other features illustrating Canada's war record, such as the brass plates made from spent shell casings found on battlefields that were inlaid into the floor, and bore the name of each of Canada's major conflicts during the First World War. The stone walls were originally to have been inscribed with the names of all Canada's servicemen and women who had died during the First World War; but, without enough space for all 66,000 names, it was later decided to place Books of Remembrance there instead these books list all Canadian soldiers, airmen, and seamen who died in service of the Crown � whether that of Britain (before 1931) or that of Canada (after 1931) � or allied countries in foreign wars, including the Nile Expedition and Boer War, the First World War, the Second World War, and the Korean War. The displays were later modified to represent a broader overview of Canadian armed conflict, both foreign and domestic, since Confederation in 1867.

I love this painting,Carole.I like the way you positioned the woman on the bench-she is viewing with us.Another charming painting...makes me feel like I am on a vacation when I look at your art. Cheery times to you. Marlene

Beautiful Carole... I love the colors you use.. gives the painting real warmth

Dear Carole, I love to view your site on FAA. You continue to paint detailed & WONDER-FILLED paintings. I admire you. Your fan, Anne