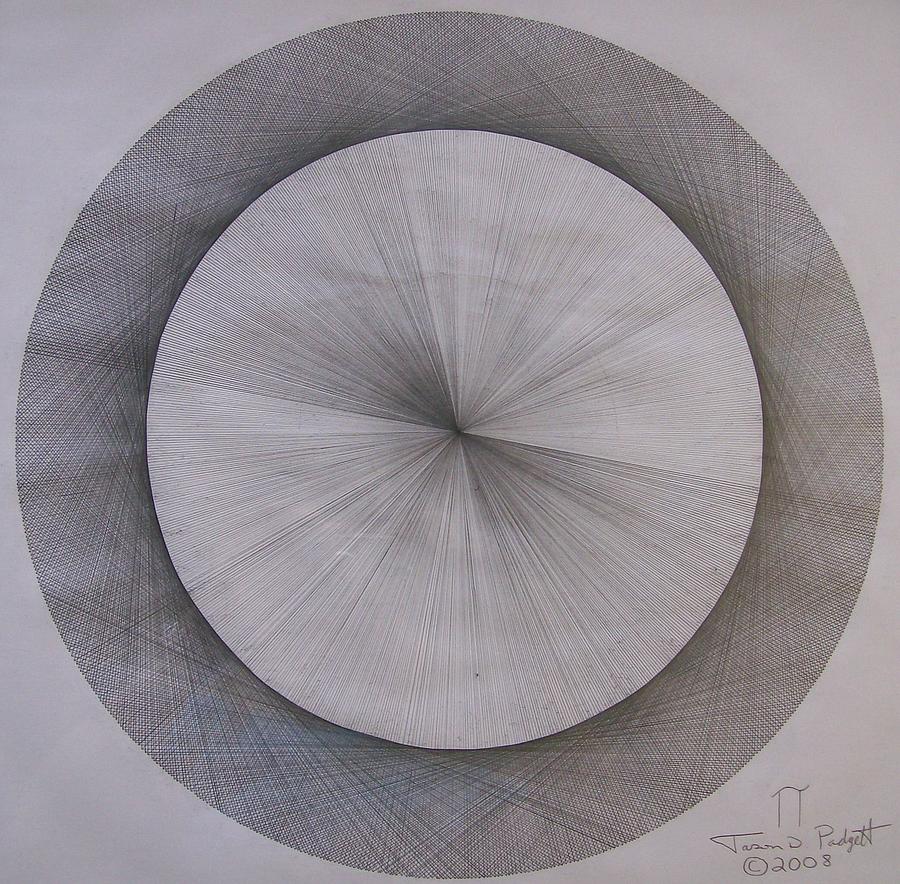 The Shape of Pi is a drawing by Jason Padgett which was uploaded on October 18th, 2008.

The Shape of Pi

In this drawing Jason is showing how perfect circles do not exist...anywhere in the universe. Circles are made from triangles as are all shapes and... more

The Shape of Pi

In this drawing Jason is showing how perfect circles do not exist...anywhere in the universe. Circles are made from triangles as are all shapes and are deeply interconnected with the number Pi. The more trianlges you squeeze within a certain perimeter the closer and closer you approach a circle but you never reach it...you just get closer and closer. This is WHY Pi goes to infininty. Pi is the circumference of a circle (how far around the perimieter) divided by its diameter (the distance from one side of the circle through the center and to the other side). When you add more triangles, the circumference gets slightly larger each time you add more triangles (but by an ever decreasing amount), but the diameter stays the same. A circle with 180 right triangles when you divide it's circumference by it diameter you get 3.141433 (Pi accurate to three decimals). A circle with 360 right triangles, one right triangle every one degree, gives you 3.141552 (Pi accurate to four decimals). This picture is 720 right triangles, which when you divide it's circumference by it's diameter gives you 3.141582 (Pi still accurate to four decimals but almost to five). If we could draw a circle with 25,000 right triangles (and nature does this and far more everday) it would be 3.141592645 (Pi accurate to seven digits). What is so amazing about Pi is that everything in the universe breaks down into it. All shapes (icluding circles, and 'perfect circles' don't actually exist..their made from triangles) break down into straight lines and triangles. Every curve breaks down into microscopic straight lines that change angle by very small amounts (just like this picture looks like a curve but is all perfectly straight lines). In math (trigonemetry) they teach how to convert measurements made in degrees (360 degrees is a circle), into measurements made with Pi (this measurement is called Pi radians). To convert degrees into Pi radians you multiply the degrees by Pi/180 (the fraction of pi over 180). All straight lines are 180 degrees (two right triangles make a straight line 90 + 90 =180) and every ttriangle that exists when you add up all three inner angles always equals 180 degrees (the same as the straight line). Since all shapes that exist break down into straight lines and triangles lets see what happens when we convert the degrees into Pi radians. 180 times Pi/180= 180Pi/180 (in words 180 times pi divided by 180). The 180's cancel out because 180 divided by 180 equals one and one times Pi equals Pi! So every shape in the universe breaks down into pieces of Pi, literally. And some say nature doesn't have a sense of humor! This picture is drawn with straight lines only. It is 720 right triangles rotating 1/2 degree at a time. There is no curve but as you can see the more triangles that are sqeezed into the perimeter the more it APPEARS to be a circle or curve. Just like when you look at a mountain and think, that is not a curve or circle, but if you zoom out into outerspace and look at the earth it LOOKS like a perfect sphere. But when you're on the earth it looks completely different. In other words, what is a circle is relative. The mountain is not a circle when you're looking at it one the earth, but it looks like a circle (or part of one) from outerspace. This is one of the many beautiful illusions of relativity. For those who like the equation aspect, graph f(x)=xsin(Pi/x) and see what happens. As x (the number of sides to a circle) approaches infinity, f(x) will approach Pi. Last but most important is that we have been taught that Pi never ends. That is true when looking at this in pure equation (or mathematical) form...but it is wrong when looking at a 'circle' in reality. This is the really amazing part....Pi ends (physically or more descriptively, in an observational sense). The smallest measurement in the universe is something called a Planck length. The Planck length arises from the limits of observation. In order to observe anything you bounce phtons off of it and they bounce back and you observe the geometry of what you are observing. To observe smaller things, you must hit what you are observing with more photons (or more energy) to get a finer reading (or to be able to observe it). As you observe smaller and smaller things you have to hit them with more and more energy to observe them. You eventually reach a physical "limit" to observation. When you try to observe something smaller than a Planck length you must hit it with so much energy that the point that you are trying to observe collapses into a black hole, absorbs the photons and there is nothing left to observe. So while points smaller than the Planck length exist, they CANNOT be observed by us and are therefore not 'RELATIVE'. It was discovered by Maxwell Planck and he won the nobel prize for it. It's accepted and used worldwide by mathematicians, nuclear physicists etc. What this means is that you cannot physically add an infinite number of triangles in a 'circle'. You can keep adding triangles only until each "side" to the circle (microscopic sides) equals one Planck length and this is where Pi physically (or relativistically) ends without question. The reason mathematicans have missed this (I think) is because of the lack of viewing math from a purely artistic (purely geometric) point of view. When you do equations of circles you never see with your own eyes like you do when you look at this drawing. We are visual creatures and like they say, a picture is worth a thousand words, or in this case, a thousand million equations. One picture shows visually what most would never find in an equation alone.

Hi Jason, According to my darivation from the triangle side length the value of Pi = 180*x/asind(x), where x is the ratio of triangle side length to the diameter of cricle. From this we can say the even if we get limit of side of traingle upto microscopic level like u say plank length, but we can't have limit of macroscopic scale... The variable x defines the infiniteness of universe and we will not have value of Pi upto certain decimal places. It will not not stop until we get physical limits in both directions micro and macro.

Jason Congrats on your sale!! your work gets me ever time, well done.!!v

beautiful work....congrats on your sale

Fascinating! Love this one! Jason, thank you for your comments on my work.

By far the best explanation of Pi that I've ever read! To see it as a shape and use the equation myself nearly brought tears to my eyes. I will use this to teach many students. Keep up the amazing work!

Really interesting, I read the caption too. Thanks for posting this in the group, I am not a mathemetician, but I do understand the concept about the triangles. Mathematical shapes are universally repetative throughout nature and art...this is all very interesting material you are presenting.