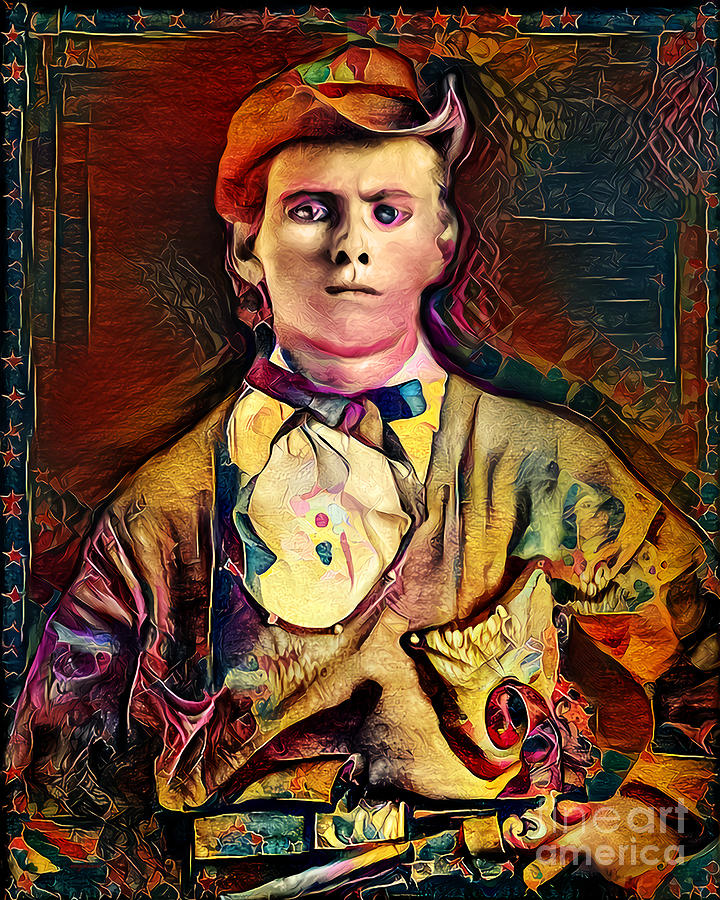 The Wild West Outlaw Jesse James 20210922 is a photograph by Wingsdomain Art and Photography which was uploaded on September 22nd, 2021.

Jesse Woodson James (September 5, 1847 - April 3, 1882) was an American outlaw, gang leader, bank robber, train robber, and murderer from the state of Missouri and the most famous member of the James-Younger Gang. Already a celebrity when he was alive, he became a legendary figure of the Wild West after his death. Some recent scholars place him in the context of regional insurgencies of ex-Confederates following the American Civil War rather than a manifestation of frontier lawlessness or alleged economic justice. -wikipedia

Gunfighter and gunslinger are literary words used historically to refer to men in the American Old West who had gained a reputation of being dangerous with a gun and had participated in gunfights and shootouts. Gunman was a more common term used for these individuals in the 19th century. Today, the term "gunslinger" is now more or less used to denote someone who is quick on the draw with a pistol, but can also refer to riflemen and shotgun messengers. The gunfighter is also one of the most popular characters in the Western genre and has appeared in associated films, video games, and literature. Gunfighters range from different occupations including lawman, outlaw, cowboy and duelist, but are more commonly synonymous to a hired gun who made a living with his weapons in the Old West. A cowboy is an animal herder who tends cattle on ranches in North America, traditionally on horseback, and often performs a multitude of other ranch-related tasks. The historic American cowboy of the late 19th century arose from the vaquero traditions of northern Mexico and became a figure of special significance and legend. A subtype, called a wrangler, specifically tends the horses used to work cattle. In addition to ranch work, some cowboys work for or participate in rodeos. Cowgirls, first defined as such in the late 19th century, had a less-well documented historical role, but in the modern world have established the ability to work at virtually identical tasks and obtained considerable respect for their achievements. There are also cattle handlers in many other parts of the world, particularly South America and Australia, who perform work similar to the cowboy in their respective nations. -wikipedia