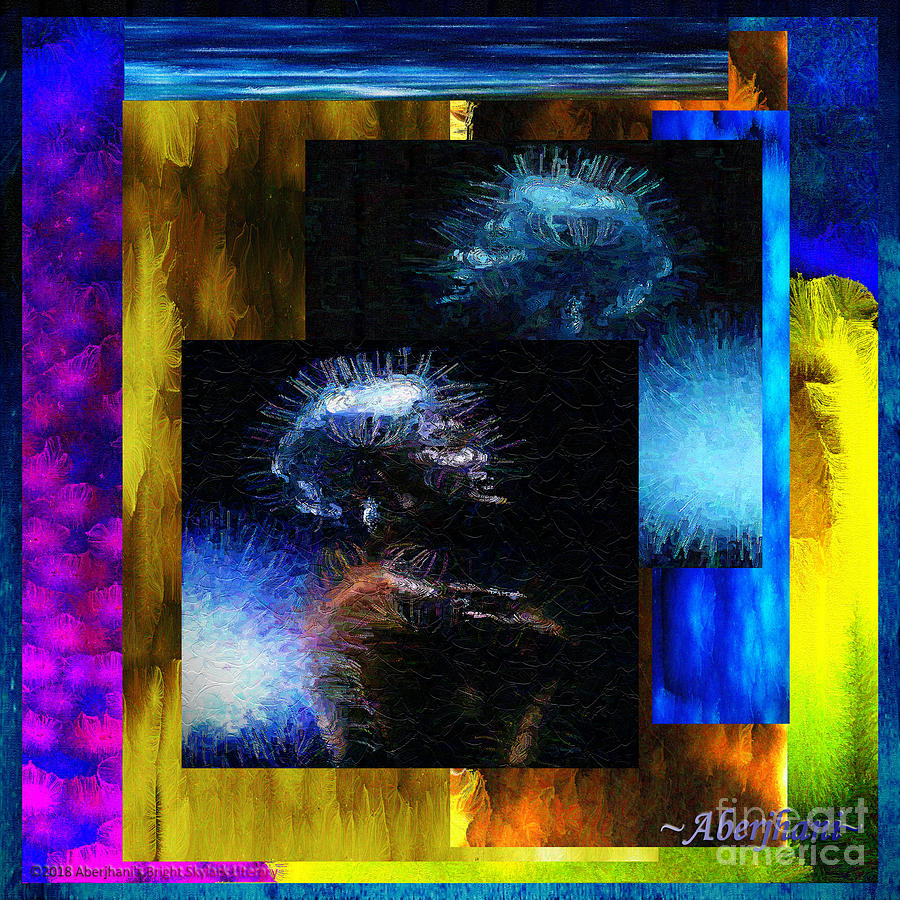 These Colors I Hear When Nancy Wilson Sings Turned to Blue is a mixed media by Aberjhani which was uploaded on December 5th, 2018.

These Colors I Hear When Nancy Wilson Sings Turned to Blue

These Colors I Hear When Nancy Wilson Sings Turned to Blue

Nancy Wilson (b. 1937) is an American jazz song-stylist whose storied career has spanned half a century. In that time she has won 3 Grammy Awards, recorded more than 70 albums, and garnered acclaim from audiences and critics alike around the world. The album/CD which inspired the art seen here is titled "Turned to Blue." It earned Ms. Wilson a Grammy for Best Jazz Vocal Album in 2006.

Her voice was keeping me company in 2018 when a friend alerted me that a vintage broadcast of a 1960s Ed Sullivan variety entertainment TV show featuring the singer was airing one evening. Unlike most of Sullivan's musical guests, Wilson remained onstage to perform two numbers rather than one. That should tell you something about the caliber of her musical artistry.

The song "Turned to Blue" is based on a poem by the late great author Dr. Maya Angelou (1928–2014), and originally titled "My Life Has Turned to Blue," so it is no wonder that her genius plus that of Nancy Wilson's cast a kind of spell over me. What form the results of that spell might take was not something I could imagine until I began meditating on the different colors I seemed to hear--as opposed to see-- when listening to the singer. Rather than go on about how different layers of this piece were constructed throughout the year, I will just add that the expressionistic image of Wilson (the beautiful subject of many photographer's focus) was inspired by lighting and framing used in photographs of her taken by Charles Bush.

I end this description with Angelou's poem-lyrics posted below followed by a YouTube link to Wilson performing the song:

Our Summers gone,
the golden days are through.
The rosy dawns I used to
wake with you
have turned to gray,
my life has turned to blue.

The once-green lawns
glisten now with dew.
Red robin's gone,
down to the South he flew.
Left here alone,
my life has turned to blue.

I've heard the news
that winter too will pass,
that spring's a sign
that summer's due at last.
But until I see you
lying in green grass,
my life has turned to blue.
------Maya Angelou

You can check out Nancy Wilson singing "Turned to Blue" live on YouTube here: https://youtu.be/af4G2fQoo2E

To save 30 percent off the mark-up on this and other Postered Chromatic Poetics artwork from now until December 31, 2018, please use promo code HSPRXZ when checking out.

Thanks Georgia. Those same words frequently pop into my head when I visit your collections.

Thank you Ramon. Appreciate you checking out "These Colors I Hear When Nancy Wilson Sings Turned to Blue."

Glad you liked it Alfonso.

What an appealing artwork, Aberjhani!! Impressive feeling of spatial amplitude and smart use of colors and composition. L/F

I appreciate that very much Angeles. Thank you.

And thank you very much also to ARTIST NEWS for featuring THESE COLORS I HEAR WHEN NANCY WILSON SINGS TURNED TO BLUE. I was unaware of Ms. Wilson's illness when this piece was first posted so am glad I shared it before her passing and am grateful to see it featured.

LOVE the colors and geometrical design

I appreciate that very much Ausra. Looking forward to checking out more of your work.

Thank you very much Barbie. I especially like the idea of this piece as a tapestry because of the elegance conveyed by Ms. Wilson's graceful style.

This is beautiful for a tapestry or blanket!

Much gratitude to ARTS FANTASTIC WORLD for featuring this image.

Such a gorgeous capture with wonderful processing. f/l

Appreciate that very much Geraldine.

Have to acknowledge this piece was only possible because of Nancy Wilson's exceptional talent and beauty.

Like floating dreams. And I love how you 'hear' colors, I get it, because as a deaf person, I hear colors, too. Colors are my music. L/F

This is so beautiful...Ms.Wilson, a legend. Just so wonderful this visual so artistic. Kudos,f.v..VIVA

Thank you VIVA. I had the great pleasure of seeing Ms. Wilson in concert many years ago in Delaware. She is such an awesome talent.