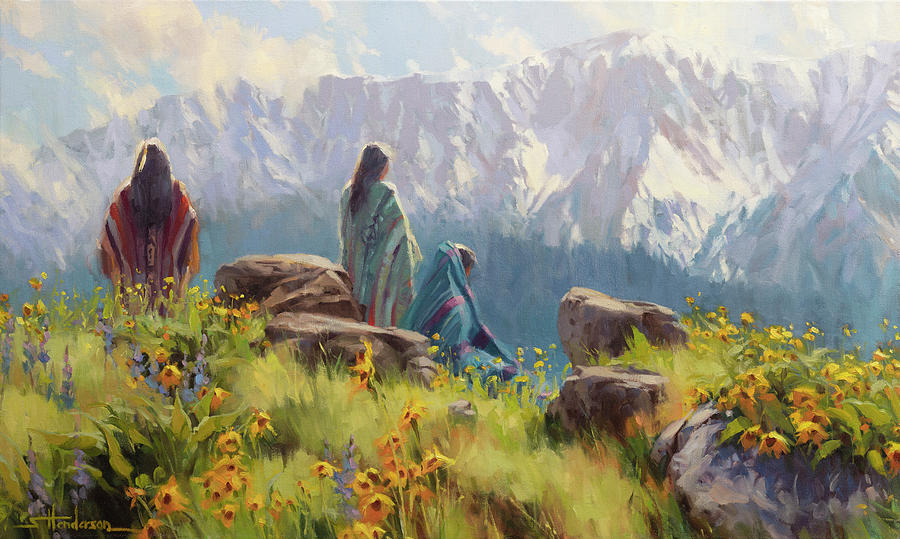 This Was Our Shangri-La is a painting by Steve Henderson which was uploaded on June 19th, 2020.

This Was Our Shangri-La

It was the home of the Nez Perce people, a band led by Old Chief Joseph during the late 19th century. Now we know it as Wallowa Lake in Oregon, an... more

This Was Our Shangri-La

It was the home of the Nez Perce people, a band led by Old Chief Joseph during the late 19th century. Now we know it as Wallowa Lake in Oregon, an area ringed by mountains and filled with trees. It is a beautiful place, a sacred place, and for many many generations a division of the Nez Perce people called this their summer home.

Old Chief Joseph loved and treasured this land. At one point, in the mid 19th century when the lives of the indigenous people of the West were turning beyond their ability to stop it, Old Chief Joseph brought a Presbyterian missionary, Henry Spalding, to the lake.

Joseph thought Spalding was his friend, a man who saw him as his equal, and he brought him here to show him something most dear to his heart. Because that’s what we do with friends – we share our lives with them.

Spalding, however, was not the friend Joseph thought he was. Standing there, side by side with this great and wise man, Spalding looked out at the landscape and saw the possibility for white settlers there. The only thing in the way of such success were . . . the Indians.

The painting, This Was Our Shangri-La, invites the viewer to stand where Joseph and Spalding stood, to see what they saw, what the Nez Perce people saw, in days that were not so very long ago.

It is still a beautiful place. The lake is clear and cold, the mountains majestic as they ring about the water, protectively. Now, tourists come here to paddle about on the water, hike the trails, hear and feel the wilderness silence that the Nez Perce people so treasured.

But the spirit of the Nez Perce is still here, the voices of their children playing echoing in the background to the sounds of today. It is worth knowing the story, reading the history, and pondering upon it.

Because while we ourselves were not there to do what Spalding did, we can choose, today, to not to be as he was. When someone is our friend, a fellow human being, and rightly considers himself our equal, we can honor that.

Congratulations on your sale Steve!

Thank you very much to the buyer from Arizona. May this artwork brighten your home and your heart and be a reminder of the beauty of humanity when it reaches above and beyond the small mindedness of prejudice and greed.

You are a master of light and color! Love this beautiful painting! Sad that we have been so unkind to our fellow man! l/f/t

Thank you, Alana, for visiting, connecting, and sharing your thoughts.

To the buyer from New Mexico: Freedom to roam, to breathe, to think, to ponder, to be with those you love and cherish. May this artwork be a daily reminder of those cherished freedoms AND how precarious they can be when the wrong authorities take power. Enjoy your positive meditations on this artwork!

So love this, resonates with my soul

Beautiful! Congrats on your sale!

Congratulations on your sale, Steve!