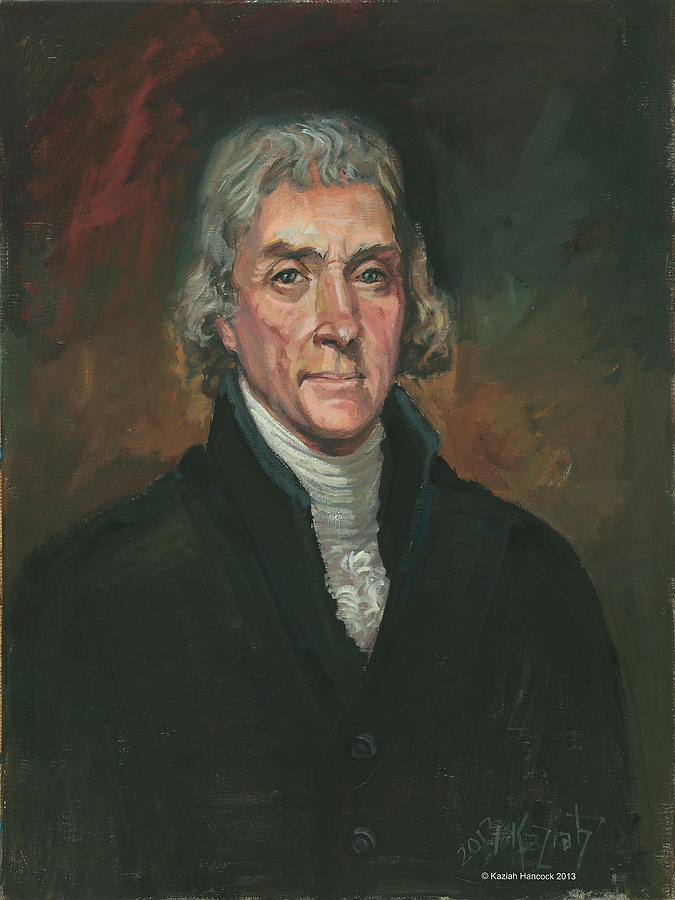 Thomas Jefferson is a painting by Kaziah Hancock which was uploaded on August 16th, 2013.

Jefferson was the first United States Secretary of State (1790–1793) serving under President George Washington. With his close friend James Madison he organized the Democratic-Republican Party, and subsequently resigned from Washington's cabinet. Elected Vice President in 1796, when he came in second to John Adams of the Federalists, Jefferson opposed Adams and with Madison secretly wrote the Kentucky and Virginia Resolutions, which attempted to nullify the Alien and Sedition Acts.
Elected president in what Jefferson called the Revolution of 1800, he oversaw the purchase of the vast Louisiana Territory from France (1803), and sent the Lewis and Clark Expedition (1804–1806) to explore the new west. His second term was beset with troubles at home, such as the failed treason trial of his former Vice President Aaron Burr. With escalating trouble with Britain who was challenging American neutrality and threatening shipping at sea, he tried economic warfare with his embargo laws which only damaged American trade. In 1803, President Jefferson initiated a process of Indian tribal removal and relocation to the Louisiana Territory west of the Mississippi River, in order to open lands for eventual American settlers.
A leader in the Enlightenment, Jefferson was a polymath who spoke five languages fluently and was deeply interested in science, invention, architecture, religion and philosophy, interests that led him to the founding of the University of Virginia after his presidency. He designed his own large mansion on a 5,000 acre plantation near Charlottesville, Virginia, which he named Monticello. While not a notable orator, Jefferson was a skilled writer and corresponded with many influential people in America and Europe throughout his adult life. He is rated by historians as one of the greatest U.S. presidents.
Jefferson opposed slavery all his life in his speeches and writing; but he took little political action to emancipate slaves, owned hundreds of his own, and freed only a fraction of these in his life and will. Since the beginning of his career, controversy has surrounded Jefferson concerning his relationships with his slave Sally Hemings. Owing to DNA and other evidence, the consensus of modern historians is that Jefferson fathered one or more of Hemings' children.
After Martha Jefferson, his wife of eleven years, died in 1782, Jefferson remained a widower for the rest of his life; their marriage produced six children, of whom two survived to adulthood.