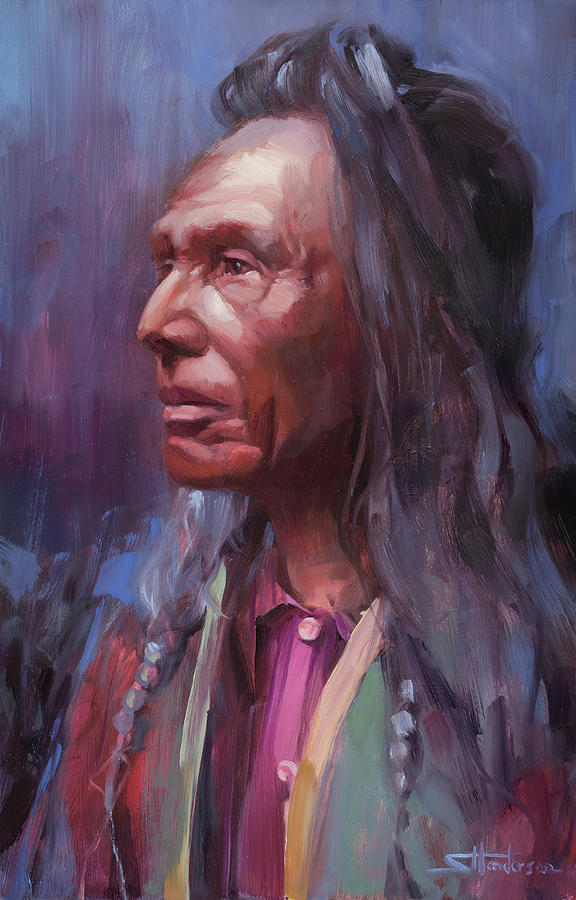 Three Eagles is a painting by Steve Henderson which was uploaded on March 20th, 2018.

Three Eagles was a Nez Perce Indian of the late 19th and early 20th century, said to be an associate of Chief Joseph. The image in this painting is... more

Three Eagles was a Nez Perce Indian of the late 19th and early 20th century, said to be an associate of Chief Joseph. The image in this painting is based upon the 1910 photograph taken by Edward Curtis, in Curtis’s work to document the Native American people and their lifestyle, before that lifestyle had completely disappeared.

But actually, by the time the photograph was taken (the photograph is part of the American Indian Collection housed at Northwestern University), the life and lifestyle of the Indians who lived on the North American continent long before it was “discovered” by Europeans, was already decimated, and many people were relegated to reservations. For the Nez Perce, this initially meant time at a reservation in Oklahoma – far, far from their land in the Pacific Northwest, and resulting in high mortality, both in the process of getting there, as well as in the effort to live there in conditions that were not free, dignified, nor good.

It’s an odd thing, when we think about portraits, we too often associate them with “important people” – like presidents or heads of state, although in our lucid moments, we should ask why a particular position in government accords one person more importance in the world’s eyes than others.

Three Eagles is a portrait of a person who is not a president or an emperor, a statesman or an ambassador, a financial magnate nor a businessman, and indeed, we know little about Three Eagles – who he was, and how he lived. But his is a portrait worth painting, because his is a face that has seen much pain, experienced much in life that is perplexing, carved by time and experience.

Three Eagles, the artwork, is a reminder to us – not only of a history of shame promulgated by a government and people of finance who literally ran a people into the ground – but also that all people are of value, and though we can do nothing about what was done in the past, we can look at the faces we see around us today, and accord our human brothers and sisters dignity and respect.

Third Place Winner in the Miles to Go Before I Sleep contest, sponsored by the Fine Art America Based Masters Advocacy group -- May 2020

Congratulations on your Win in the Famous People contest sponsored by the Greatest of All Time Group!

Well done steve…v..best to you

An excellent portrayal, and a wonderful description.

A word of gratitude to the buyer from Oregon who purchased a print of Three Eagles: I am happy that this artwork connected with your soul. This artwork is of a man whose character and credentials are not written on paper but on his face -- may his countenance be a reminder to hold steady, have strength, look deeper. Enjoy!

A very great capture of a character in an emotional way touching with it's story to define Life with true perspective of self! Marvelous! :)

Congratulations. Your wonderful painting is now featured on Over 3000 Views home page. I am proud to display your talents. Please post it in the appropriate discussion threads for more exposure.