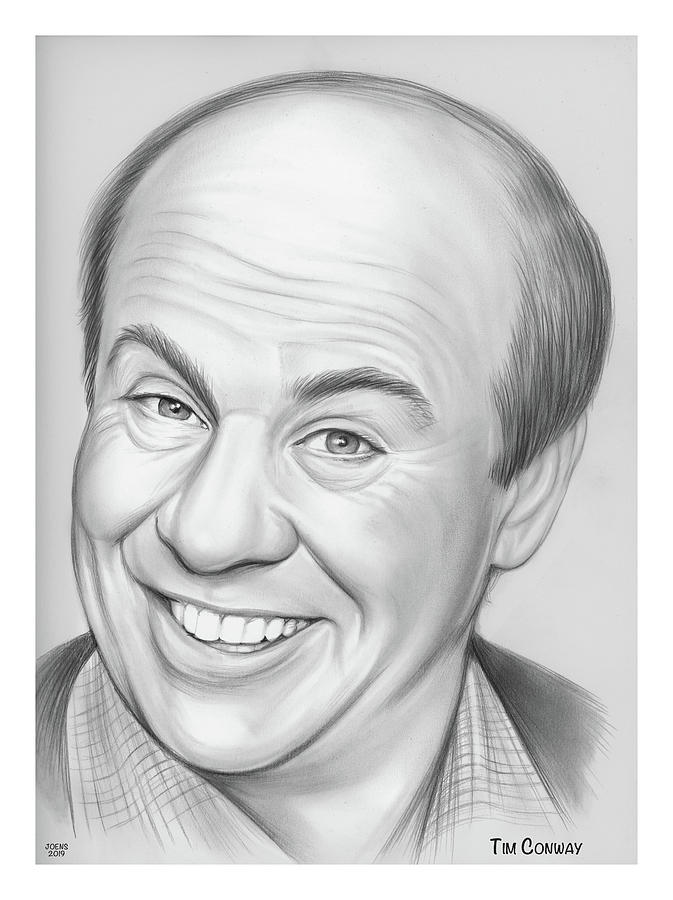 Tim Conway is a drawing by Greg Joens which was uploaded on September 3rd, 2019.

(December 15, 1933 – May 14, 2019) was an American actor, comedian, writer, and director. From 1966 to 2012 he appeared in more than 20 TV shows, TV series and films, portraying different characters in each. Among his more notable roles, he portrayed the inept Ensign Parker in the 1960s World War II TV situation comedy McHale's Navy, was a regular cast member (1975–78) on the TV comedy The Carol Burnett Show where he portrayed his recurrent iconic characters Mister Tudball, Oldest Man and Dumb Private, co-starred with Don Knotts in several films (1979–80), was the title character in the Dorf series of eight sports comedy direct-to-video films (1987–96), and provided the voice of Barnacle Boy in the animated series SpongeBob SquarePants (1999–2012). Twice, in 1970 and in 1980–81, he had his own TV series.

Conway was admired for his ability to depart from scripts with humorous ad libs and gestures, which frequently caused others in the skit to break character while attempting to control their surprise and laughter. He won six Primetime Emmy Awards during his career, four of which were awarded for The Carol Burnett Show, including one for writing.

Conway was diagnosed with normal pressure hydrocephalus in 2018 and had brain surgery, but his health continued to deteriorate and he died on May 14, 2019 from complications of that condition.