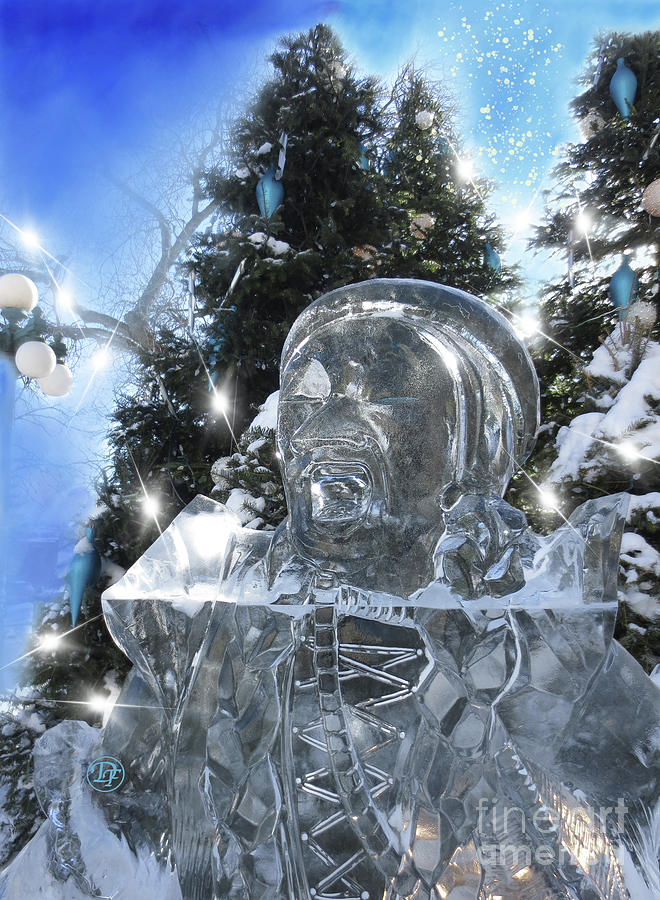 Tintin et son univers - La Castafiore 2 is a mixed media by Dominique Fortier which was uploaded on April 23rd, 2018.

The English version of the greeting card is entitled Tintin/Friends/Decor - Bianca Castafiore 2.... more

The English version of the greeting card is entitled "Tintin/Friends/Decor - Bianca Castafiore 2".

In the series "Tintin/Friends/Decor // Tintin et son univers".
The ice sculpture photo has been shot "in situ", in the touristic Petit-Champlain area [in the Lower part of the city near the St. Lawrence River] during the 2018 Québec Winter carnival. Blue digital enhancement on the background.

Bianca Castafiore, "le Rossignol milanais" [the "Milanese Nightingale], is a fictional character in "Les aventures de Tintin" [The Adventures of Tintin], the comics series by Belgian cartoonist Hergé. She is an opera singer whose demeanor comically aggravates Captain Haddock's ["capitaine Haddock"] stereotyped sea-captain misogyny as she pops up in adventure after adventure. Castafiore is comically portrayed as narcissistic, whimsical, absent-minded, and talkative, and seems unaware that her voice is shrill and appallingly loud. She is also wealthy, generous and essentially amiable, and has a will of iron.

Her forename Bianca means "blanche" [white] (feminine) in Italian, and her surname Castafiore is Italian for "chaste-fleur" [chaste flower]".

(main source of the text: http://en.tintin.com/personnages/show/id/18/page/0/0/bianca-castafiore)
Name: Bianca Castafiore, also known as "le Rossignol milanais" ["the Milanese Nightingale"] because of her association with La Scala opera house in Milan.
Age: According to Hergé she is 45 years old.
Family: Although the press has often reported her engagement to various men, "the Milanese nightingale" has no real family, as far as we know. She travels with her faithful companion, Irma, and her accompanist, Igor Wagner.
The creation of Bianca: As in his approach with Tintin and Haddock, Hergé brings together several ingredients to form the character of Castafiore. First of all he had an aunt, Ninie, who during his childhood would regale the Remi household with her loud and shrill singing to piano accompaniment.

Her performances did nothing to foster a love for music, let alone for opera, in the young Georges Remi to match his early enthusiasm for drawing and later love of the visual arts. In fact, it probably contributed to his inability to discover any appeal in opera, a form of artistic expression that he found rather ridiculous and beyond credibility. "Opera bores me, to my great shame. What's more, it makes me laugh," Hergé admitted. And so, perhaps not surprisingly, he created an archetypical singer who makes us laugh.

From this stereotype, which Tintin and his readers first encounter in "Le sceptre d’Ottokar [King Ottokar's Sceptre]", Hergé refines and develops the character of Castafiore as he deploys her in subsequent adventures.
La Callas, un modèle: It was in the 1950s when the newspapers and magazines such as Paris-Match, a favourite source of material, were full of the sensational opera career and private life of Maria Callas that Hergé found his real model for Castafiore. The 1950s were Callas's golden years when she was winning worldwide acclaim for her legendary performances in Milan, New York, Chicago, London and Paris.
A celebrated aria: Bianca's calling card aria - sung throughout the adventures - was typically an inspired choice by Hergé: the "Jewel Song" from Charles Gounod's grand opera "Faust", florid, dramatic, demanding the greatest virtuosity, it describes the moment in Goethe's tragedy when the young Marguerite finds the casket of jewels left by Mephistopheles, tries them on and, regarding her reflection in a mirror, is dazzled by what she sees.

The music breaks into waltz time as she declaims: "Ah, my beauty past compare: these jewels bright I wear! Was I ever Margarita?" ["Ah! Je ris de me voir si belle en ce miroir. Est-ce toi, Marguerite, est-ce toi?"]

A passion for jewels: While singing about jewels, like Maria Callas she has an obsession with them. The famous emerald central to the plot in "The Castafiore Emerald" is matched by any emeralds possessed by Callas, who was a passionate and discerning collector of fine jewellery.

In fact, it bears a remarkable resemblance to a claw-set emerald (weighing 37.56 carats) and diamond ring auctioned by Sotheby's in Geneva in November 2004 - 27 years after the diva's death. Regarding Castafiore's emerald, we learn from her - between sobs - that it was a gift from the Maharajah of Gopal.

Evolution of the character: Meanwhile from being the rather matronly and frumpy dramatic soprano first encountered in 1938-39, Castafiore becomes - à la Callas - super elegant and fashionable. She is rejuvenated and is certainly more attractive in "Tintin et les Picaros [Tintin and the Picaros]", than 38 years earlier at her initial meeting with "Tintin en Syldavie [Tintin in Syldavia]."

Such is the transformation that one should not be totally surprised by Professor Calculus's ["professeur Tournesol"] apparent infatuation with the diva in "Les bijoux de la Castafiore [The Castafiore Emerald]."
(main sources of the text: http://en.tintin.com/personnages/show/id/18/page/0/0/bianca-castafiore; https://fr.wikipedia.org/wiki/Les_Aventures_de_Tintin)

THE FINE ART AMERICA WATERMARK WILL NOT APPEAR ON ANY PURCHASED PRODUCT.

Dominique Fortier has created this artwork suitable for square prints up to 35.250" x 48.000".
Buy your iPhone or Galaxy case as well as T-SHIRTS and/or other apparels with this art at:
http://dominique-fortier.pixels.com/
Copyright Dominique Fortier, 2018. All rights reserved.

The English version of the greeting card is entitled "Tintin/Friends/Decor - Bianca Castafiore 2".