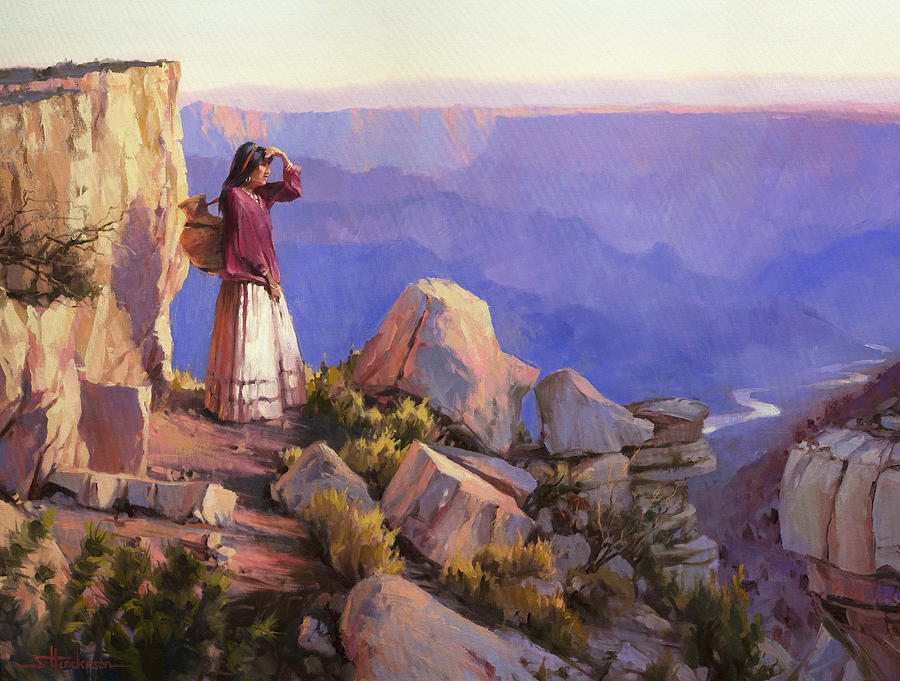 Turning Point is a painting by Steve Henderson which was uploaded on August 29th, 2019.

Throughout history, when two cultures meet, there is generally conflict.

Throughout history, when two cultures meet, there is generally conflict.

So it was in the United States during the 18th, 19th, and 20th centuries, when the “white” culture transported from Europe met, and clashed with, the indigenous people who had lived here for millennia. To say that there was conflict is an understatement of massive proportion.

It’s not talked about much or taught in our schools, other than in classic (boring) textbook fashion, dryly listing out the catastrophic events in a paragraph or two, with the most important thing for the student to remember, and be tested upon, being a series of names, dates, and battle venues.

But the changes, the impact, the violence, the destruction happened to real people – children, women, men, families – and a way of life came to an incontrovertible end. One of the sadnesses of this, among many others, is that the U.S. economic-based culture, which “won,” so eliminated the culture of the myriad indigenous peoples that we are unable to learn from their many many years of history, their rich background, their chronicle of the past:

How did they see life?

What was their way of looking at things?

What were their thoughts on why we exist?

When differing ways of looking at things, differing cultures, are eliminated, the whole world loses, because we lose a depth of perspective that can help us change and learn and grow. We know only the way we think, or are taught to think, and are not challenged by the different, the unusual, the unique.

The artwork, Turning Point, shows an indigenous woman in the midst of her day, a day that looks like the one before and, she presumes, like the ones to follow. But in hindsight, we know this is not so.

Dressed in early 20th century U.S. culture period clothing, she carries a traditional pottery piece on her back – she blends the old and the new, and tries to fashion a life incorporating both. Stopping in the midst of her activities, she turns back, eyes shaded from the sun, to look – into the timeless grandeur of the canyon.

What does she see?

Turning Point is painted from a scene in the Grand Canyon, Arizona.

Beautiful! Congratulations on your sale. Fav

Blessings on your sale