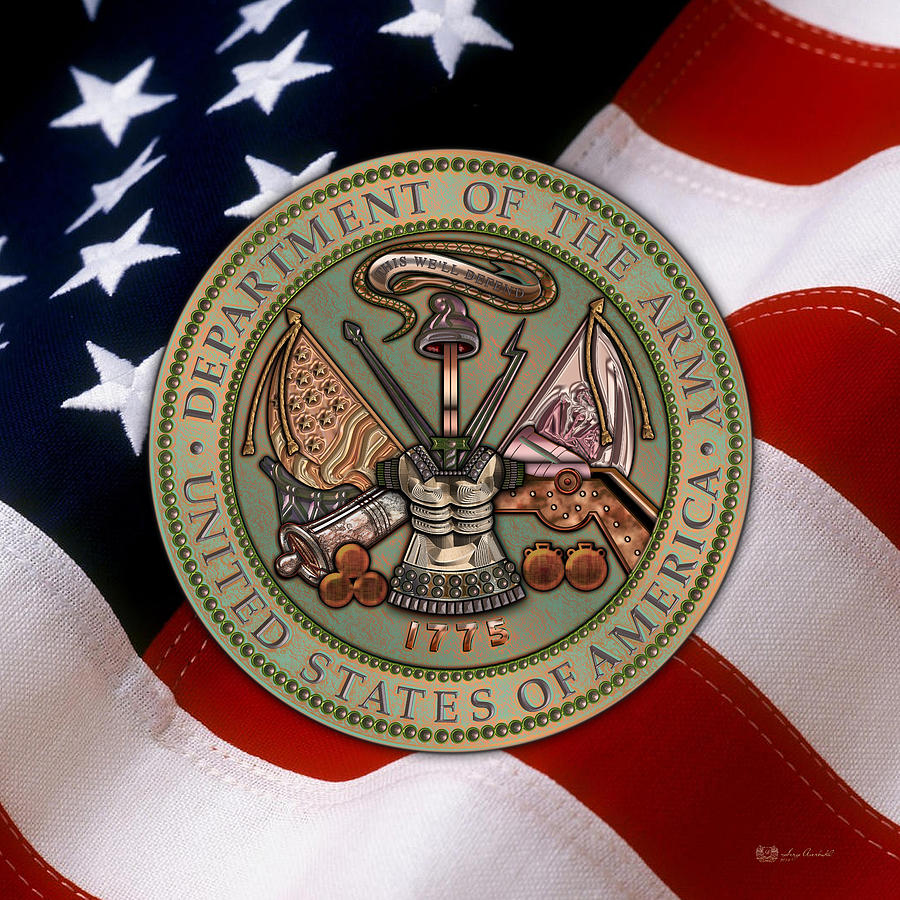 U. S. Army Bronze Seal Over American Flag. is a piece of digital artwork by Serge Averbukh which was uploaded on February 13th, 2014.

Introducing 'Military Insignia & Heraldry' collection by Serge Averbukh, showcasing military and government heraldry artwork.. Here you will find framed and wrapped/stretched canvas fine art prints, featuring the U.S. Army Bronze Seal over American Flag.
The United States Army is the main branch of the United States Armed Forces responsible for land-based military operations. It is the largest and oldest established branch of the U.S. military, and is one of seven U.S. uniformed services. The modern Army has its roots in the Continental Army which was formed on 14 June 1775, before the establishment of the United States, to meet the demands of the American Revolutionary War. The Congress of the Confederation officially created the United States Army on 3 June 1784 after the end of the revolutionary war to replace the disbanded Continental Army.
The Army is a military service within the Department of the Army, one of the three military departments of the Department of Defense. The Army is headed by the Secretary of the Army, and the highest ranking military officer in the department is the Chief of Staff of the Army.
The Department of the Army Seal and the Department of the Army Emblem are, respectively, the official seal and emblem of the Headquarters, U.S. Army (formerly, of the War Department). The "War Office Seal" was created in 1778 and the Emblem was developed out of the seal and approved in 1974. The Army Seal was used originally during the American Revolution to authenticate documents. It remained unchanged until 1974, when the War Office banner was replaced with "Department of the Army" and the date was changed to 1775, the year in which the Army was established. The seal embodies the Army's ideals of loyalty, vigilance, perseverance, truth, courage, zeal, fortitude, remembrance, determination, constancy, achievement, dignity, and honor. Prior to the establishment of the "Department of the Army Emblem," there was no official display item to identify the Army. The Seal had traditionally been used to authenticate documents only. In recognizing the need to provide a display item, The Secretary of the Army approved the emblem design as the official emblem to represent the Army on January 29th, 1974.