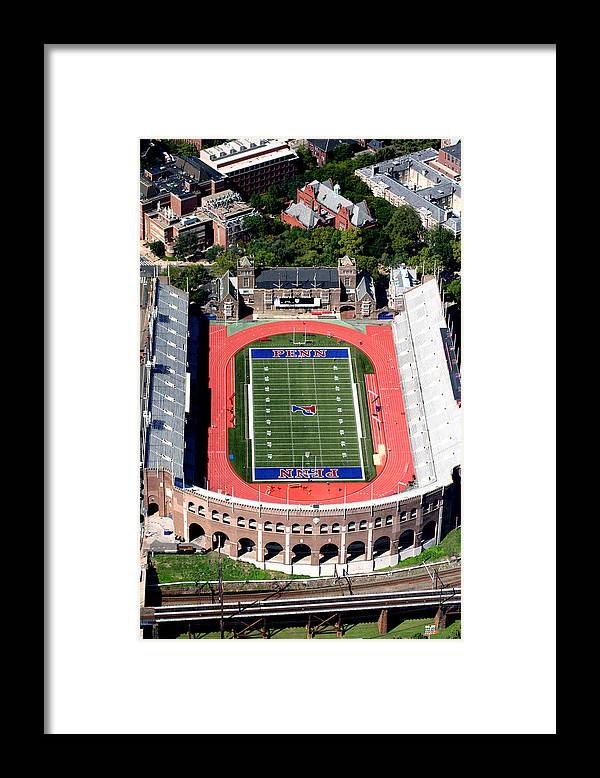 University of Pennsylvania Franklin Field S 33rd Street Philadelphia framed print by Duncan Pearson.   Bring your print to life with hundreds of different frame and mat combinations. Our framed prints are assembled, packaged, and shipped by our expert framing staff and delivered "ready to hang" with pre-attached hanging wire, mounting hooks, and nails.

This aerial photograph of, the University of Pennsylvania's stadium, Franklin Field, is from one of my photo flights over Philadelphia, Pennsylvania.... more

Amazing photo! Congratulations on your sale!

Nice! Congratulations on your sale! F

That is a magnificient view. Congratulations on the sale.

Congrats on the Sale Duncan!!

wonderful, congatulations on your sale

Franklin Field is so eye-catching from the air. The field really popped in this aerial because they had just laid new AstroTurf on the field.

We love this print! It was packed well and received in excellent condition. We get so many compliments on this beautiful print and would definitely order from this company again.

The photo and framing are wonderful, exactly as customized on the your web site. Excellent quality overall.

Framework and matting well done. Arrived early and nicely packaged. I am very pleased with this purchase.

I am really pleased with this print. It took me forever to find this artist and print. The framing is perfect for my kitchen and really adds value to the room.

Stunning print Iconic photo , present for my son who had a surprise trip to Nashville, He is going to love this print. Perfect frame and arrived when was expected. Many thanks

This aerial photograph of, the University of Pennsylvania's stadium, Franklin Field, is from one of my photo flights over Philadelphia, Pennsylvania. It caught my eye because they had just installed new turf on the field and the colors really jumped out. The stadium is used for football, field hockey, lacrosse, sprint football, and track and field (and formerly for soccer and baseball). It is also used by Penn students for recreation, and for intramural and club sports, including touch football and cricket, and is the site of Penn's graduation exercises, weather permitting. It is located in Philadelphia, Pennsylvania, at the eastern edge of Penn's campus, across the Schuylkill River from Center City. It is the home of the Penn Relays and was formerly the home field of the Philadelphia Eagles of the National Football League. By Duncan Pearson.

Duncan Pearson, Aerial Photographer & Author (215) 760-5132 - duncpearson@gmail.com As an aerial photographer I use helicopters and small planes to gain an aerial vantage point. Most of my work is commissioned by the commercial and residential real estate and construction industries. Over the last ten years I've completed custom aerial photography assignments of Brandywine Realty Trust, Harrah's Entertainment, Six Flag's Great Adventure, The Flynn Company, Coldwell Banker Preferred, Madison Development, Liberty Property Trust, The University of Pennsylvania and many other corporations and institutions. Fine Art America is the best way I've found to make it easy for my patrons to navigate to the pieces they are interested in and...