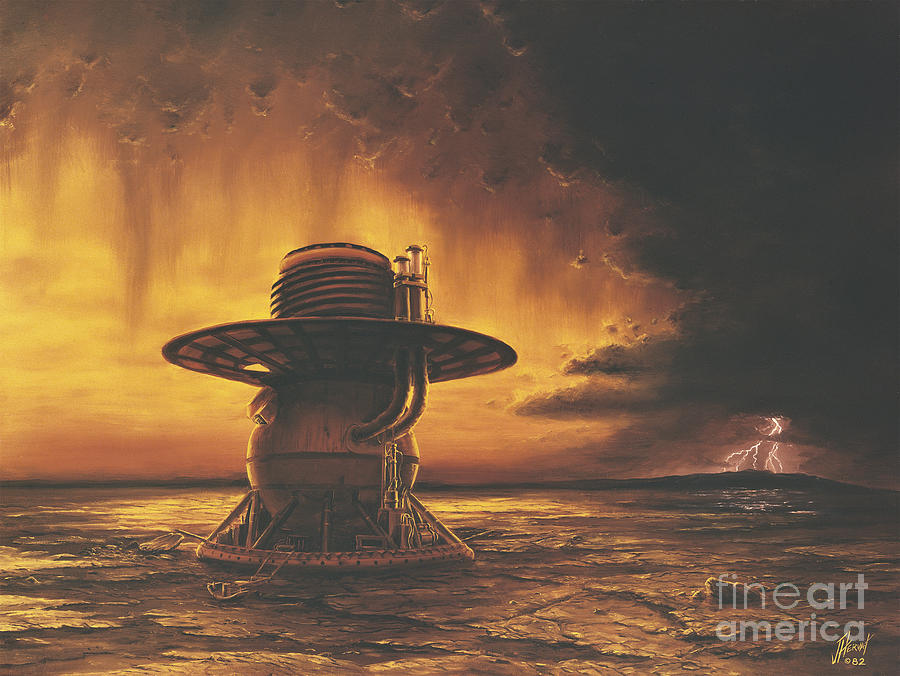 Venera 14 On Venus is a painting by James Hervat which was uploaded on July 2nd, 2017.

The distinctive appearance and design of the later Venera landers arose from lessons learned from earlier mission failures. Some of these earlier attempts made the months-long journey to Venus and successfully entered the planet's atmosphere, only to cease telemetry before reaching the surface. While other factors contributed to the failures, the landers' design was simply inadequate for the extreme conditions they would encounter.

When viewed from Earth, brilliant Venus presents a serene visage in our sky, but beneath the planet's cloud cover conditions are hostile--the word "hellish" is frequently used to describe the landscape. Blanketed by a thick carbon dioxide atmosphere, Venus' landscape is constantly subjected to temperatures of nearly 900 degrees Fahrenheit, consequence of a runaway greenhouse effect. Atmospheric pressure is a crushing 90 times that of Earth, equivalent to 3,000-foot ocean depths on our planet. Any spacecraft that attempts to reach the surface must first run a gauntlet of lightning-streaked sulfuric acid clouds. Venus is not a very welcoming destination.

The conventional parachutes used by the first landers proved to be their undoing. In the dense air, the parachutes made for an agonizingly slow descent, pressure-cooking the lander's instrumentation before it reached the surface. Later designs incorporated parachutes as well as a circular airbrake. The parachutes were released at higher altitudes. Then, using the airbrake only, the lander traversed the remaining distance to the surface more rapidly, buying more operational time for its instruments.

The redesigned Veneras 13 and 14 successfully sent images from their landing sites. Venera 13 lasted two hours and 14 lasted one hour.

Forty years ago,these pioneering Soviet missions to the hostile environment of Earth's so-called "sister planet" gave graphic evidence and dire warning of the consequences of a carbon dioxide unbalance in a planetary atmosphere. This, along with mountains of scientific evidence gleaned since, sadly still goes widely unheeded by inhabitants of our own planet, even as we watch the catastrophic effects of our changing climate.

Artist's note: The 1980’s period of glasnost saw an increase in the exchange data from planetary missions between U.S. and Soviet scientists. At this time I had the honor of personally presenting prints of this painting and another depicting one of the Vega Venus landers to Soviet planetary scientist Valery Barsukov, then Director of Moscow’s Vernadsky Institute. This presentation took place at the 1986 Lunar and Planetary Science Conference at the Johnson Space Center in Houston, and was arranged by planetary scientists from Brown University.

Best wishes and many thanks to the buyer from Tel Aviv-Yafo. Israel for your purchase of the large print!