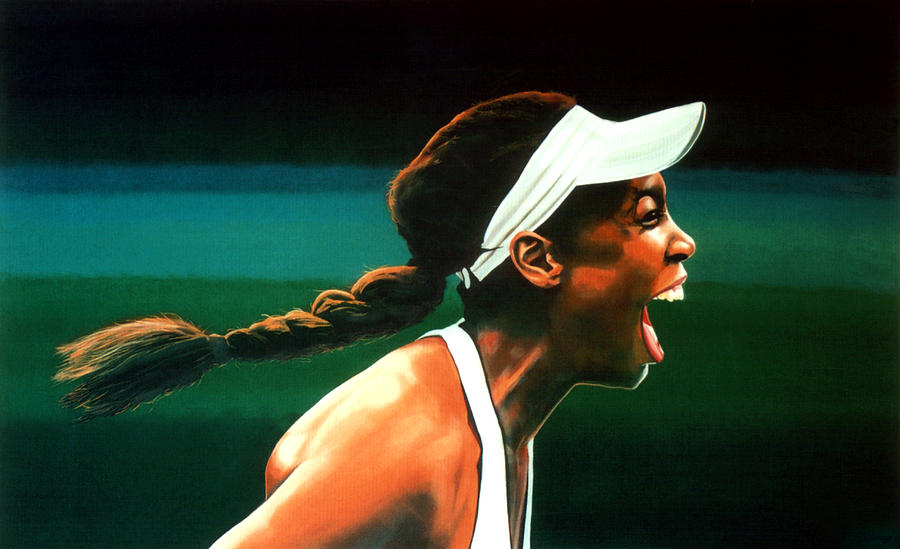 Venus Williams is a painting by Paul Meijering which was uploaded on May 5th, 2013.

Venus Ebony Starr Williams (born June 17, 1980) is an American professional tennis player who is currently ranked world No. 5 in the WTA singles rankings. She is generally regarded as one of the all-time greats of women's tennis and, along with younger sister Serena Williams, is credited with ushering in a new era of power and athleticism on the women's professional tennis tour.
Williams has been ranked world No. 1 by the Women's Tennis Association on three occasions, for a total of 11 weeks. She first became the world No. 1 on February 25, 2002, the first African American woman to do so in the Open Era. Her seven Grand Slam singles titles puts her in a tie for 12th on the all-time list, and a tie for 8th on the Open Era list, more than any other active female player except her sister Serena. In total she has reached sixteen Grand Slam finals, the most recent being the finals at Wimbledon in 2017. She has also won 14 Grand Slam Women's doubles titles, all with her sister Serena, and the pair are unbeaten in Grand Slam doubles finals; Venus also has two Mixed doubles titles. Her five Wimbledon singles titles ties her with two other women for eighth place on the all-time list, but gives her sole possession of No. 4 on the Open Era List, only trailing Navratilova's 9 titles and Serena's and Graf's 7 titles. From the 2000 Wimbledon Championships to the 2001 US Open, Williams won four of the six Grand Slam singles tournaments held. At the 2017 Wimbledon Championships, Williams extended her record as the all-time leader, male or female, in Grand Slams played, with 75. Williams' run to the 2017 Wimbledon singles final also broke the record for time elapsed between first and most recent grand slam singles finals appearances.

Your Sports and Figure paintings are really good. Thanks for joining my figure group.

Thank you so much, Susan, for your compliment and accepting me in your group!;-)

Very strong impact photo! I like a lot tennis! L