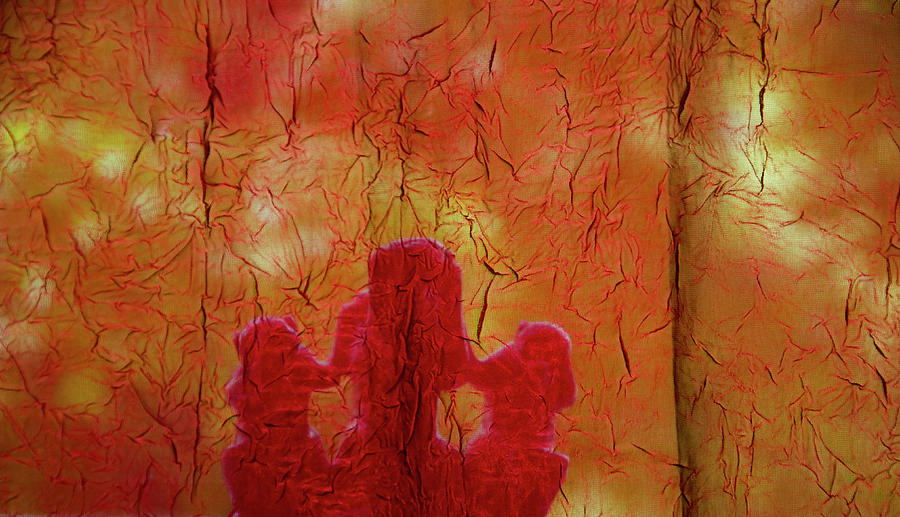 Vermillion Blush is a photograph by Jim Cook which was uploaded on May 27th, 2020.

Art, whether it be a painting or photograph or any other form, can be said to have many purposes. Those may include entertaining, informing,... more

Art, whether it be a painting or photograph or any other form, can be said to have many purposes. Those may include entertaining, informing, persuasion and self-expression.
Self-expression is where I find myself most days. I like to present a concept through my imagination.
Often the concept is deep within my sub conscious, and only becomes evident during the process of experimenting with different technique’s, bringing an image to full realization.
And there are times when, what I thought I was saying, turns out not to be the case at all. That is the story behind this image.
I composed the shot using a prop along with a texture I recently made and composed it through my studio window using the late afternoon sunlight poking through branches of a tree.
In my mind I saw only one result for my efforts, but couldn’t come up with a title. I decided to post it to FB as a contest. Whoever came up with a winning suggestion would receive a matted, signed print.
The very first suggestion came in and opened my eyes to other possibilities of what it could represent. They suggested “Autumn Lights”. A second suggestion soon arrived “Vermillion Blush” which gave me pause, and a third “Into the Fire” came with description of what the viewer said it represented to her. She said she saw a newly single mother and her two small children facing the fiery challenge of the unknown, but walking into it with bravery and determination.
A couple more notable ones also followed including “Life Is a Jigsaw Puzzle” and a headscratcher “The Aboriginal Woman’s Fever Dream”. Which unbeknownst to me is a thing.
Another friend thought it can easily be tied into todays world events regards the Pandemic and quarantines.
I selected Vermillion Blush as the winning title, partly because it does make one think about its meaning, and hopefully opens inquisitive minds to explore the image further.

Congratulations! I have selected this piece to be featured in the Art for the Love of Art group.

Congratulations! on this unique image’s being Featured in “The Artistic Aperture” group, and also Liked, Favorited, and Facebooked.

Thanks very much for the feature in the "Artistic Aperture" group!

BRAVO! Your artwork has earned a FEATURE on the homepage of The Artists Group, 10/3/2020! You may also post it in the Group's Features discussion thread and any other thread that fits!

Thank you Jenny, this feature is much appreciated!

great title for this abstract art

Beautiful art piece, and I enjoyed the accompanying commentary!

Thank you March, very much appreciated!

Very unique and love your description of how you created and peoples takes on it. That's why I love art, being seen and affected differently by all that stop to study it.

Thanks Carissa, I agree

Thanks very much Heather!

John, thanks very much!

for my vote for a title.. I get 'Hanging Her Head'. The only thing I can see is a woman with long hair, kneeling, with cloth draping from her extended arms while she hangs her head forward. Thank you for the inspiration, I'll be creating what my brain can't un-see for a photo soon ;) :)

Thank you so very much!

Love the discussion, Jim. I see the image of a mother holding tight to her two children as they walk into the uncertainty ahead ...

Thanks Joe! I think it relates very easily to what has been going on in the world as of late.