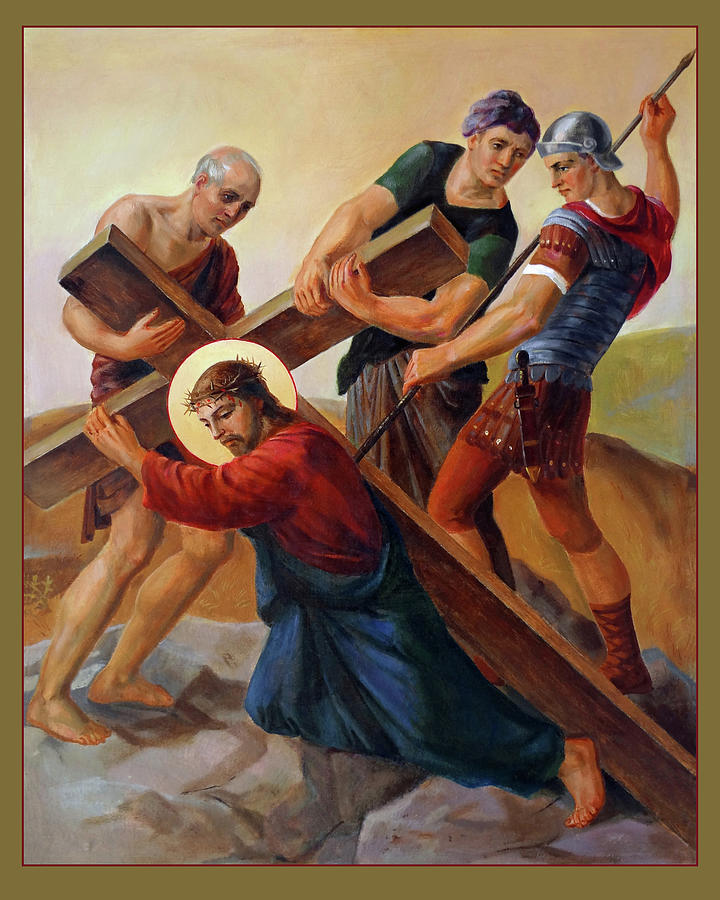 Via Dolorosa - Stations Of The Cross - 3 is a painting by Svitozar Nenyuk which was uploaded on February 7th, 2009.

Via Dolorosa - Stations Of The Cross - 3

Stations Of The Cross. Jesus Falls The First Time Under The Cross.
This third Station represents how our Lord Jesus Christ, overwhelmed by the... more

Via Dolorosa - Stations Of The Cross - 3

Stations Of The Cross. Jesus Falls The First Time Under The Cross.
This third Station represents how our Lord Jesus Christ, overwhelmed by the weight of the Cross, fainting through loss of blood, falls to the ground the first time. His flesh was torn by the scourges, His head crowned with thorns, and He had lost a great quantity of blood. He was so weakened that He could scarcely walk, and yet He had to carry this great load upon His shoulders. Jesus was fatigued to the point of death. He had not slept since Wednesday night, and had been on His feet for the last fifteen hours. He was hungry, thirsty, and His body, aching from sheer weariness as well as from the wounds of the scourging, was caked with blood and dirt. Above all, His Sacred Heart grieved at the malice, selfishness, and injustice of man. The soldiers struck Him rudely, and thus He felt several times in His journey.
The Way of the Cross. Station 3.
Passion of Christ. Way of Sorrows.
Via Dolorosa. Way of the Cross.
Estaciones de la Cruz. Droga Krzyzowa.
Jesus falls the first time. Via Crucis.
Featured in the Fine Art America Groups:
Christian Art and Photography – January 3, 2014
Christian Theme Artwork - July 12, 2014
Catholic Art Galleries – October 19, 2015

Wonderful art! Congrats on your sale!

Svitozar, congratulations on your sale of this wonderful painting!

It's called THE GREATEST STORY EVER TOLD, the story of eternal salvation. Your masterpieces really drive that point home in such a spectacular way.

Congratulations! All knees will bow before the King of Kings. .

Marvelous painting and interpretation of the story, Svitozar!

You do amazing work lf

Great composition of the angles balancing each other. Very emotional painting. Congratulations!