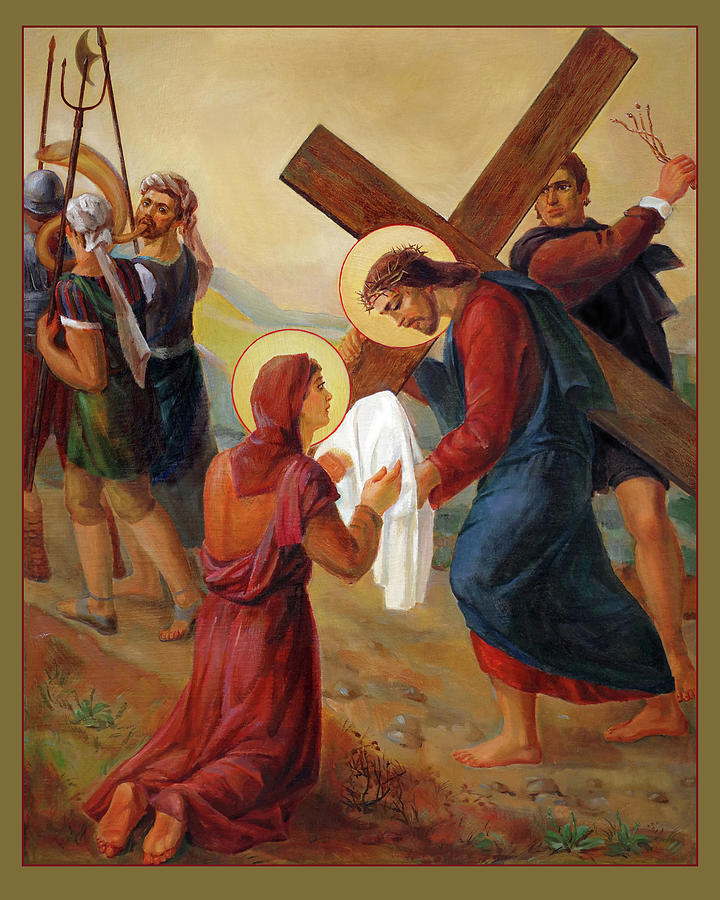 Via Dolorosa - Veil Of Saint Veronica - 6 is a painting by Svitozar Nenyuk which was uploaded on February 7th, 2009.

Via Dolorosa - Veil Of Saint Veronica - 6

Stations of the Cross. Veronica wipes the face of Jesus. ... more

Via Dolorosa - Veil Of Saint Veronica - 6

Stations of the Cross. Veronica wipes the face of Jesus.
Station number six.
The sixth Station represents the place where the pious Veronica, compassionating our agonizing Redeemer, beholding His sacred face livid with blows and covered with blood, dirt and sweat, presents a veil, with which Jesus wipes His adorable face, living on it the impression of His holy countenance. There was so little she could do for Him, but she did it, closing her eyes to the scorn of the crowd. She did it with love and received in return a priceless image of our Lord. The cloth she used is said to have preserved the imprint of Christ's features. There is, at Saint Peter's in Rome, a cloth venerated as the original veil of Veronica, but the features of the image on it are very difficult to distinguish, and it is impossible to judge its authenticity. Her name is not important to us: the incident is. It is quite possible that a compassionate woman wiped the face of our suffering Lord, and Christians do well to ponder her action.
Via Dolorosa. Saint Veronica. Way of the Cross.
Passion of Christ. Way of Sorrows. Christ Carrying the Cross to His Crucifixion. The Shroud of Saint Veronica.
The Way of the Cross. Station 6. Via Crucis. Kryziaus kelias.
Kreuzweg. Droga krzyzowa. La Pasion de Cristo.
The holy woman named Veronica, seeing Jesus so afflicted, and His face bathed in sweat and blood, presented Him with a towel with which He wiped His adorable face, leaving on it the impression of His holy countenance.
Featured in the Fine Art America Groups:
Catholic Art Galleries - April 6, 2014
Christian Theme Artwork - July 12, 2014
1000 Views On 1 Image – January 23, 2020

Very beautiful! Congrats on your sale!

Congrats for the work and the sale

Congrats on your Stunning work and sale :!!