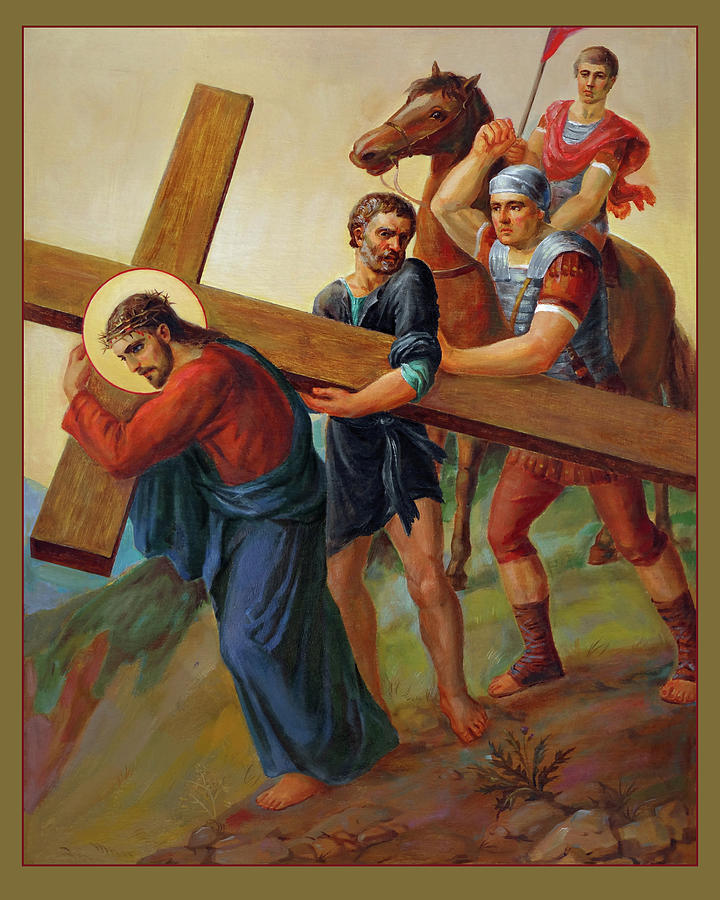 Via Dolorosa - Way Of The Cross - 5 is a painting by Svitozar Nenyuk which was uploaded on February 7th, 2009.

The Way of the Cross.
Station 5.
Christ assisted by Simon the Cyrenean to carry the Cross.
The fifth Station represents Christ fainting,... more

The Way of the Cross.
Station 5.
Christ assisted by Simon the Cyrenean to carry the Cross.
The fifth Station represents Christ fainting, destitute of strength, unable to carry the Cross. His sacrilegious executioners compel Simon the Cyrenean to carry it, not through compassionate pity to Jesus, but lest He should expire in their hand, before they could glut their vengeance by nailing Him to the Cross. Taking advantage of his power to requisition aid in such emergencies, the centurion had his men seize a passer-by and ordered him to take up the condemned man's cross. This conscript was a man named Simon of Cyrene, probably a member of the colony of Cyrenaic Jews in Jerusalem. He was on his way into the city when the centurion stopped him, and as the great cross was laid on his shoulders and he was forced to follow Jesus toward Golgotha, he undoubtedly wished he had taken a different road. However though his help was now given grudgingly, it is believed that he was an early convert to Christianity: according to an ancient tradition , Alexander and Rufus, who accompanied Saint Peter to Rome and whom Saint Mark names as sons of Simon, were sons of this Cyrenean.
Jesus Christ. Way of Sorrows.
Passion of Christ.
Via Dolorosa. Via Crucis.
Kreuzweg. Droga Krzyzowa
Kryziaus kelias. La Pasion de Cristo.
Way of the Cross.
Featured in the Fine Art America Groups:
Christian Art and Photography – March 25, 2014
Christian Theme Artwork – May 25, 2014
Catholic Art Galleries – August 8, 2018

Amazing detail and expression in this beautiful painting Svitozar! LF

Excellent! Congratulations on your sale, Svitozar!

A wonderful progression of all these stations! Great work!

Wonderful your gallery and your paintings, Svitozar. Very realistic....L/F. Congratulation on your sale.

One of your peers nominated this image in the 1000 views Groups nominated images by your fellow artist in the Special Features #13 promotion discussion. Please visit and pass on the love to another artist.

CONGRATULATIONS!! Your beautiful artwork has been Featured by the - CATHOLIC ART GALLERY - Artist Group on Fine Art America / PIXELS! Thank you for sharing it !! http://tinyurl.com/CatholicArtGallery

So happy for your sale. Congratulations!!

Thanks for this reminder of His sacrifice, Svitozar. Congratulations. - Mike

Mary Ann, You are too kind and I thank you so much!

Great and Congratulation on sale announcement.