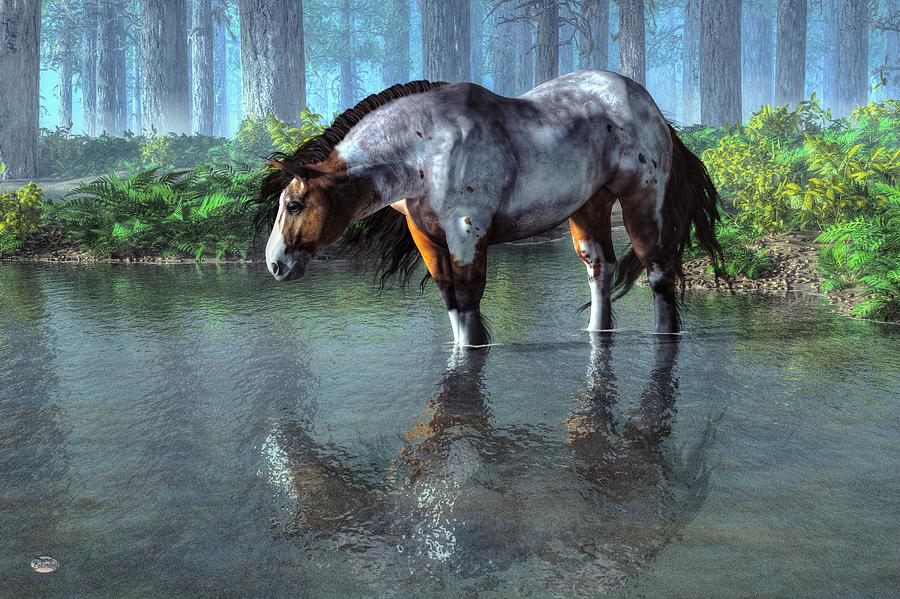 Wading Horse is a piece of digital artwork by Daniel Eskridge which was uploaded on June 10th, 2014.

A muscular brown and white horse with a black mane and tail wades into shallow forest pond and gazes at its reflection. Perhaps this wild mustang is... more

A muscular brown and white horse with a black mane and tail wades into shallow forest pond and gazes at its reflection. Perhaps this wild mustang is about to drink or simply is watching the fish. Maybe it is lonely and looks to its mirror image as a companion. I, however, prefer to think that horse is sort of the equine version of Narcissus, the mythological Greek hunter who was in love with his own reflection (and the source of the word narcissist).

For this image, I started with the idea of a pine forest with a blue glow to it, hence, the background. It was later that I came up with the idea for the foreground horse after seeing someone riding a horse by a lake. I liked the idea of reflecting the horse in the water. Also, in this image, I like the way the brown spots on the horse's coat worked with the blue and green of the environment.


About how I create my artwork:

Rather than traditional forms of art such as painting or photography, I use a computer to create my images., It's called 3D Rendering and works like so: I make a scene by sculpting and arranging digital models in a virtual 3D space., After stipulating lighting and atmospheric effects, I have the computer create a simulated environment from which I take a virtual snap shot of the scene. Then, using image editing software and something more akin to traditional painting techniques (via a Wacom tablet), I go over the work adjusting colors, adding brushwork, painting in details, etc. to produce the final image. Software I use includes: Sculptris ZBrush, Blender3d, Vue, Daz Studio, and GIMP.

Thanks for looking!
Daniel Eskridge

Great! Congrats on your sale!

Daniel, this is beautiful! F/L

Phenomenal. Great mood and lost and lost in thoughts. L/F

Amazing, stunning, beautiful. Not enough words in the English language to describe this and all your other fine pieces...........vf

Thanks Daniel. Your work is just amazing! I hope you are selling lots of prints.

Your work is amazing, Daniel. Thanks for your comments about my painting.