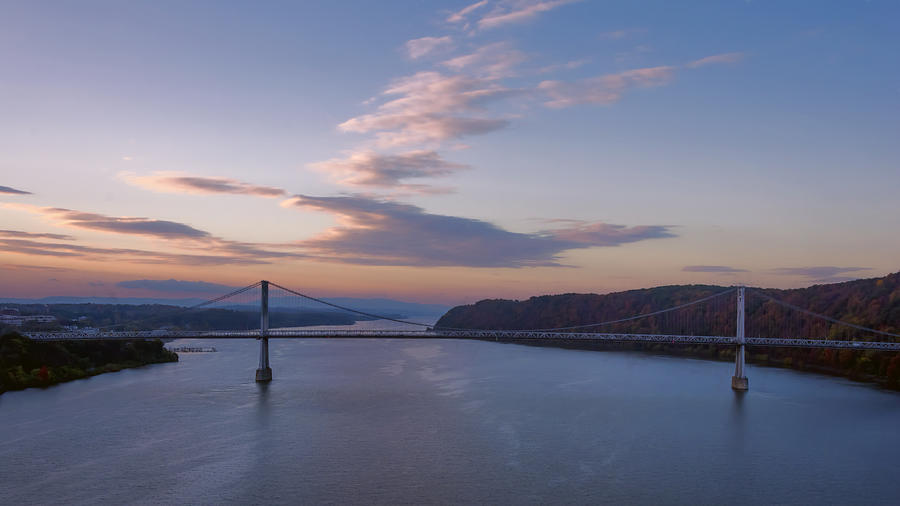 Walkway Over The Hudson Dawn is a photograph by Joan Carroll which was uploaded on November 9th, 2014.

Walkway Over The Hudson Dawn

In my attempt to take some sunrise photos from the Walkway Over the Hudson in Poughkeepsie NY, being way too early worked out for the best. All... more

Walkway Over The Hudson Dawn

In my attempt to take some sunrise photos from the Walkway Over the Hudson in Poughkeepsie NY, being way too early worked out for the best. All during several days of driving through the Hudson River Valley, I kept seeing signs for the 'Walkway Over the Hudson' and I was intrigued. On my last evening in Poughkeepsie, I saw the sign once again and I knew what I had to do the next morning! I made sure the my camera battery was charged, and the next morning packed up everything, throwing the charger into my suitcase. I got to the parking area, gathered my equipment, and started my hike. It's at least 1/4 mile along the pathway from the parking lot before you even get to a place over the river edge. I walked a bit more, then set up for some early photos. Nothing. No power. How could that be? I charged the battery! Then that awful sinking feeling came over me and I checked the battery compartment. Sure enough, no battery! It was still on the charger...which was in my suitcase... in the trunk of the car....nearly a half mile away! So I did my best speedwalking back to the car, since sunrise doesn't wait! Got the battery and put the speedwalking into overdrive on the way back. What had started out as elation at being on the walkway way above the river turned to frustration and then back to elation. I was going to make it! And how can your mood not lift on such a beautiful autumn morning?! And standing 212 feet above the Hudson River! This pedestrian bridge used to be the Poughkeepsie-Highland Railroad bridge and was built in the late 19th century to link NY and New England to the rest of the nation's railway network. But after a fire in 1974, the bridge was abandoned. Through the efforts of a non-profit organization walled Walkway Over the Hudson, an amazing new state park is now open for all to enjoy. It opened in 2009 and provides access to the Hudson River's landscape for pedestrians, hikers, joggers, bicyclists, and people with disabilities. The bridge deck stands 212 feet above the river's surface and is 1.28 miles long. This amazing place is not actually visible in the photo, but is what gives you access to the view of the Franklin Delano Roosevelt Mid-Hudson Bridge spanning the lower Hudson River Valley not too far north of New York City.

FEATURED PHOTO, All Places on the Atlantic Coast of the USA group, 11/11/14

FEATURED PHOTO, The Road to Self Promotion group, 11/9/14

Gorgeous sky. Congratulations on the sale.

Congratulations on your sale, Joan!

Congratulations! and nice view of the Mid Hudson from the walkway.