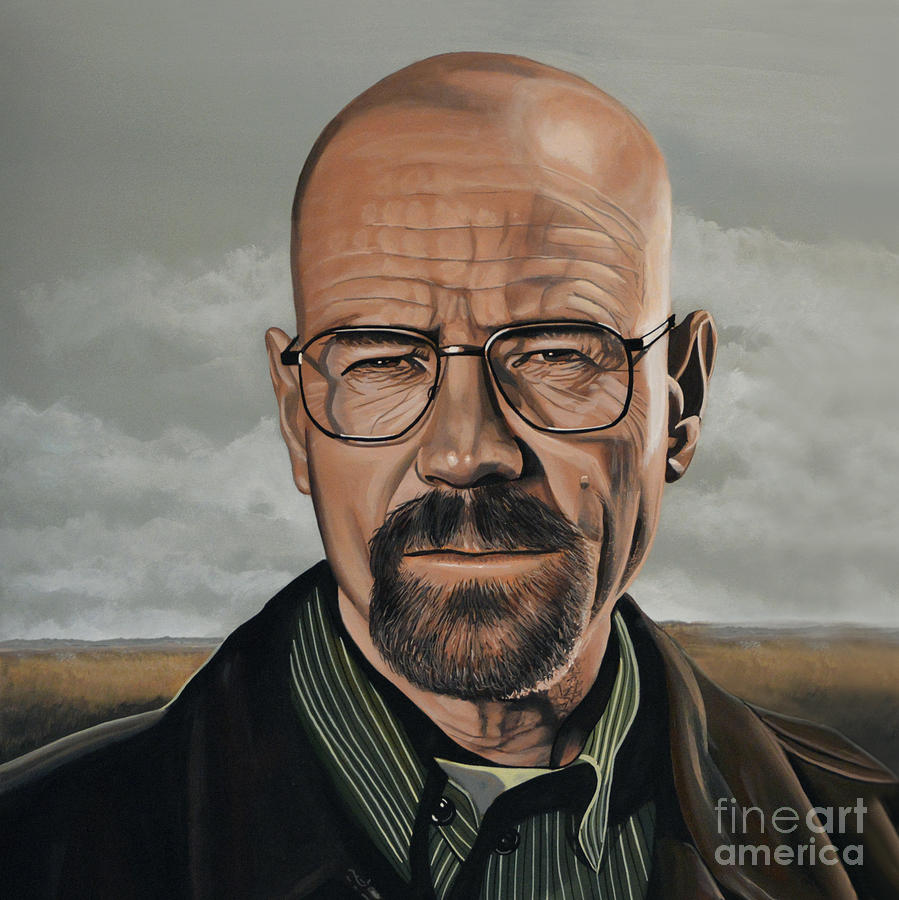 Walter White is a painting by Paul Meijering which was uploaded on January 13th, 2014.

Walter Hartwell White Sr. (also known by his clandestine alias Heisenberg) is a fictional character and the main protagonist of Breaking Bad, portrayed by Bryan Cranston. A graduate of the California Institute of Technology, Walt was once a promising chemist who cofounded the company Gray Matter Technologies with his close friend Elliot Schwartz and his then-girlfriend Gretchen. He left Gray Matter abruptly, selling his shares for $5,000; soon afterward, the company made a fortune, much of it from his research. Walt subsequently moved to Albuquerque, New Mexico, where he became a high school chemistry teacher. The series Breaking Bad begins on Walter's fiftieth birthday, when he is diagnosed with Stage IIIA lung cancer. After this discovery, he resorts to manufacturing methamphetamine and drug dealing to ensure his family's financial security after his death. He is pulled deeper into the illicit drug trade, becoming more and more ruthless as the series progresses, and later adopts the alias "Heisenberg", which becomes recognizable as the kingpin figure in the local drug trade. Series creator Vince Gilligan has described his goal with Walter White as "turning Mr. Chips into Scarface", and deliberately made the character less sympathetic over the course of the series. Walt's evolution from mild-mannered school teacher and family man to ruthless criminal mastermind and murderer is the show's central focus.
Although AMC officials hesitated to cast Cranston due to his previous comedic role on Malcolm in the Middle, Gilligan cast him based on the actor's past performance in the X-Files episode "Drive", which Gilligan wrote. Cranston contributed greatly to the creation of his character, including Walt's back story, physical appearance, and personality traits. Both the Walter White character and Bryan Cranston's performance have received critical acclaim. Cranston won four Primetime Emmy Awards for Outstanding Lead Actor in a Drama Series, three of them being consecutive, becoming the second actor to do so since Bill Cosby for I Spy in the 1960s. Following his fourth win, Cranston tied Dennis Franz for the most wins in the category's history. He is the first man to win a Critics' Choice, Golden Globe, Primetime Emmy, SAG, and TCA Award for his performance.

In the Spanish-language remake Metástasis, his character is renamed Walter Blanco (blanco being the Spanish translation of white) and is portrayed by Diego Trujillo.

Congratulations, your art work is featured on the homepage of "PICTURES FOR PRESENT" group!

Congratulation on sale announcement and beautiful.

Thank you so very much, Yolante! Means a lot coming from you: one of the best!!;-)

It feel a little bit like mona lisa : at any angle walter is watching you... really interesting work !

Wow.., thank you very much, Vincent!

Thank you so much, Rebecca for your compliments and the feature!!;-))...