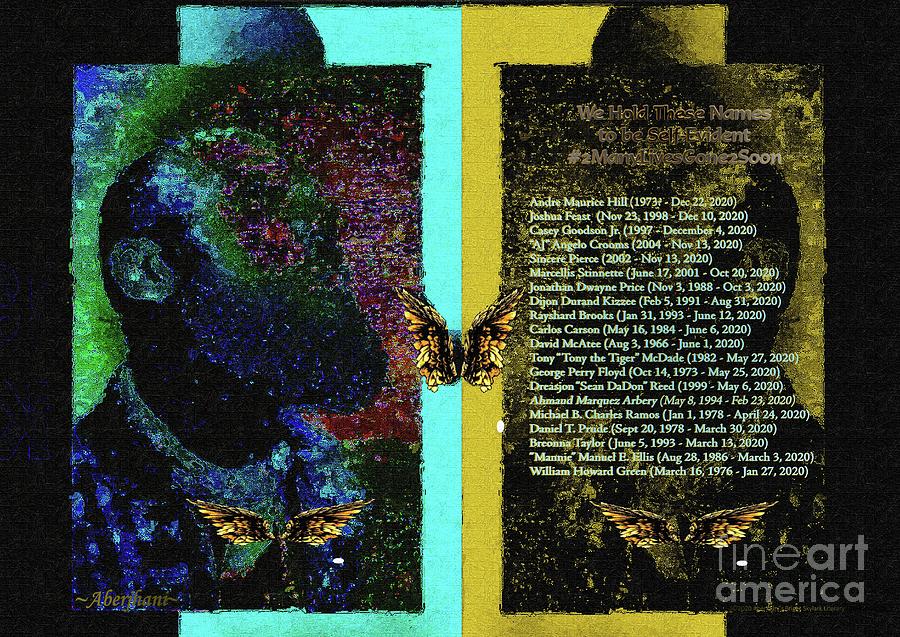 We Hold These Names to be Self-Evident is a mixed media by Aberjhani which was uploaded on December 26th, 2020.

We Hold These Names to be Self-Evident

The epidemic of unarmed African Americans getting shot or killed in other ways by policemen is not something America is proud of and many police... more

We Hold These Names to be Self-Evident

The epidemic of unarmed African Americans getting shot or killed in other ways by policemen is not something America is proud of and many police departments around the country have started implementing reforms to correct the issue. However, for the people listed on this artwork, “We Hold These Names to be Self-Evident,” the changes are obviously coming too late.

“We Hold These Names to be Self-Evident” is a mixed media fine art painting composed of colored text, digital photography, portraiture, and spiritual surrealism. The central images of violent assaults and listed names are underscored by golden wings symbolizing release from physical-world concerns. Just as I was completing this art-piece by adding what I thought would be the last name to go on it, word came that unarmed 47-year-old Andre Maurice Hill of Columbus, Ohio, had been shot dead by police while in a friend’s garage and holding a cell phone. It was the second such questionable shooting in the city in December following that of 23-year-old Casey Goodson Jr. a couple weeks earlier. After receiving multiple confirmations of details surrounding Hill’s murder, I squeezed in his name at the top of the list. The names overall have been compiled from public sources like the Washington Post Police Shootings Database, but many of the birthdates were culled from research published as part of a memorial created by Dr. Renée Ater.

Since the year 2017, at least 867 African Americans have been killed as a result of faulty violent police responses to calls for different situations. A few have made headlines while most have not. What I refer to as ‘faulty responses’ have included: forced overdoses of the drug ketamine (most notably in the case of Elijah McClain), physical application of chokeholds (George Floyd) , violent beatings (Sandra Bland), and gunshots (Breonna Taylor and Ahmaud Arbery).

I do believe humanity one day will evolve beyond the kind of racial biases which have resulted in so much overwhelming pain and grief. But 2020 has not been that year. Police from different demographic backgrounds themselves have lost at least 44 men and women to gun violence while responding to calls for assistance. Some fatalities among their ranks are almost inevitable given the nature of the job just as any number of deaths among military personnel can be expected while training prior to battle. The case of fatalities among African-Americans at the hands of police has drawn international attention because in so many cases it was not inevitable. Yet it has been repeatedly documented that African-Americans (most frequently males) are 3 times more likely to be shot to death by policemen than members of any other demographic group.

A list that did not have to be and all in 2020! If the good police of this country could help weed out the racists and bad ones of their number, it would be a step in the right direction. It is possible but it takes backbone and commitment.

Thanks so much for the revisit VIVA Anderson. Maybe the recent nomination of BLM for a Nobel Peace Prize will help reduce the kind of gun violence which ended the lives of those noted with this artwork.

Back, to again be reminded! And to thank you, for this moving, beautiful testimonial........VIVA

I appreciate that Danny, although I wish the situation was very different from what it is.

You are so right!

Thank you very much Anne. Much respect indeed.

It is sad my friend but the good news is the number of people growing in awareness and helping to correct the deadly situation is increasing. There are, I believe, more on the side of justice than on the side of injustice.

Aberjhani, This IS terrible,sad Witnes for those innocents, named, and historically, unnamed. Man’s inhumanity to man has been known well before my early Knowing. Would that your work influences Mankind to find it’s inner grace, about, race!!! Kudos , fav, admired, supportive...VIVA