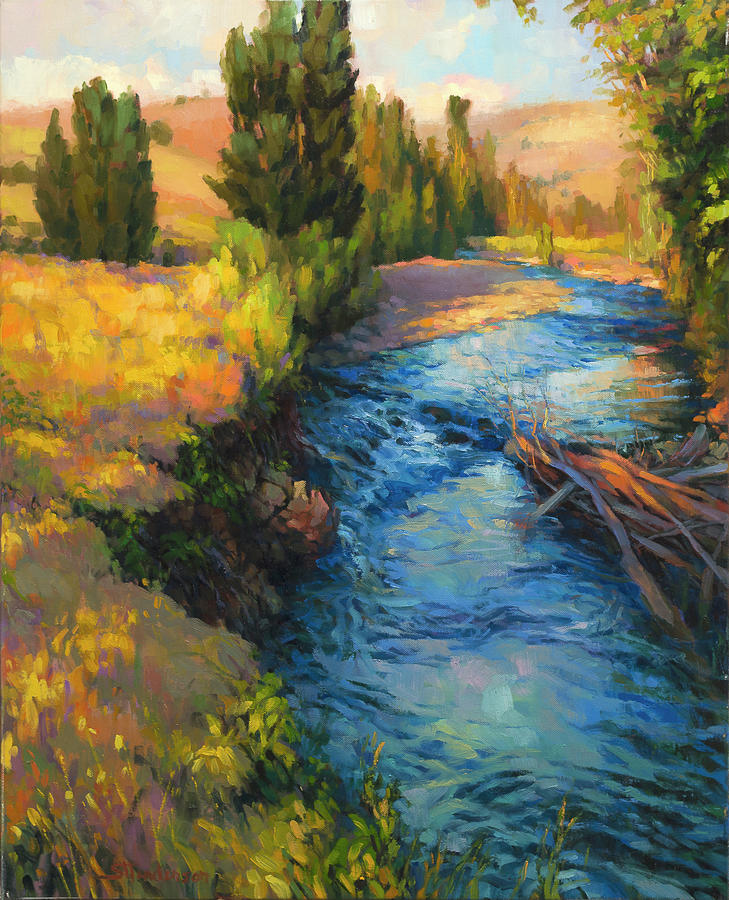 Where the River Bends is a painting by Steve Henderson which was uploaded on August 1st, 2018.

Where the River Bends

Without intervention from human beings, rivers do not stay in the same place.

A large tree falling in the water interrupts the “normal”... more

Where the River Bends

Without intervention from human beings, rivers do not stay in the same place.

A large tree falling in the water interrupts the “normal” flow, and the water, which does not stop, pushes around and against it to continue past. The water that normally passed through the middle of the course now adds itself to the right, say, and this extra flow and movement pushes against an existing bank, breaking parts of it away.

This continues, with more and more of the bank breaking away, until the river has subtly altered its course and shape.

So it is with the North Touchet River in Eastern Washington – in less than 20 years, the river has noticeably changed its course, and at one time, a sagging fence, hanging in mid air, showed that the bank used to be 10 feet closer to the river. But the river has claimed that space.

Where the River Bends, the artwork, invites the viewer to step into the painting and onto the banks of the river, overlooking the spot where the river gently curves and pushes its way past obstacles. Additional obstacles through the years, like more trees and winter ice, have changed that bend into a sharper one, and the river has continued to alter its shape and form.

And the force is “just” water!

It is a sobering yet encouraging thought – that things don’t stay the same, and also, that determined and perseverant action achieves change and results. These two facts are easy to forget in our day to day lives, because sometimes, things seem to change so slowly or not at all, that we wonder if they ever will.

So might the river think, if it had the ability to do so. Everyday, it flows and flows, the water starting from springs and tributaries from above and flowing downward until it eventually, by flowing into more and larger rivers, eventually reaches the ocean.

“Things never change,” the river might think. “I do the same thing everyday, and it always looks the same.”

But look at a photo taken twenty years before, or – if enough weather affected elements have happened to the river – the season before – and the change will be amazing. Rivers, and circumstances, don’t stay the same.

Beautiful artwork Steve and congrats on your sale! f/l/tw/fb

I love this beautiful landscape, the ripples of the water and all the wonderful autumn shades around. l/f/pin/tw

A word of thanks to the buyer from Georgia who purchased a print of Where The River Bends: besides adding beauty to the walls of your home may this artwork instill in your heart and soul a sense of wonder and mystery and serenity found in the natural world around us. Enjoy this view since it is the only one like it: soon after painting this scene flood waters have completely altered this "bend".

Congrats on your nice sale!! Fav

To the buyer from Arizona who purchased a print of Where The River Bends, I wish to extend a word of thanks: On your life's journey may this artwork serve as a reminder to keep things calm and serene -- to take a deep breath, look around you and ponder the wonder of it all. Enjoy the view!

Stunning colors and composition. Congratulations on your sale!