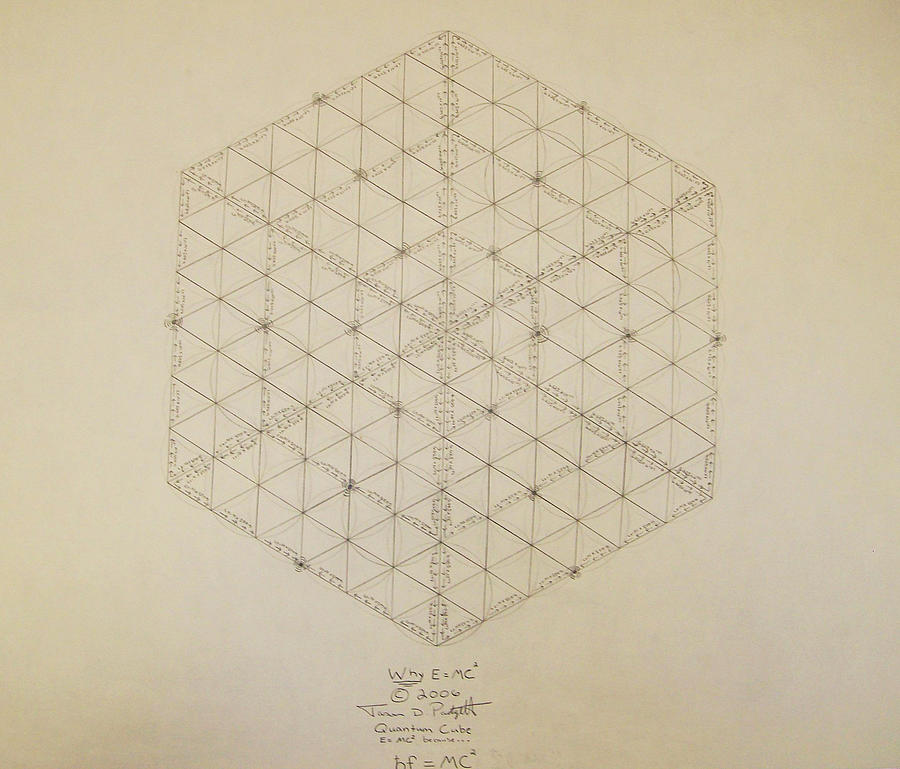 Why E equals MC2 is a drawing by Jason Padgett which was uploaded on June 28th, 2008.

This diagram shows in a simple and elegant way where energy itself may(which also means matter) come from. This shape has been drawn by artists,... more

This diagram shows in a simple and elegant way where energy itself may(which also means matter) come from. This shape has been drawn by artists, mathematicans, physicists and others for thousands of years. Some call it sacred geometry, some call it by scientific terms such as grid or lattice. I call it a Planck lattice or .....the strucutre of space time.

This explanation is a little long but the reward is immense if you are interested in knowing where energy (which means matter, which also means you) comes from.

This requirement automatically creates the grid like structure of space time. This diagram is the ONLY way that space time can be drawn with whole multiples of Planck lengths. Because there are no fractions the shape that arises is a two dimensional hexagon interacting with other hexagons creating larger and larger hexagons. If you view it three dimensionally you will see that it automatically creates three dimensional cubes that create larger and larger cubes. This is 'why', as Einstein stated, that space time has a grid like structure. This is where that grid structure arises from.

Now that we have defined the structure of space time lets look closely at what happens when we 'vibrate' this grid (or Planck lattice) structure.

In reality there are trillions and trillions of collisions occuring at different frequencies which gives rise to all colors, EM waves, gravity, etc. In the diagram I've just drawn collisions at the most common points so it is easier to picture.

The equation at the bottome of the diagram describes energy in pure equation form. Maxwell Planck (who discovered and named the Planck constant), won the noble prize in physics and discovered that Energy=hf. In words, energy equals the Planck constant (the 'h' symbol) times frequency (the 'f' symbol). Einstein discovered that Energy=mc^2. In words, energy equals mass times the speed of light squared. Since Energy=hf and Energy=mc^2, then the both equal energy and therefore equal each other. Or, hf=mc^2, in words, the Planck constant times frequency equals mass times the speed of light squared. Combining these two equations and seeing the shape of space time vibrating at the speed of light is the key to understanding where energy comes from.

On a final note, notice how the structure of space time is a fractal. (A shape that when taken apart into pieces is the same as the whole).

Scientists have know for several years that every shape that exists is a fractal. But they didn't know why. This diagram shows why. Since the structure of space time literally creates all shapes, and space time is itself a fractal, then all shapes that it creates (which is everything) is also a fractal.

I hope you enjoy this and I apologize for the length but it is the shortest way to accurately describe the equation/concept in my limited way.

Fantastic work ! @Cdric Raimbault I dont follow, really, most of his painting, and espcially this is drawn in 3 dimensions.

Hello, I found your drawing fascinating, but I was wondering, the things you see are not 2D but in 3D when I'm wrong? Could you try to add a third D? However, your work is great, you do advance science.

congrats on your sale ...jason

Congrats on your sale !

Congratulations on the sale!!!

Jason. Your story appeared in Dubai today and was intrigued and thought of checking out. The drawing and your explanations are simple yet profound...... It's a pity my teachers didn't knock my head hard enough all those years back..congratulations!!!!

Congratulations on your sale Jason!!

Wonderful work! Congrats on your sale!

Congrats on your sale! :)

By integrating art and science you are blending both sides of the brain. Very cool!

I just read your description, very enlightening. The drawing is so simple at first glance, yet so profound. I'm curious how this lattice relates to string theory (I admit I don't know much about it).