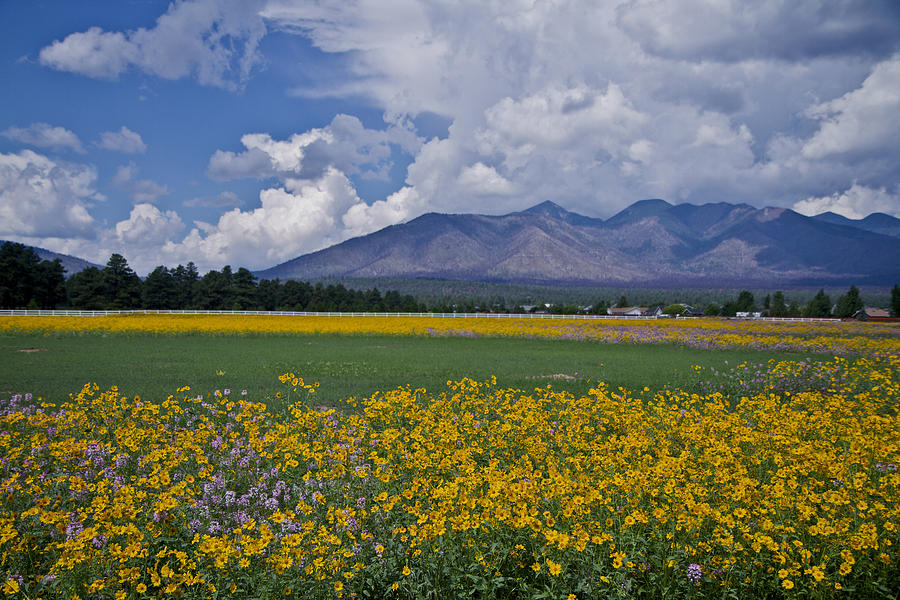 Wildflowers in Flag 9611 is a photograph by Tom Kelly which was uploaded on January 7th, 2013.

Flagstaff is a fun place to visit. It is only 45 minutes up the canyon from Sedona in Coconino County, its weather and climate are very different... more

Flagstaff is a fun place to visit. It is only 45 minutes up the canyon from Sedona in Coconino County, its weather and climate are very different than red rock country. Its elevation is 7000 feet, even though it has many ecosystems within a short drive from it. The city, which is named after a pine flagpole that was used to help celebrate the United States centennial on July 4, 1876. Flagstaff is next to Mount Elden, and south of the San Francisco Peaks; which is the highest mountain range in Arizona. Flagstaff is wonderful in all 4 seasons, although fall is my favorite. When the colors change in Flagstaff, especially around Snow Bowl or the San Francisco peaks, you are in for beauty! As the Aspens shimmer in the wind, and yellow is in the air. The city is also home to Lowell Observatory, with its’ great nighttime skies. In fact, Pluto was discovered using one of the telescopes at Lowell Observatory, and Pluto’s satellite was discovered using the United States Naval Observatory Flagstaff station. Flagstaff has a youthful feel, with many active residents and students, as NAU, a major 4 year University is there. The outdoors call you in Flagstaff, as there are many outdoor hiking, running, and biking trails. In addition, there is great skiing in winter at Snow bowl among the Aspens if you like downhill, and numerous spots for cross country as well. Flagstaff is real popular with tourists as well being very close to the Grand Canyon, Oak Creek Canyon, Meteor Crater, The Painted Desert, and Petrified Forest and historic Route 66. We had plenty of rain last year which resulted in a beautiful bounty of wildflowers that were breathtaking. This area is just outside of Flagstaff proper on the way to the Grand Canyon.

I had no idea that Flagstaff was so lovely - seems like it was just really hot the last time I came through... this photograph is the bomb!!!

Yes, It can get Hot in summer, but Flowers are throughout the area, and Fall totally rocks in Flag Rose Elaine!!

Beautiful shot of the San Francisco Peaks, Tom. So much depth here with the distant white rail fence. Every element of this is gorgeous! FAV / Like

Thanks Jerry; I greatly appreciate your thoughtfulness!

Just wanted to say thanks to the unknown person who bought this in canvas today!! Sincerely, Tom

Thanks for your compliment Lee!!

What a spectacular day in Flagstaff it was, Thanks Anna!

spectacular, soothing and uplifting - a very inviting setting (8) (in facebook terms, the number 8 in parentheses becomes a 'thumbs up') Haniel