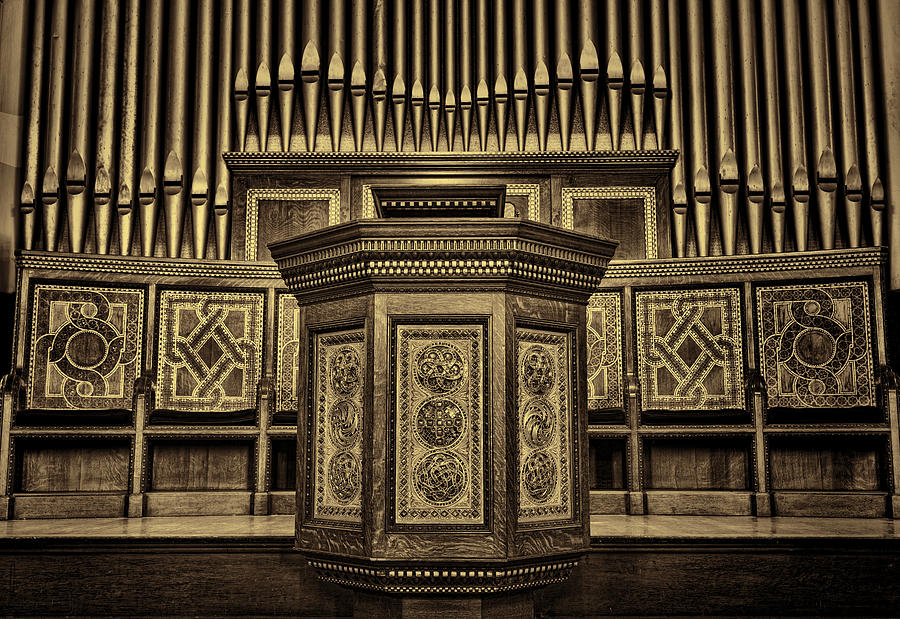 Willard Memorial Chapel Pulpit and Organ #2 is a photograph by Stephen Stookey which was uploaded on November 18th, 2015.

Willard Memorial Chapel stands today as the only complete Tiffany installation at its original location. Built from 1892 to 1894 as the chapel and... more

Willard Memorial Chapel stands today as the only complete Tiffany installation at its original location. Built from 1892 to 1894 as the chapel and classroom for Auburn Theological Seminary, Willard Memorial Chapel contains an exquisite array of Tiffany glass, lights, and architectural detail designed and installed by Louis Comfort Tiffany. The ornate pulpit, inset with Moorish style designs and brilliant green Tiffany glass, was used by students practicing their oratory skills. Attending faculty occupied the seats behind the pulpit and offered critique of student sermons. The organ and pipes, directly behind the pulpit, is one of the finest instruments produced by Steere and Turner Organ Company of Massachusetts--likely constructed in 1894.

Auburn Theological Seminary relocated to New York City's Union Theological Seminary in the 1939, with a continued emphasis upon Christian social justice developed amidst the progressive impulses of mid-19th century Auburn, NY. Following the departure f the seminary, the chapel fell into disrepair, passing through several owners before community leaders in 1989 rallied support to save the chapel and its Tiffany treasures intact. Willard Memorial Chapel is a registered National Historical Landmark (2005) and listed on the National Register of Historic Places.