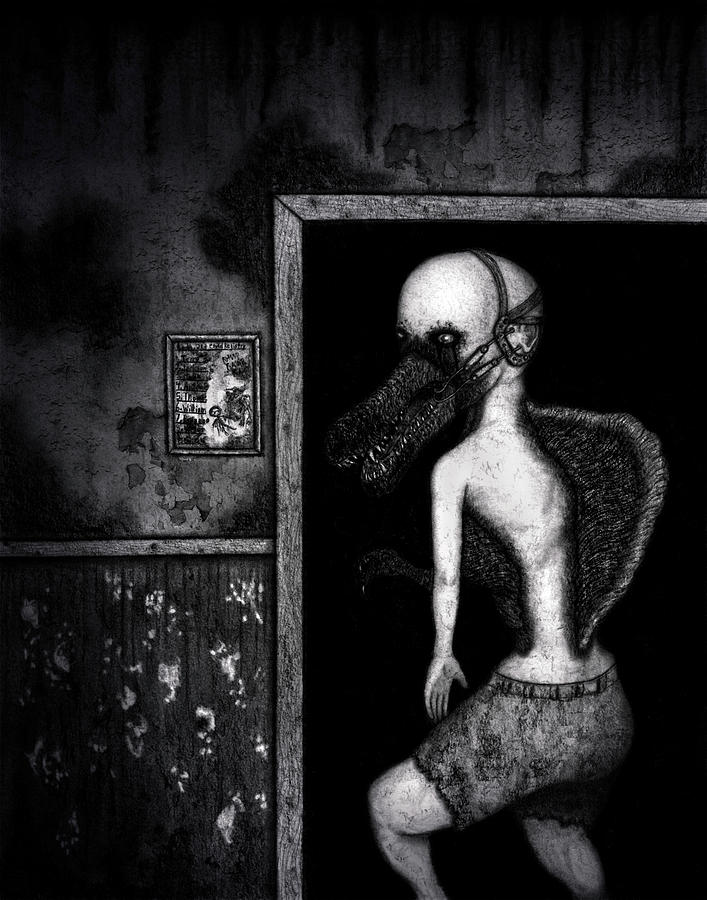 William The Flesheater - Artwork is a drawing by Ryan Nieves which was uploaded on January 20th, 2018.

William The Flesheater - The 2014 artwork featured for the original Blackhaven encounter story #10... more

In one of the towering corporate buildings in the business district of Dracove city Derek works another late night. Derek Halton has a top position dealing with the management of finances and planning within the Mckissen Group a known and very large oil company that performs its main corporation operations in the business district of Dracove city. This position comes with long hours and a lot of stress which has put a strain on his family life. Ever since the promotion into this position he has strayed further away from his family. His primary focus has become his job,often leaving his wife and the kids behind at home for long periods of time, even when he does gets breaks he unable to spend much time with him as he is usually resting or preoccupied with something else. Derek used to be alot closer to his family in the past but this new stress, the long hours,and ultimately the pursuit of money has now turned him cold causing tension in the household. Tonight Derek is as usual swamped with work, calling his wife he tells her its going to be another late night. As she begins to try and argue with him he hangs up lacking the patience to deal with her returning to his work. Derek sighs as he takes a sip of his coffee and zones back into his work. Time passes as Derek feels awake and focused getting through most of the work at an alarming rate due to the numerous cups of coffee. Nearing the end of his work Derek begins to suddenly crash from his coffee high, he starts to lose focus. Reaching for his coffee think more will do the trick he misses his first grab. Then Derek is distracted as he hears racket coming from the opposite end of the office. It sounds like a child grunting “grrrrr...rawr...rawr...rawr...” This causes Derek to jump up as he thought he was alone, he calls out in anger “Somebody better not be playing any childish games, I do not have the time for this!!!”. After a good amount of time passes in silence Derek scratches his head in confusion and returns to his work. The racket stops and Derek begins to check the entire office finding no source. Stumbling around he struggles to move around the office even knocking some things over off of desks in the process. In his last moments before fading completely out of consciousness he hears the racket from before, it has become deep,warped, and vicious sounding...As Derek's vision turns to darkness.

Derek wakes up coughing and gagging on a stagnant unpleasant air. Finding himself seated on a chair in a very dim and dank lobby. He stands up noticing his white dress shirt is coated in soot and filth. He thinks to himself “Shit I must of fell asleep at my desk... where am I”. Derek has never seen such a place, looking around at the filthy dark stained walls, charred flooring, and ruined furniture of the lobby. Derek begins to walk towards a large slightly opened door, a sign above it faintly reads “Orphan Wing”. Derek walks through these doors, with a howling noise they slam shut behind him. Derek is startled, sweat stains appear on the pits of his dress shirt as he slowly walks the through a cavern-like corridor, inside of the alternate Blackhaven Institution. The ambiance is severely unsettling as deep and creaking noises are heard from all around at random. The corridor seems completely abandoned but there is an ever present sense disturbing Derek, an unnerving feeling that he is not alone. Derek hesitates in front of a door room 111, he starts to feel a dreadful feeling becoming nervous. Derek starts to notices a black stain forming on the door. The outlines of small faces to start to protrude from it with trembling lips and socket-less eyes. The mere sight of this causes Derek to scream and panic and he runs away and come across the end of the corridor into to a staircase. Dashing up one flight of stairs he pushes the large doors onto the second floor. Tumbling through the door and crashing onto the nearest wall. Sitting on the floor Derek tries to catch his breath rubbing his face and eyes, now realizing the stress of overworking has been getting to him. Regaining some composure Derek starts to slowly walk down the second floor corridor mumbling broken words to himself. Still somehow stressing about the work he needs to finish even in his current situation. As he begins to walk by room 213, hands come from behind Derek pulling him into the room.

The mysterious figure in a low shaky voice whispers “Shsssh...Shssssh...” into Derek's ear, as Derek struggles. The voice whispers “Please do not struggle I am human like you, please please don't make any noise, you will bring it back...” Derek struggles out of the figures grip to notice a distraught looking man in his mid twenties. Panicked and angry Derek wrestles the man to the ground and struggles with him for awhile shouting at him, “Who the hell are you!!! What is hell is this place!!!”. The man cries and pleads for Derek to stop, suddenly they both stop hearing heavy footsteps coming from right outside the room in the dark hallway. The man sobbing with a terrible distressed expression on his face, mumbles “I..I..Ca..can't do..do..thi...this....an...anymore”. Derek worried of what is to come leaves the man and hides inside an open closet in the back of the room. The door of the closet has a few holes in the wood, one just big enough to peek outside into the room. The distraught man is on his knees swaying side to side in the middle of the room crying, the door open and something enters... Derek's eyes widen and he begins to shiver at the unfathomable and fear inducing sight now before him. A monster appears before the weeping man, he angrily shouts at the monster “I CAN'T DO THIS ANYMORE!!!!”. The monster emits a bone chilling roar which echoes through the room, terrifying Derek to the core. This roar unlike a typical one seemingly starts out as the voice of a young boy quickly distorting and deepening into that of something forceful ,viscous, and monstrous. The monster opens its jaws and begins eating the man, the sounds of flesh being ripped and bones being crunched, the mans final and painful cries, the scent of blood nauseate Derek as he struggles to keep it together. Derek is uncontrollably shaky and his breaths rapid, he tries to lose his eye, he trys to wake up but only opens them back up to the the monster continuing to feed on the man's flesh. After a grisly and nerve wracking couple of minutes, the monster looks up from the corpse and stares in the direction of the closet, Derek's heart skips a beat.

Suddenly Derek vision warps and he begins to experience a brief episode. The grainy vision starts off with the scene of a young boy biting in the arm of a grown man. The scene then instantly cuts to the boy running around a courtyard with a friend, chasing a small group of children both joyfully pretending to be a dinosaur. The young boy's friend soon stops and notices a group of older children are laughing at him and begins to tear upon, the young boy notices this with an angry expression on his face. In the last scene before the vision ends, the young boy bites into the arm of one of the older children. After the vision in all lasting only a few seconds, Derek snaps out of it seeing that the monster is still there but with its back turned to him. The monster heads towards the door looking to exit the room. Derek breaths a sigh of relief as the monster appears to be leaving. Something triggers the voicemails on Derek's phone to play. They begin with “Daddy when will you be home we miss you”, then “Daddy I hope you will be able to make it to my big game tomorrow”, followed by “Daddy where are you...”. Derek tries desperately to silence his phone but the buttons are dysfunctional and do not respond. The monster turns around as its eye is focused on the closet in the back of the room. The monster begins to approach the closet emitting a deep snarl. Derek panics, trying to find a way to break the phone in the cramped space of the closet. The last message plays, “Daddy we still love you...We just want you to come home...”. Then the monster rips open the closet door and ravages inside, screams of pain are heard from Derek, blood spews and splatters from the closet. Soon all that can be heard is the sound of chewing flesh and the crunching of bones. The demon lifts his head from Derek's violated corpse and releases a bellowing roar echoing through the decrepit corridors of the Orphan Wing... Derel's soul soon sinking into the depths of the Alternate Blackhaven Institution...

Find Originals, Prints, and Ebooks on my website at www.theartofpyramiddhead.com