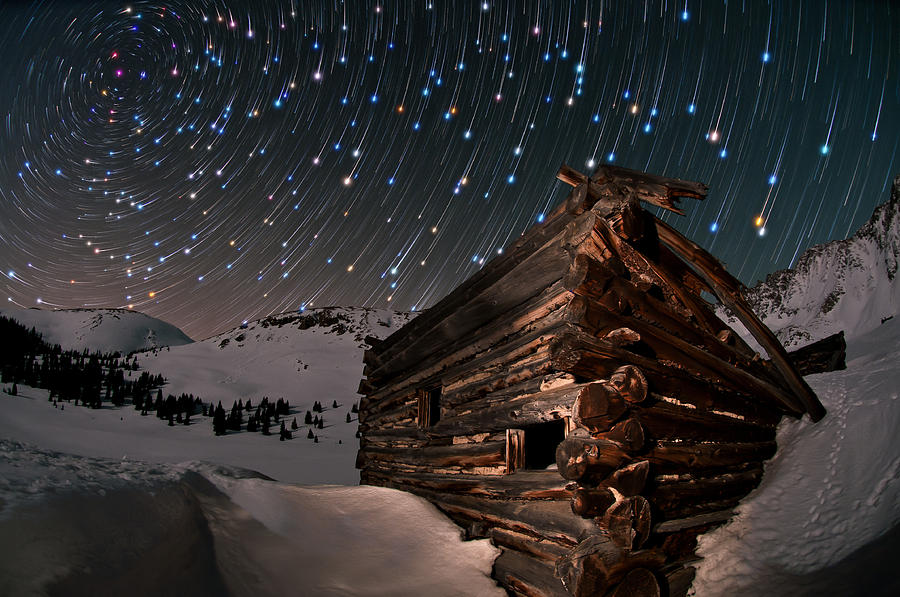 Wonders Of The Night is a photograph by Mike Berenson which was uploaded on January 24th, 2013.

Wonders Of The Night

Stars rotate around the North Star in this high mountain long-exposure capture featuring cabin ruins from the old mining days. This image was taken... more

Wonders Of The Night

Stars rotate around the North Star in this high mountain long-exposure capture featuring cabin ruins from the old mining days. This image was taken after a night-time snowshoe trek up Mayflower Gulch near Copper Mountain, Colorado with some additional post-processing work to create the comet-like star trails.

With optimal moonlight beckoning for me to get out on a Saturday night, I made some plans (with my gear) for a quick return to a familiar spot called Mayflower Gulch. There are some rugged peaks and remains of an old ghost town not so "originally" named Boston just above timberline that I'd been thinking about using for another star trail stacking effort. My plan called for snowshoeing on May 7th (yea, still lots of snow at 12,000 feet) with illumination coming from a thin moon (waxing crescent at 19% full) hanging low in the western skies. And with the mountains above Mayflower Gulch facing west, that would be great for catching some light on the rugged terrain and starry skies.

With sunset at 8, I got to the trailhead and started snowshoeing up at about 9. And with 2 miles to go and only a couple hours of moonlight to work with, I knew I couldn't screw around too much. I figured I'd only get one shot at a star trail stacking effort because when the moon went down, my show was over. So after shoeing up to the cabin remains, I decided on a comp, and started my timer with 15 - 3 minute exposures. Then, after seeing the first two exposures were too dark, I stopped it, made one adjustment, started it over, and let 'er rip - for 45 minutes.

When the 15 exposures were done, I'd lost my moonlight on the cabin and would soon lose it on the peaks. So I shot a couple more times just to try light painting the cabin with a flashlight. This was my first effort light painting that I actually liked and I think it's subtle use really helped to balance out the exposure overall. I was pretty happy with my having captured good light on the foreground, peaks, and stars!

Then about a year later, I came across a tutorial from a hiking/photographer buddy of mine - David Kingham. He had posted a tutorial on how to apply some creative post-processing to star trail images. And with our having hiked in this same location one night, we got onto the same subject. The result of that discussion is that I was able to apply the comet-like star trail processing to my images - yielding the result you see here. So as it turns out, one of my most creative, successful images came from (among other things) some collaboration with a fellow photographer. Thank you David!

Congratulations on this lovely Sunday sale!

This is beautiful, congratulations on your sale!

Incredible and spellbinding-love it :)! v/f -Kim

Thank you everyone! Your comments are very much appreciated.