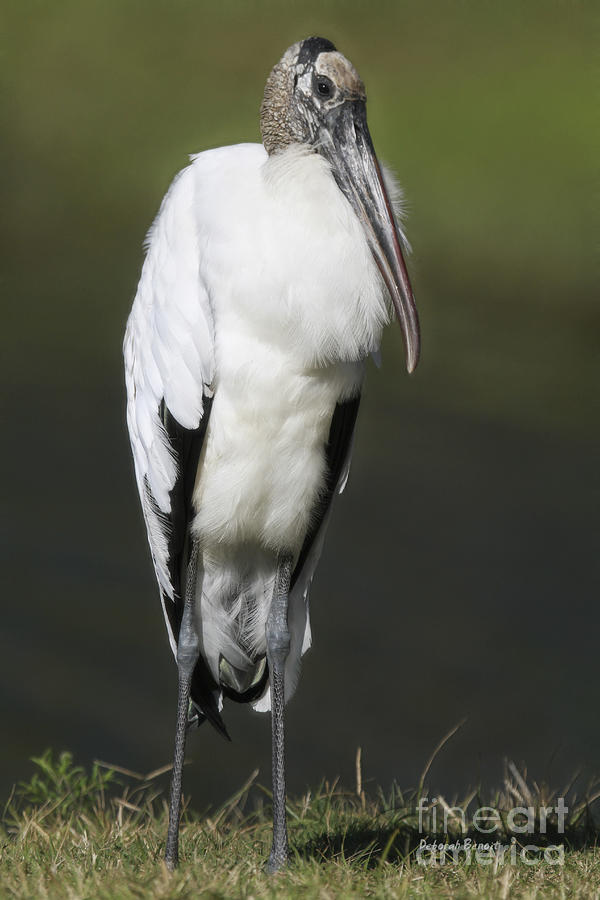 Wood Stork 1112 is a photograph by Deborah Benoit which was uploaded on November 29th, 2012.

The adult is a large bird which stands 83�115 cm (33�45 in) tall and spans 140�180 cm (58�71 in) across the wings. Males typically weigh 2.5�3.3 kg (5.5-7.3 lbs); females weigh 2.0�2.8 kg (4.4-6.2 lbs),although large males can weigh up to 4.5 kg (10 lbs). It appears all white on the ground, with blackish-gray legs and pink feet. In flight, the trailing edge of the wings is black. The head is dark brown with a bald, black face, and the thick downcurved bill is dusky yellow. Juvenile birds are a duller version of the adult, generally browner on the neck, and with a paler bill. The bare head and the long bill, which can measure up to 25.5 cm (10.0 in) in length, render the Wood Stork distinctive from other large waders in its range.The standard scientific measurements of the Wood stork are as follows: the wing is 42�49 cm (17�19 in), the culmen is 19�25 cm (7.5�9.8 in) and the tarsus is 17.5�21.5 cm (6.9�8.5 in).
This is a subtropical and tropical species which breeds in much of South America, Central America and the Caribbean. The Wood Stork is the only stork that presently breeds in North America. In the United States there is a small and endangered breeding population in Florida, Georgia, and South Carolina, along with a recently discovered rookery in southeastern North Carolina. On the other hand, in Santa Catarina state (Brazil), its decline seems to have been reversed: after an absence between the late 1960s and the mid-1990s, the species is now again regularly encountered there, in particular in the Tubar�o River region. It is likely that the Paran� River region's wetlands served as a stronghold of the species, from where it is now re-colonizing some of its former haunts. Globally, it is considered a Species of Least Concern by the IUCN due to its large range.
The Wood Stork is a broad-winged soaring bird that flies with its neck outstretched and legs extended. It forages usually where lowering water levels concentrate fish in open wetlands; it also frequents paddy fields. Walking slowly and steadily in shallow water up to its belly, it seeks prey, which, like that of most of its relatives, consists of fish, frogs and large insects. It catches fish by holding its bill open in the water until a fish is detected.
In the United States, the Wood Stork favors cypress trees in marshes, swamps, or (less often) among mangroves and nearby habitat. The Wood Stork's endangered status resulted in the salvation of the small rural town of Colquitt, Georgia. When the Department of Transportation was planning the construction of Highway 27, they intended to bypass the small community. The plans included a new bridge over Spring Creek and the swampy areas surrounding Colquitt. However, the residence of the Wood Stork in the swampy woodlands of Southwest Georgia required that the DOT use the existing bridge in Colquitt. Had the new bridge been built and the town bypassed, the town's economy would be little of what it is today. Colquitt is the home of Georgia's Folk Life Play, Swamp Gravy, a theatrical production which brings in audience members from across the country. The old movie theater on the town square is currently being renovated to be a conference and concert hall, named The Woodstork Center.
A nesting colony in Georgia, USA
A resident breeder in lowland wetlands with trees, the Wood Stork builds a large stick nest in a forest tree. They nest colonially with up to twenty-five nests in one tree. Breeding once a year, a female lays 3-5 eggs in the typical clutch. The eggs are incubated 27�32 days by both sexes. Wood Storks' reproductive cycle is triggered when waterholes dry up sufficiently to concentrate fish in sufficient numbers for efficient feeding of the chicks. Each chick weighs approximately 2 ounces (60 grams), is unable to fly and is helpless. Competition for food is fierce, and if food is scarce, only the older chicks will survive. Week-old chicks are fed about 15 times per day, and they grow rapidly. By 14 days, each will weigh 10 times its hatching weight. At 28 days, each is 25 times heavier. During the breeding season, Wood Storks need over 400 pounds (180 kg) of fish to feed themselves and their offspring. When the weather is very warm, parents also collect water and bring it to the nest to drool on and into the mouths of the chicks. By the time the young are 4 weeks old, both parents leave the nest to search for food, and this continues until the chicks �fledge� or leave the nest. Young may continue to return to the colony for another 10 to 15 days to roost or to try to get food from their parents. A colony is considered successful if its parents average at least 1.5 fledged young per nest.
Each adult will defend its nest against various predators. Corvids, vultures, grackles and striped skunks will attempt to pick off eggs. Raccoons are the leading predator of nests, and can cause almost complete colony nesting failure when water dries under nests in drought years since they can easily access the nest using dry ground under the tree. Adults have few natural predators, but unwary ones have been picked off by American alligators.

This is just so neat, he looks like a soldier at attention

A beaut of a capture;) v

What a great image! v

Oh my, the wood stork is beautiful! What a stunning catch and capture. f/v

Thank you so very much!!

Oh, wonderful capture! I've not seen one of these! v/f

I vote for this piece!

I add this work to my favorite folder!

Thank you my friend!

Thank you so much :)

Wow what a interesting article Deborah, and love your birds as I said...and this one is beautiful and a biggie..lol.. Sherri:):) hehe I was here before..thats ok..I think it is great!!!