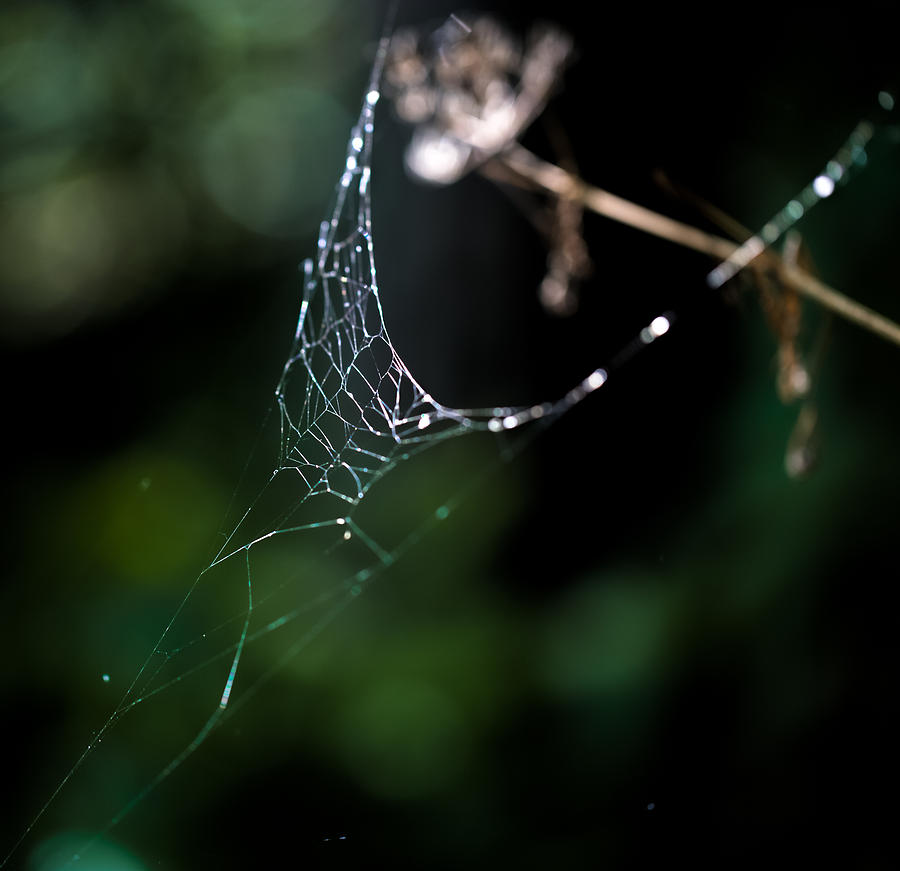 WWW is a photograph by Leif Sohlman which was uploaded on August 29th, 2013.

spiderwebb glittering in sunshine. Canon 5D mk III
Spider webs have existed for at least 100 million years, as witnessed in a rare find of Early Cretaceous amber from Sussex, southern England.[2] Insects can get trapped in spider webs, providing nutrition to the spider; however, not all spiders build webs to catch prey, and some do not build webs at all. "Spider web" is typically used to refer to a web that is apparently still in use (i.e. clean), whereas "cobweb" refers to abandoned (i.e. dusty) webs.[3] However, "cobweb" is used to describe the tangled three-dimensional web [4] of some spiders of the theridiidae family. Whilst this large family is also known as the tangle-web spiders, cobweb spiders and comb-footed spiders, they actually have a huge range of web architectures.
When spiders moved from the water to the land in the Early Devonian period, they started making silk to protect their bodies and their eggs.[3][5] Spiders gradually started using silk for hunting purposes, first as guide lines and signal lines, then as ground or bush webs, and eventually as the aerial webs that are familiar today.[6]

Spiders produce silk from their spinneret glands located at the tip of their abdomen. Each gland produces a thread for a special purpose � for example a trailed safety line, sticky silk for trapping prey or fine silk for wrapping it. Spiders use different gland types to produce different silks, and some spiders are capable of producing up to 8 different silks during their lifetime.[7]

Most spiders have three pairs of spinnerets, each having its own function � there are also spiders with just one pair and others with as many as four pairs.

Webs allow a spider to catch prey without having to expend energy by running it down. Thus it is an efficient method of gathering food. However, constructing the web is in itself an energetically costly process because of the large amount of protein required, in the form of silk. In addition, after a time the silk will lose its stickiness and thus become inefficient at capturing prey. It is common for spiders to eat their own web daily to recoup some of the energy used in spinning. The silk proteins are thus recycled.

The tensile strength of spider silk is greater than the same weight of steel and has much greater elasticity. Its microstructure is under investigation for potential applications in industry, including bullet-proof vests and artificial tendons. Researchers have used genetically modified mammals to produce the proteins needed to make this material.[

There are a few types of spider webs found in the wild, and many spiders are classified by the webs they weave. Different types of spider webs include:
Spiral orb webs, associated primarily with the family Araneidae, as well as Tetragnathidae and Uloboridae[11]
Tangle webs or cobwebs, associated with the family Theridiidae
Funnel webs, with associations divided into primitive and modern
Tubular webs, which run up the bases of trees or along the ground
Sheet webs

Several different types of silk may be used in web construction, including a "sticky" capture silk and "fluffy" capture silk, depending on the type of spider. Webs may be in a vertical plane (most orb webs), a horizontal plane (sheet webs), or at any angle in between. It is hypothesized that these types of aerial webs co-evolved with the evolution of winged insects. As insects are spiders' main prey, it is likely that they would impose strong selectional forces on the foraging behavior of spiders.[3][12] Most commonly found in the sheet-web spider families, some webs will have loose, irregular tangles of silk above them. These tangled obstacle courses serve to disorient and knock down flying insects, making them more vulnerable to being trapped on the web below. They may also help to protect the spider from predators such as birds and wasps

Thank you Marinescu for featuring in group Premium FAA Artists

Thank you James for featuring in group Beauty

Thank you Mariola for featuring in group 500 Views

Nice close up of a spiderweb, beautiful bokeh!

Wonderful silvery look on the web!