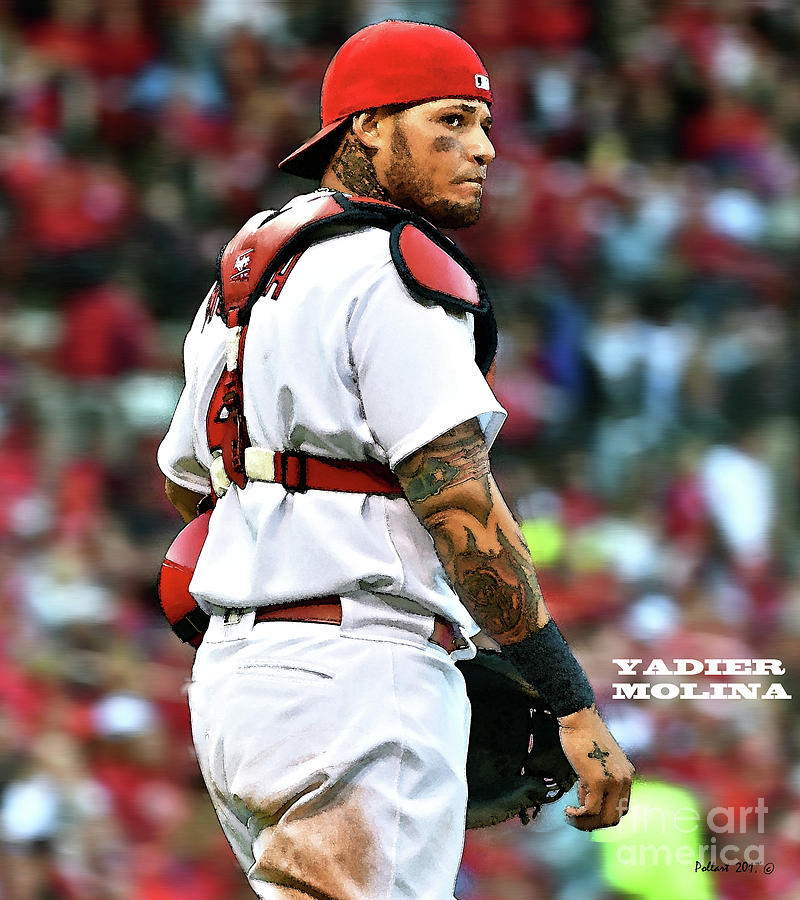 Yadier Molina, St. Louis Cardinals is a mixed media by Thomas Pollart which was uploaded on August 11th, 2017.

Yadier Benjamin Molina (Spanish pronunciation: [ʝaˈdjer moˈlina]; born July 13, 1982), nicknamed "Yadi", is a Puerto Rican professional baseball catcher for the St. Louis Cardinals of Major League Baseball (MLB). He has played his entire MLB career with the St. Louis Cardinals since making his debut in 2004, and made four appearances for the Puerto Rican national team in the World Baseball Classic (WBC). Widely considered one of the greatest defensive catchers of all time, he is a two-time World Series champion and four-time National League pennant winner with the Cardinals, and a two-time silver medalist with Puerto Rico.

Molina ranks second all-time among catchers with 130 Defensive Runs Saved (DRS), and first among active catchers with 845 assists, 41.69% of runners caught stealing, and 55 pickoffs. He also ranks in the top 70 among catchers in history in each of fielding percentage, games played, double plays turned and assists. As a hitter, he has accrued more than 1,500 hits, 100 home runs, and 700 runs batted in (RBI) during his career, while batting over .300 five times. [1] The anchor to the Cardinals' postseason success, Molina's MLB distinctions include eight All Star Game selections, eight Gold Gloves, four Platinum Gloves, and one Silver Slugger Award. Further, he is a two-time selection to the All-WBC Tournament Team.

The product of a baseball family, Molina was born in Bayamon, Puerto Rico. His father was an amateur second baseman and the all-time hits leader in Puerto Rican baseball, and his two older brothers, Bengie and José, also developed into standout defensive catchers with lengthy MLB careers. Long before playing professionally, Molina's pitch-handling and throwing skills caught the attention of scouts. The Cardinals' fourth round selection in the 2000 MLB draft, he quickly showed one of the strongest and most accurate arms in the game after starting play in the major leagues. Having earned a reputation as a team leader throughout his career, Molina formulates fielder positioning plans and complete pitching strategies to opposing hitters.

Initially considered a light hitter, Molina significantly improved his offense and raised his career batting average from .248 in 2007. He has appeared on five Most Valuable Player Award (MVP) ballots, finishing fourth in 2012 and third in 2013. The Cardinals have appeared in the postseason in nine of his first 12 seasons, and he is the only catcher in club history to appear in at least five. In 2006, he became just the third catcher to play in two World Series before age 25, following Johnny Bench and Yogi Berra. He became the all-time Cardinals' leader in games caught with 1,439 on April 8, 2016. Molina is under contract through 2020. He is considered to be a strong future candidate for the Hall of Fame.

Las Vegas, NV, thank you for your purchase today !!

Kansas City, MO, thank you for your purchase today !

Belleville, IL, thank you so much for your purchase today !!

San Antonio, TX, thank you very much for your purchase today !!

Branson, MO, thank you for your purchase !!

Thank you for your purchase Kirbyville, MO !!!