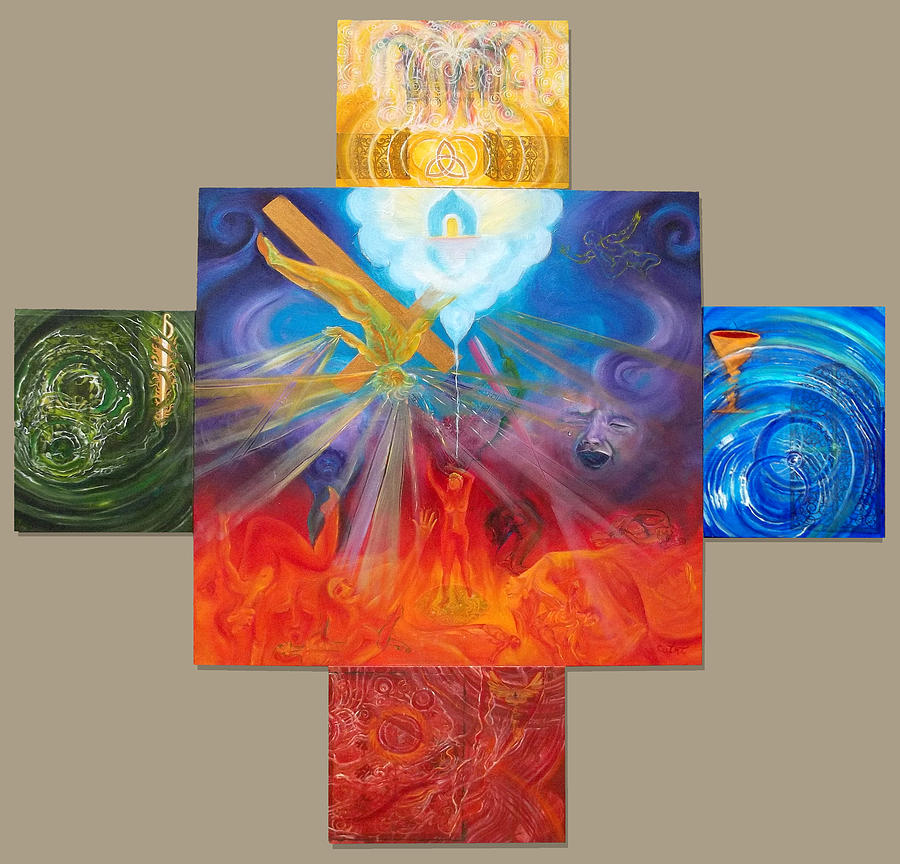 Yahweh El Shaddai is a painting by Anne Cameron Cutri which was uploaded on April 14th, 2010.

Yaweh (YHWH)
YHWH is a "tetragrammation (tetr-"four"and gramma "letter") that appears 6,828 times in a Hebrew Masoretic text. It is traditionally translated into "The Lord". It also translates as the "I AM" in Exodus 3:14 when God said to Moses "I AM THAT I AM". It stems from the Hebrew conception of monthesis that God exists by himself for himself, and is the uncreated Creator who is independent of any concept, force, or entity. "Life" is also connected with name YHWH, presented as the living God as in Jeremiah 10:10.
El Shaddai
In her book "Praying the Names of God" Ann Spangler writes : When Abraham was 99 years old, the Lord appeared to him and said," I am God the Almighty; walk before me and be blameless. I will confirm My covenant between me and you and greatly increase your numbers." (Genesis 17:1-2)
In the Septuagint and other early translations Shaddai was translated with words "Almighty". The root word "shadad" means "to overpower" or "to destroy". Other interpretations and derivations have alternative meanings, one theorist is W.F. Albright. He suggested the Semitic stem that appears in the Akkadian shadu meaning "mountain". An alternative view proposed by Albright is that the name is connected to shadayim which means "breasts" in Hebrew. It may then connected to the notion of God's fertility and blessings of the human race. In several instances it is connected with fruitfulness: "May God Almighty [El Shaddai] bless you and make you fruitful and increase your numbers..."(Gen. 28:3) "By the Almighty [El Shaddai] who will bless you with blessings of heaven above, blessings of the deep that lies beneath, blessings of the breasts [shadayim] and the womb [racham]" (Gen. 49:25)
My interpretation in painting
I liked all of the theorized derivations, particularly that One that is Almighty may also nourish as with breasts. In the above detail Jesus Christ the son of God is representing the Almighty Overpowering One, while His Father is God the Nurturer as the cloud like breast form, sending down sacred nourishment to the figure in the center. This sort of hell-like situation she finds herself in is being lifted out by the "super hero" Jesus. I was told once that it is blasphemous to have a cross upside down and I'm sure some will take offense that he is naked, but he was when he was crucified, too. I assure you I painted this in the utmost reverence. The four paintings on the sides is the cycle we go through to eventually surrender to His help.


This is the panel on the left that represents the being locked out of the Garden of Eden with the flaming sword as the symbol. There is a closed gate behind the swirls of energy that are starting to separate.

This is the bottom panel that is the kind of hell we can get in. The swirls are chaotic. There is a flaming wheel with the symbol of a key to the lock to the right.

In this panel we have found redemption represented by the golden cup. The swirls are becoming more ordered again.


The top panel is the golden heavenly place where all is ordered and balanced and full of abundance.

This is such a powerful group of paintings that collectively speak to the soul!

Thank you Beverly, blessings to you!

Thank you Ronald and Amador, and I will visit your photos!

Congratulations... If you have time, please, visit my photos... Thanks!!!

Carol, Marcia and Odon Thank you!

Congratulation on your sale

Diannah and Will, thanks for your vote, favorites and comments!

Fania and Sonia sorry I'm so late to respond I guess the notice didn't get through my email. Fania yes He has many names and I thought I would try to paint them all and maybe one day I will!

Emmanuel, Yahweh, El-Shaddai, Adonai, Jehovah Rafa...etc ... Either/or He is the God of many names and the God of more than enough... thank you for sharing the love, truth and vision... Blessings to U Anne!

Marsha, thank you so much for your comments! I would like to do paintings on all the names of God!

Anne, I love this.I see many things in it,beautiful colors.You are talented.Many people don't knoe Yahweh is the Personal name of God. God Bless You sweetie.Marsha