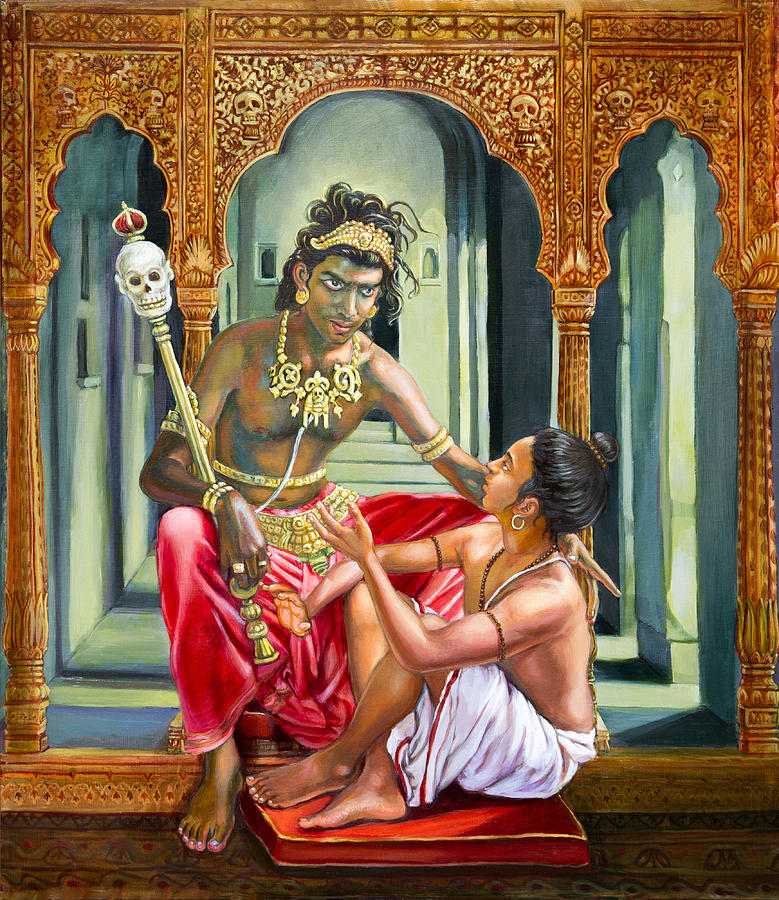 Yamaraja answers the questions of Nachiketa is a painting by Dominique Amendola which was uploaded on August 12th, 2015.

Yamaraja answers the questions of Nachiketa

This is a commissioned painting destined to illustrate the Katha Upanishad. The story goes that Nachiketa, a brahmin boy, went to Yamaraja's abode,... more

Yamaraja answers the questions of Nachiketa

This is a commissioned painting destined to illustrate the Katha Upanishad. The story goes that Nachiketa, a brahmin boy, went to Yamaraja's abode, Death's home, but the god was out, and he waited three days. When Yamaraja returned, he was sorry to see that a Brahmin guest had been waiting so long. He told Nachiketa, "You have waited in my house for three days without hospitality, therefore ask three boons of me". Nachiketa first asked for peace between his father and himself. Next, Nachiketa wished to learn the art of performing fire sacrifice, for his third boon, Nachiketa asked to learn the mystery of what comes after death.
Yama was reluctant to answer this question; he said that this had been a mystery to everyone. He asked Nachiketa to ask for some other boon, and offered many material gains.

But Nachiketa replied that material things will last only till the morrow. He who has encountered Death personally, how can he desire wealth? No other boon would do. Yama was secretly pleased with this disciple, and elaborated on the nature of the true Self, which persists beyond death. The key of self realization is that this Self (within each person) is one and different from the Supreme Lord, the vital force in the universe. Yama's explanation focuses on the following points:

The sound Om is the syllable of the supreme Brahman (Absolute Truth).The Vedanta-sutra says that Brahman is that from which everything emanates. It is that which maintains everything then re-absorbs it all, the ultimate source of all energies. There are many controllers or gods of very specific powers, but the Absolute Truth is one without a second.
The Soul, whose symbol is Om is the same as the omnipresent Brahman. Smaller in quantity but same in quality.
The goal of the wise is to know the nature of the soul and the difference between soul and super soul.
After death, it is the Soul that remains; the soul is immortal.
Mere reading of the scriptures or intellectual learning cannot help realize the soul.
One must discriminate between the soul and the body, which is the seat of desire.
Inability to realize Brahman (Absolute Truth) results in one being enmeshed in the cycle of rebirths. Understanding the Self leads to liberation and freedom from this material world.
Thus having learnt the wisdom of the Brahman from Yama, Nachiketa was freed from the cycle of birth and death.

This image is under strict copyright to Dominique Amendola.

Dominique, this is deep truth. One we spend lifetimes understanding and putting into practice. The intention of one's heart directs our energy outward to others. We are truly all one.

F/L. This is a wonderful story, so many truths in the writing:>). Your painting is superb!

Congratulations on your recent sale. Cheers!

An amazing achievement. Thank you for sharing it.

I enjoyed the description and glad to see it a commissioned piece too, Dominique! Well presented and beautiful work of art! FAV!

Congrats on your sale and your beautiful work!

Congratulation on your sale.

Dominique, Congratulations on your Sale!

Your description is as beautiful as this painting!~ Awesome!! L/F

Congrats on your Elvis Pick of the Week! Amazing details! L&F

Dominique, Congratulations on your ELVIS Pick of the Week Feature in WFS!...L

Congratulations on being chosen for the big Feature, Elvis Pick of the Week, Your artwork was chosen to be FEATURED in this HOT spot on our homepage for this week. A truly lovely piece of artwork for all the world to view and enjoy. Thanks much for sharing! Randy B. Rosenberger Administrator of the Wisconsin Flowers and Scenery group

Thanks Randy for choosing such an usual picture for your group!