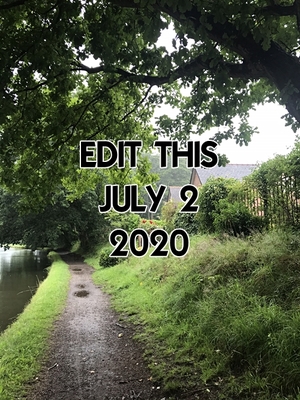 edit this image
Or draw it
Or paint it
Or manipulate it
Whatever takes your fancy but we must see that it is from the original photo.

Enter this contest EDIT THIS 2 2020
Upload your work
Members will vote.
Someone will win

WHAT CAN YOU WIN

A $20 gift certificate towards yours, or someone else's work, here on FAA/Pixels

HOW TO GET THE FULL IMAGE

Only one winner may get the certificate so, in the event of a first place tie, my partner Rob and I will choose one winner from those joint winners Our decision is final.
We must recognise the photo

MAY I SELL THE IMAGE I CREATE

Changed Rule You may enter any contest they like but will not win any more prizes for five contests after their wins, for fairness.

so at present, people who will not get a prize are,

SHARE IN THIS THREAD AND ENTER THE CONTEST LINKED ABOVE

I think something is wrong with the contest. It's already showing all the images from the previous contest which has been completed.

Please check it out.

Here is the early stage for my first entry

The first thing that came to mind was a WEB The spider is next


By the way, someone has already submitted 3 images, I don't think belong

A hiker pauses before taking on the labyrinth of curves. 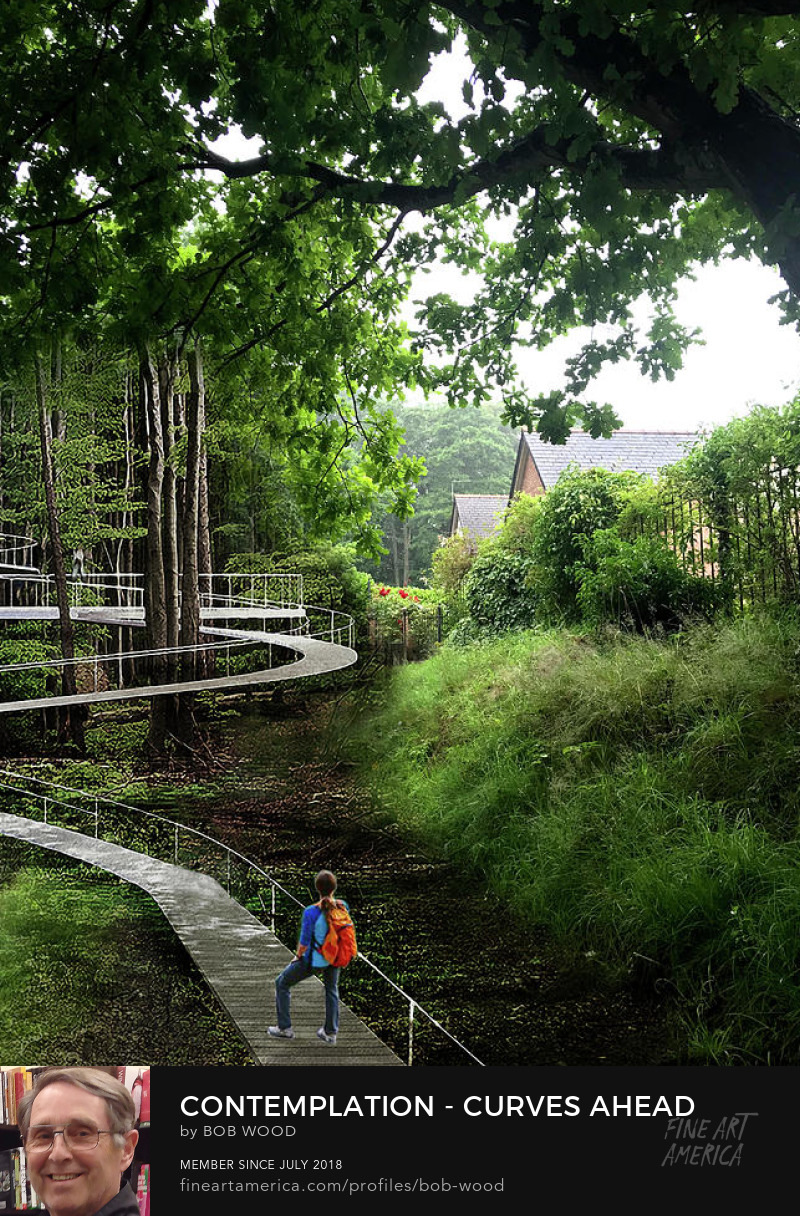 Here is my edit. Thanks Abbie for the lovely walkway for this bloke and his dog. I added a tree in the foreground and also added this guy walking his dog - they notice that the tree on the path has blue butterflies resting on the trunk. The sweet dog notices a butterfly coming after him. 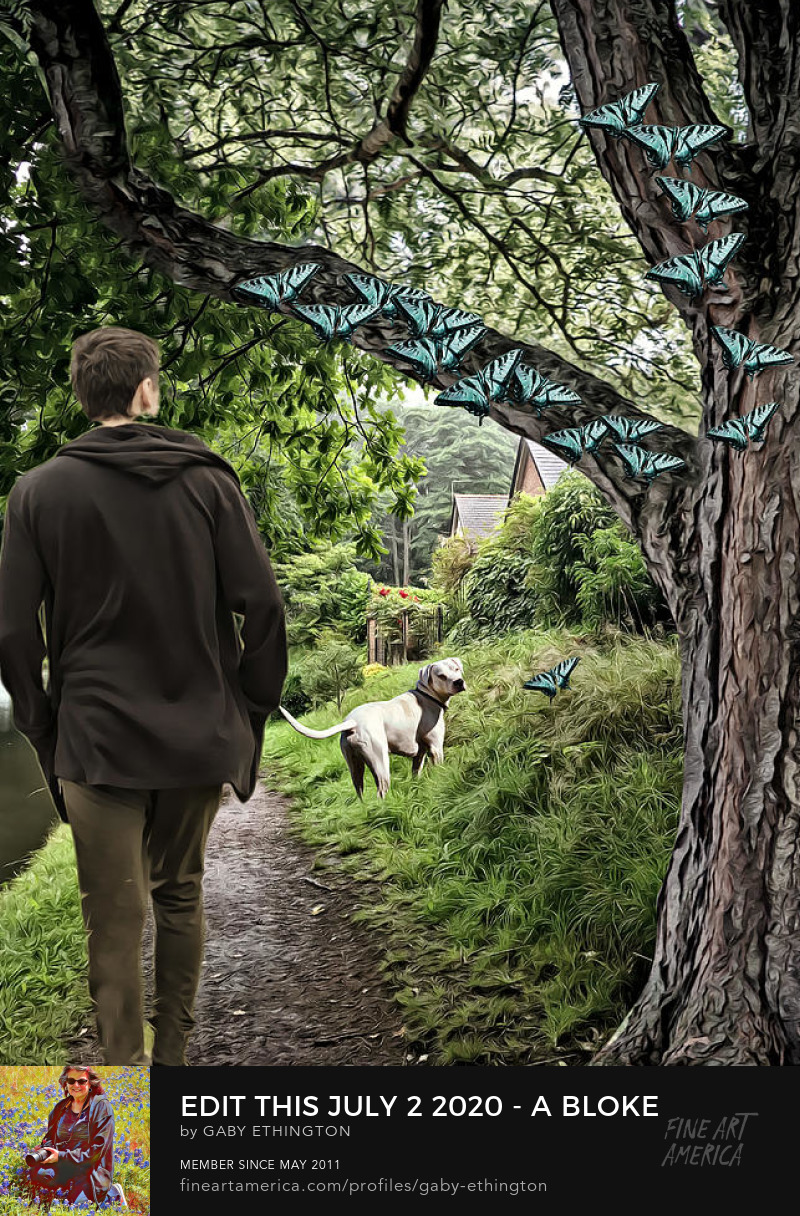 HI Everyone. Here is my entry. The horse and buggy was edited from original image, Mennonite and Carriage, by Alan Walker under Creative Commons Attribution-Share Alike 2.5 Generic license. (https://creativecommons.org/licenses/by-sa/2.5/deed.en) 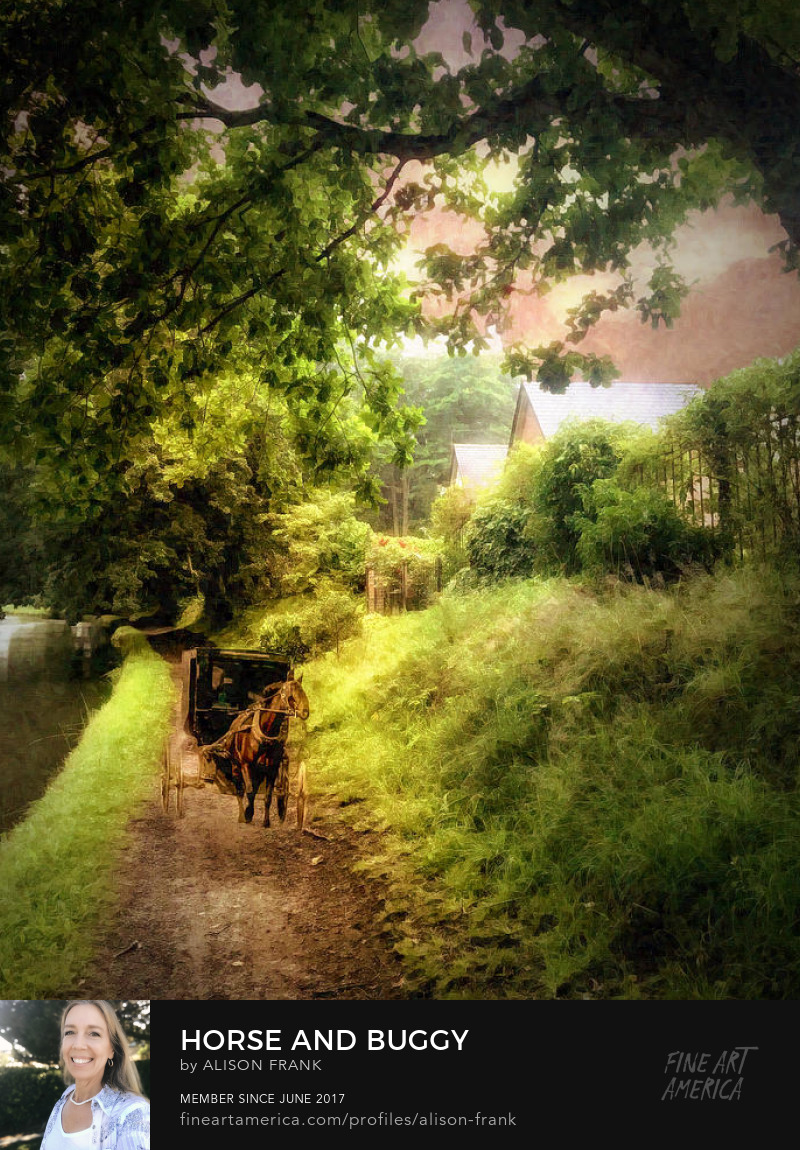 Yes, it appears to be corrected now. 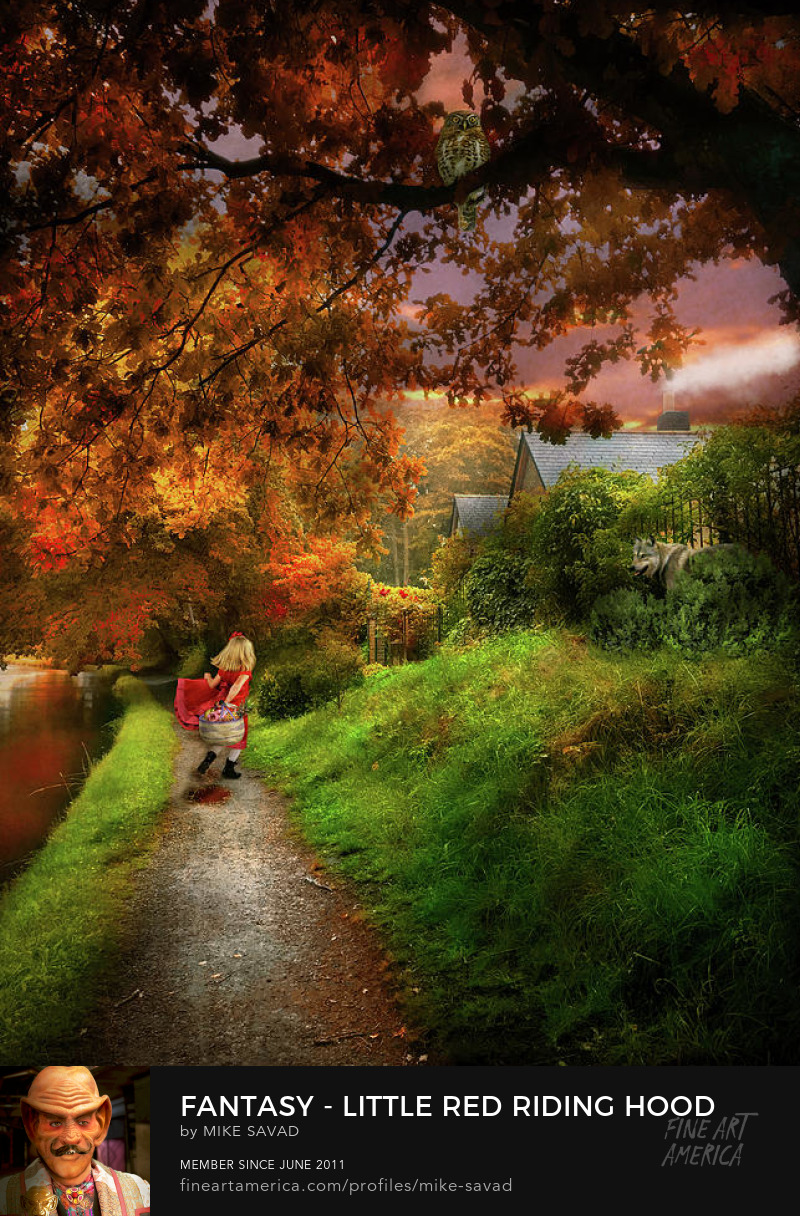 Little Red Riding Hood is about a small naive girl who trusted a wolf enough to tell it where she was going. In this case to visit her grandma's house, to which she explained to the wolf exactly she where she lived.

The wolf kept an eye on her, followed her, and beat her there. Her grandmother, feeble, small and weak in bed, was waiting for the child. Instead the wolf came in and (Spoiler alert), ate the grandmother all up. The wolf being into cross dressing and cos-play, got dressed into the grandmother's clothes.

Pointing out the unusual features in her face, the disguised wolf became depressed, and when it was sad it ate. And he ate the girl. And that is how the story went.

just made it time for bed.

This is my 1st entry into the 2nd July "Edit This Challenge" from Abbie Shores.
I added a new background sky to replace the original blank white one. I widened half of the image from the trail to the left water's edge. I added the equestrian on horseback on the widened trail and tried to match the lighting conditions. I made other normal image adjustments. I added shadows and vignette. I softened the image with some glow. 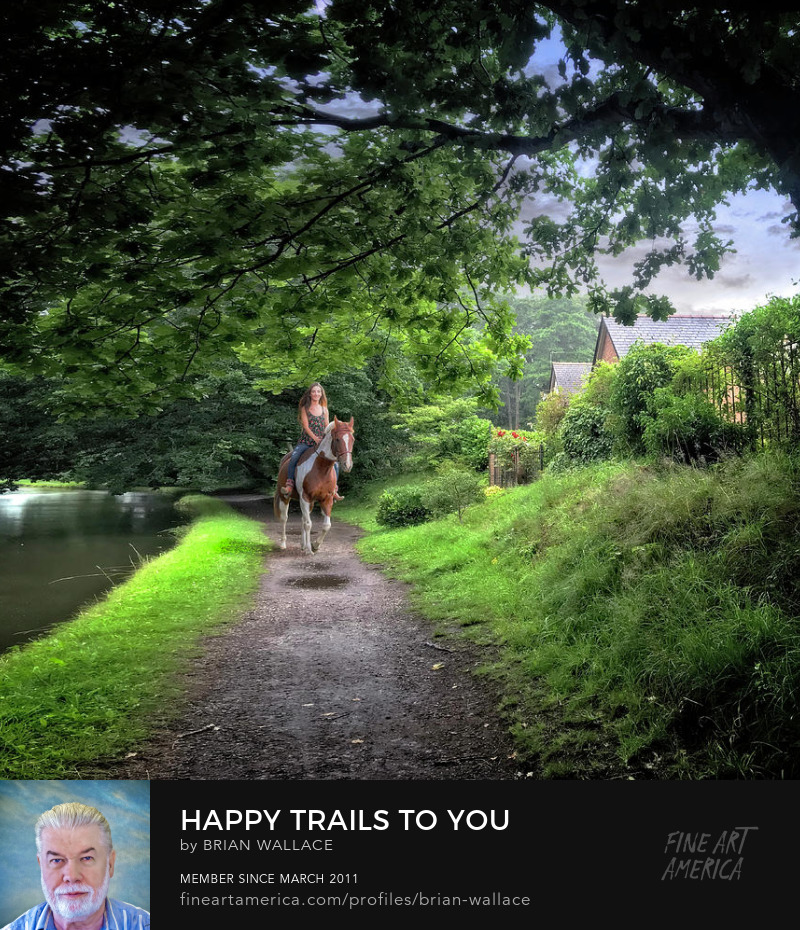 This is my 2nd entry into the 2nd July "Edit This Challenge" from Abbie Shores.
I added a new background sky to replace the original blank white one. I widened half of the image from the trail to the left water's edge. I added the happy lady having fun riding her bike on the widened trail and tried to match the lighting conditions. I made other normal image adjustments. I added shadows and vignette. I softened the image with some glow. 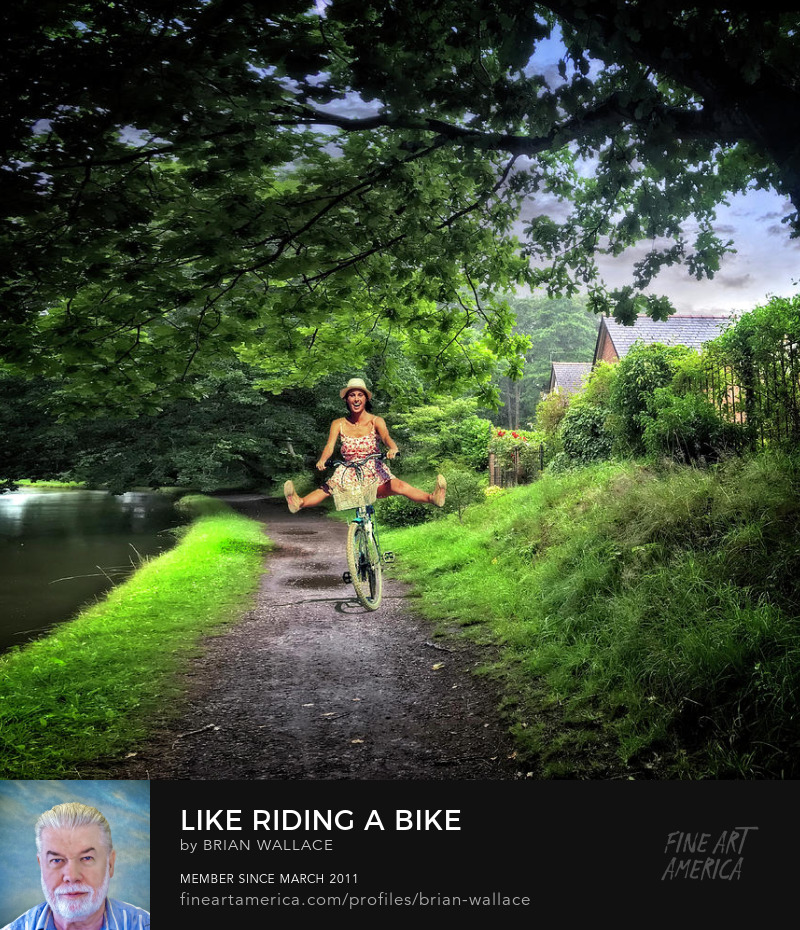 This is my 3rd entry into the 2nd July "Edit This Challenge" from Abbie Shores.
I added a new background sky to replace the original blank white one. I widened half of the image from the trail to the left water's edge. I added two people in a trike pedaling on the widened trail and tried to match the lighting conditions. I made other normal image adjustments. I added shadows, a sepia tint, and light vignette. I softened the image with some glow. Brian, widening the trail was a great idea! Great job on all 3.

Since I do everything on my lap top, using the touch pad, and employing the basic Gimp program.

and completely ignorant of what potential Gimp may have.

I tediously plopped a 75 pixel dark green dot, for every dew drop.

And then using a textured brush stroke a 50 pixel light blue dot was placed on the lower portion of the green dot
'
Then a 35 pixel textured white dot on that blue dot.

It took forever, and is no way consistent...Dots are all over the place, as you can see within the closeup square

I justify the variation as "Giving Life" to the dewdrops, and indicating a "Handmade" quality.

I'm fighting with myself, whether all this time and effort is worth the result. Maybe a colorful spider will save the day

Alison, Thank you for the nice comment. I also must say that I've admired all of your editing work on Abbie's challenges.

@roger - i think there is an easier way to make the dots. if you make a brush, a round one at the size you want. choose a spacing that looks like what you want. then choose the path tool and make a selection, i think it has to be a complete circle. then right click it and choose - Stroke Path - choose the brush you chose it should create a series of circles were you want them.

from there you can use a style, making a solid color and an inner shadow to make them into balls. i use this method to make rivets on metal.

this is for photoshop any version

Thank you Brian! I always have fun with these.

Mike - That was a good lesson! I have learned a lot from you these last 3 years.

Thank you for this challenge, Abbie. My depiction of life on the other blue planet..Neptune. Thanks for showing me the WAY.

I got the Gimp book out and looked up "Stroking Path"

At first it was all a bunch of gobbly gook

But eventually, by trial and error ,I was able to produce a meandering string of beads.

I tried it on the existing created beaded web image, and got carried away.

I've got to restart from scratch, keeping the web sparkling yet transparent

yeah its tricky at first, i don't use it as much as i used to, but its a good way to say - string rope, or chain or something else in a nice neat way. the only hard part is that you have to set the brushes and such up in advance.

if anything it should keep you sane and keep your hand from fatiguing. Stopped working on the web, to come up with this rough idea

A little bit of excitement This is a very popular discussion with 77 responses.   In order to help the page load faster and allow you to quickly read the most recent posts, we're only showing you the oldest 25 posts and the newest 25 posts.   Everything in the middle has been skipped.   Want to read the entire discussion?   No problem: click here. 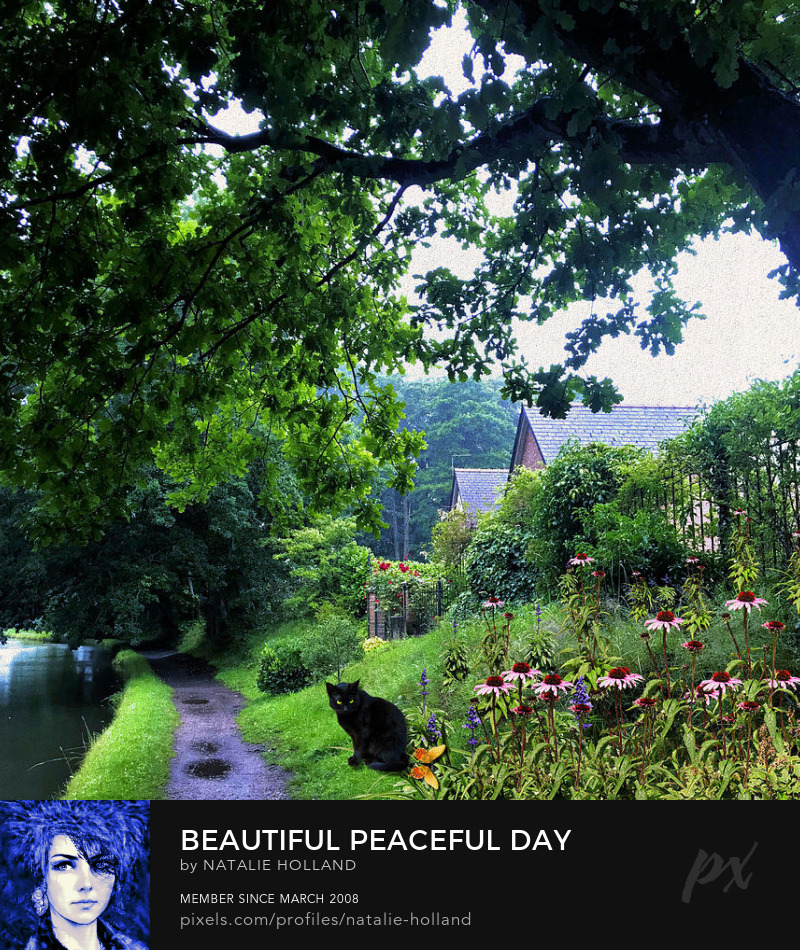 Started from scratch on this one and went for an all natural version. No fences. No houses. 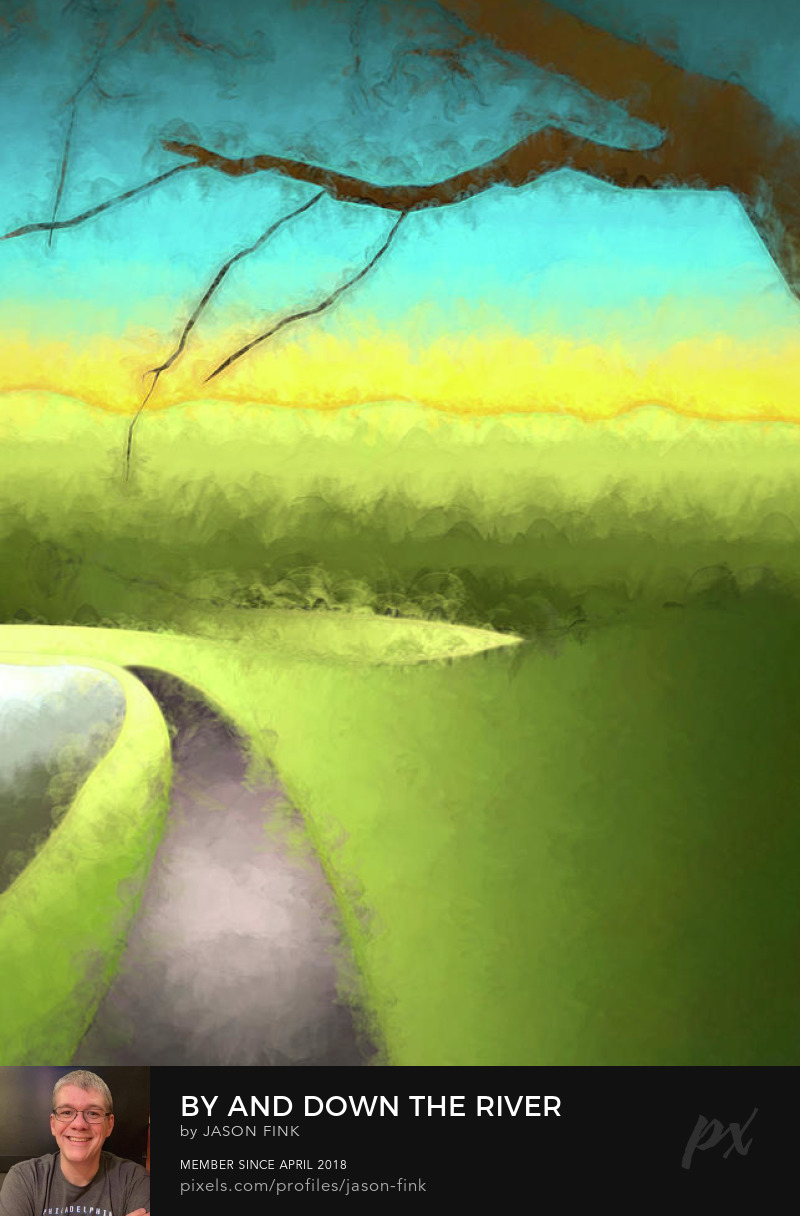 Here is my entry. There could be a second one - don't know yet.

I finally got around to finishing the spider web concept. 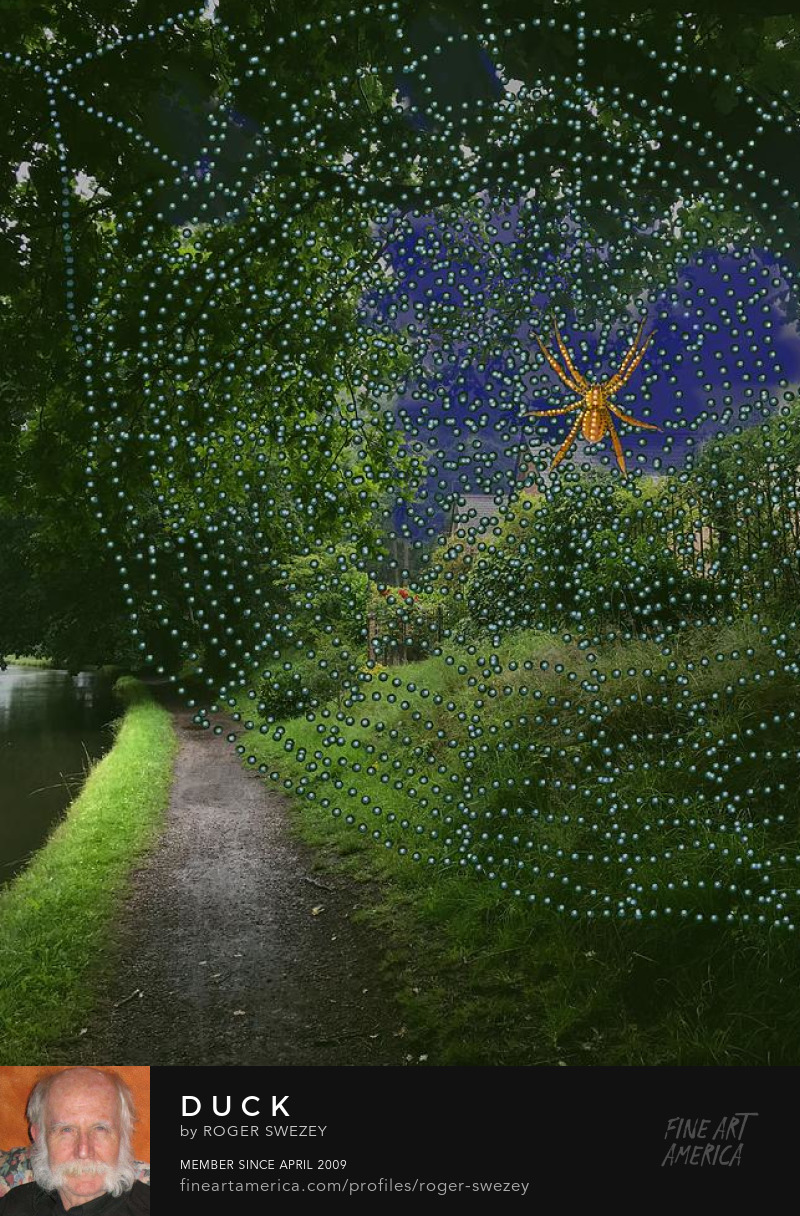 The sun peeking through the clouds... 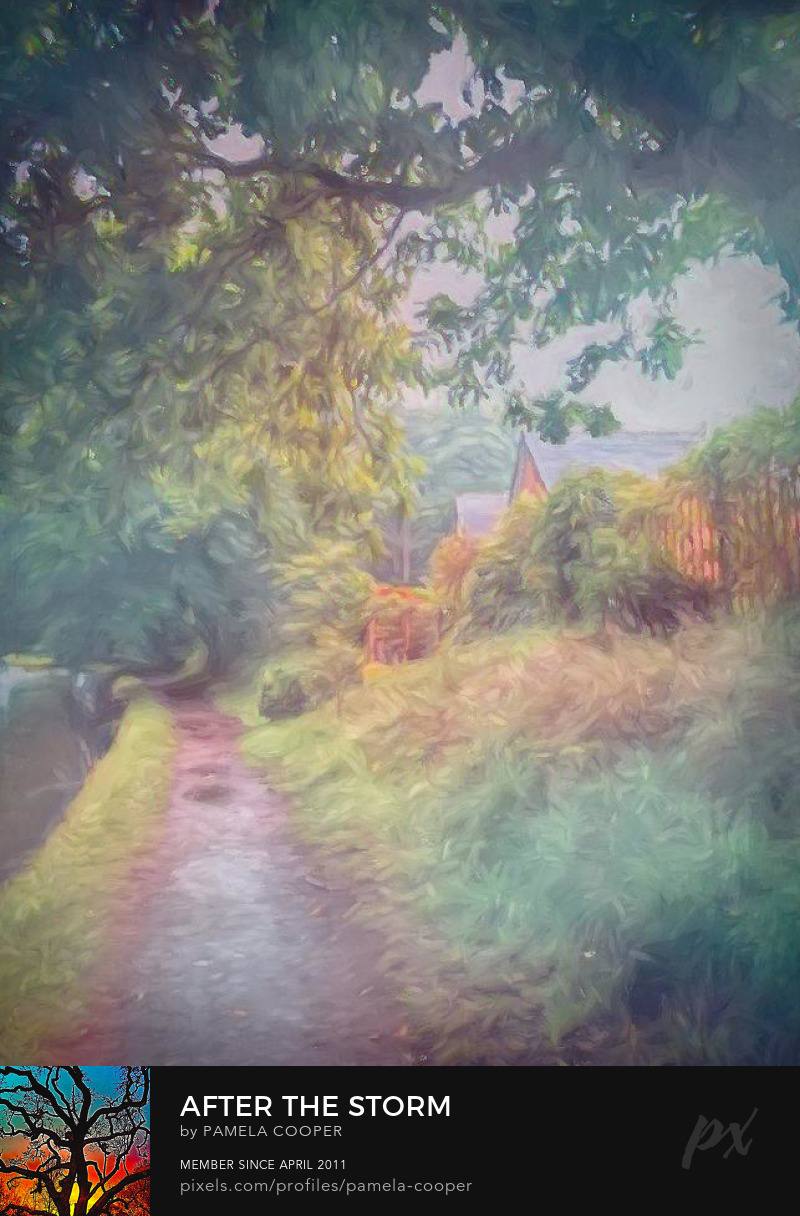 The water spots (puddles) in the path, have bothered me, right from the onset

With a couple of minutes of rough manipulations, I dealt with 2 of them.

I'll wait until the morning, to decide whether it's worth going any further.

I'm toying with the idea of transforming the shading on the path, going towards the foreground, into a full figure lying on the ground. Best Horseback Riding Trail. First I added mountains and sky in the background, then a stables barn and horses around the barn in a field behind a fence. I imagined saddling up one of the horses and riding around the lake on this trail. That would be heavenly for me!!!!!!!!!! Too late for the contest, but i sudenly got inspiration and wanted to delete all traces of man except for the roses which I multiply..

You're NOT too late

Just in and Hot of the Press

Dinosaurs on vacation via a port hole from the past. 300 million years ago or something like that, a family of Dinosaurs had a lucky escape, as they fled, grouped together they ran into an infinite port hole that randomly time travels. The Dinosaurs where caught on camera by the river, the photographer/digital artist who fled, said he got lucky, I just clicked and ran for my life he said. Photograph for Sale. 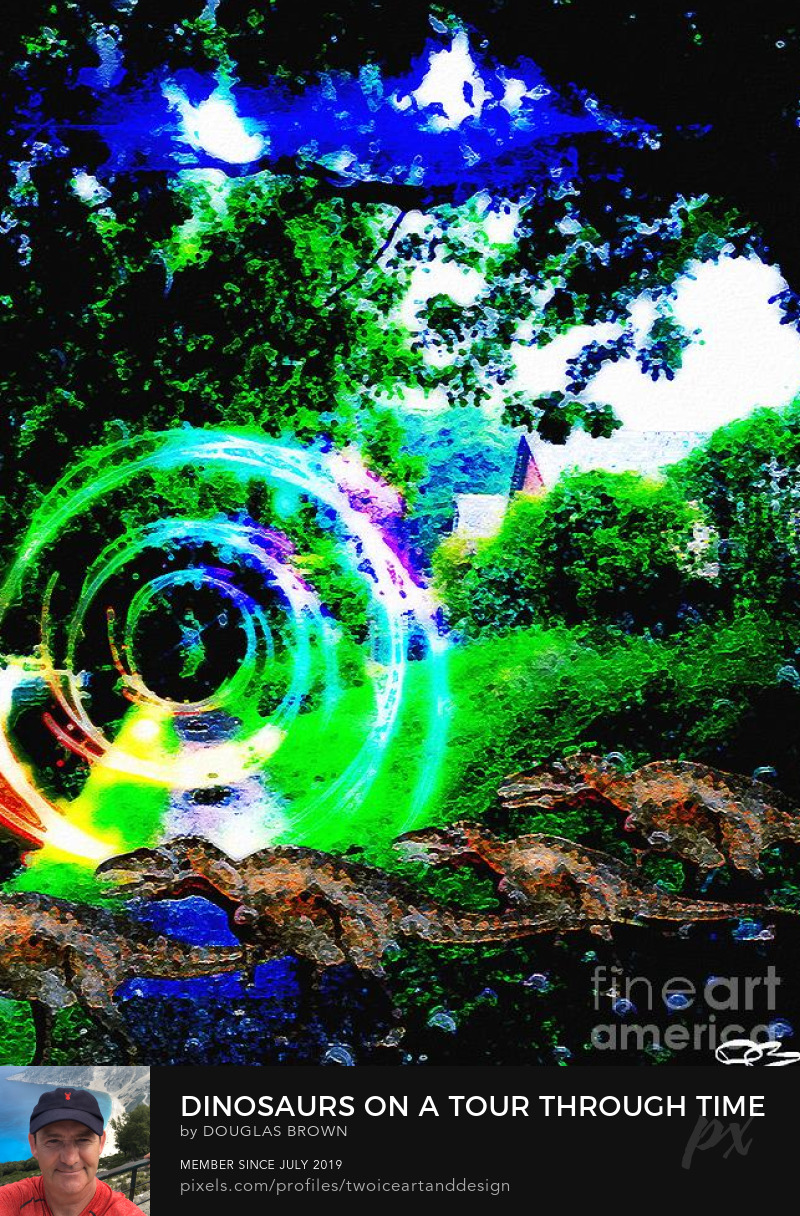 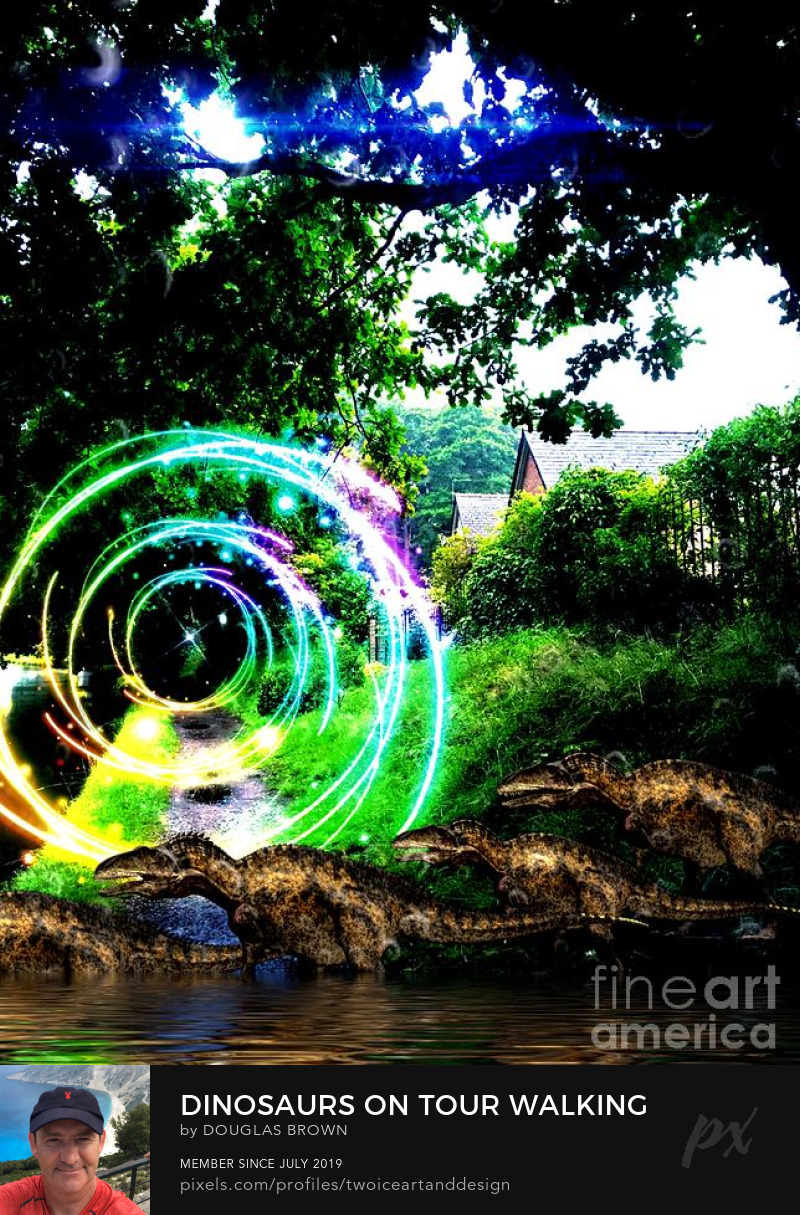 My last entry, in time 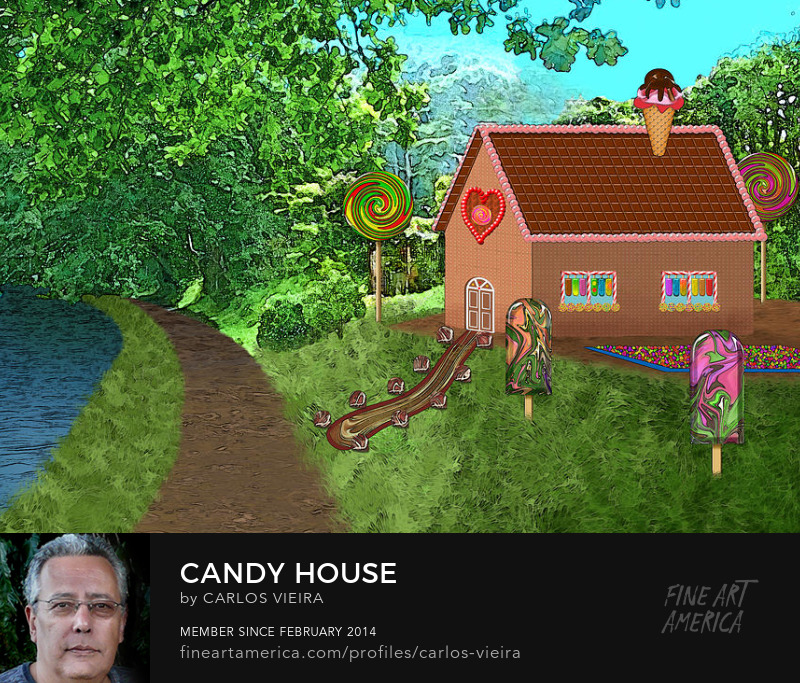 Cool Carlos, once again I like Roger and Carlos entry most, my wotes for them.

Roger, you are my friend, but I hope you dont expect resonable behiaveiour from me, like entering on a contest on time? :)

Great job everyone. I put my votes in.

Oops, I wondered why my image wasn't listed in the contest...I added it to this post thinking this was the contest....newbie error!! I will know next time to actually enter it in the 'contest' link.

All the best everyone....I'll go and vote now.

nope, the contest is the contest. this is just the discussion for it.

Always vote for your own AND one other image at least!!

Look at that! Well done!

thanks for the prize!

It's a wonderfully evocative image, so skillfully constructed.

Congrats Mike. I'm excited and thrilled to get 2nd! It's an honor. Love doing these. Looking forward to next one.