Email From Faa Saying Something Is In My Cart 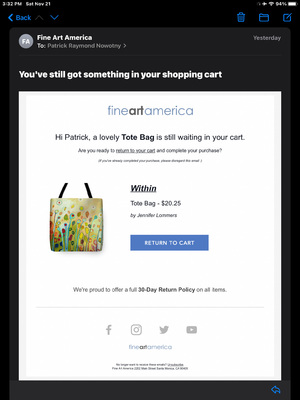 I keep getting an email that says I have a tote bag in my cart. Which of course I do not. Attached is a screen shot of the email.

I had an email like that a couple of weeks ago. It went away eventually.

Annoying, isn't it? I get them all the time.

It's honestly enough to make me opt out of all messaging and I would except as an artist, I don't want to miss something important.

But if I was "just" a potential buyer . . . that would be another story.

Biggest question is why am I receiving this false info in the first place? Sometimes I wonder about this site.

I was told that someone with the same IP address must have put the item in their cart.

I got this last year after checking what the shipping costs will be. I cleared the cart before but this seams not to have been recognized. But I only got it once, not again. A glitch I think.

Carts are IP based. It means someone on your network put something in. You're network can be work/office based, household, or even locality

No one else is in my household but me!

Patrick, if you are using a DSL or Cable modem your IP address likely changes from time to time.

If you are really curious as to how or why - do some searches comparing dynamic and static IP addresses and "why" we mostly have dynamic on home systems.

Most services will offer static IP addresses if you're willing to pay for it, ask your internet provider. I know Armstrong does but I think they're pretty local to the Delaware Valley area. The main reason I have one is so I can control which IP address can access my server, it's a security thing.

I'm seeing something like what you describe elsewhere (and did I get it in an email too????) I thought of it as a kind of a promotional thing that FAA is doing. I'll admit, I play games on my phone (love Candy Crush) and now and then I see the same ad from FAA there. I see it pop up on FaceBook in the main activity feed now and then, too. Personally, I think it's a little misleading to say it's in your cart ... but to say something else, less specific ... is great. It tells me maybe FAA is doing the same to my potential buyers?

I was surprised to see a Facebook post in my stream with one of my pictures and it said I had it in my cart.