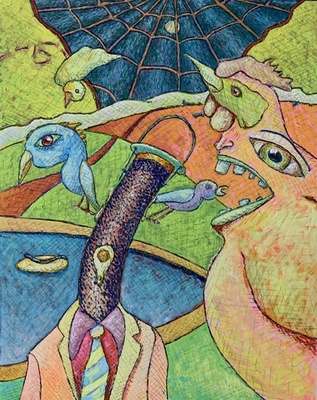 Is creativity valued in most professions? Is it valued in art? Perhaps the fitting in is more important? The old round peg in the round hole thing.

Depends entirely on who your boss is.

Professionals work off of principles.

Some artists work off principles as well.

Principles are a broad understanding for practical purposes. In our case to create.

No, it is not valued and yes it is essential for growth.

It's not valued unless someone pays for it..... in art or any profession.

As a mechanical designer I was actually encouraged to find creative solutions to problems.

When I relied, for the last 40+ years, on people, who initially had no idea that they would be buying my work or anything like it, when they, by happenstance, came upon it, I HAVE to chalk it up to CREATIVITY.

Depends on the field and what your position in the company is. If you are a grunt, your ideas have no meaning or are worth stealing. If you are the boss you are a visionary.

If you are an artist, well if you aren't creative you won't get too far. Usually creativity isn't recognized as an important or useful skill by those that aren't creative.

In my experience, valued, definitely.

As for your query re most professions -- fairly extensive variable.

What does creativity have to do with fitting in? Creativity means more than just being weird. Being strange doesn't necessarily make one more or less creative. Many creative people create products and solutions for the general public every day.

Coming up with a square peg for a round hole might be considered a "creative" solution but it's not very useful to anyone.

Yes , as per David King.
If you are talking about creativity in general it does gets its recognition at work. If one can solve a problem creatively, that could show a benefit to the business or company in dollar amount, then yes it is valued. ( I got paid handsomely)
If an independent artist showing her or his creativity on canvas, then its depends on the individuals (viewers) to show the value by purchasing the art or throw enough pennies to buy a coffee etc. (Sorry, coffee is an expensive commodity now, it is cheaper to buy a donut 🙂 )

From my POV, I would say that we cannot create something, without creativity...

Art being very subjective, some people may very much like 'your' creativity, some not so much, some not at all.

Is it being creative, if one sets out to solve a problem, and step by step, using logic, solves that problem?

Creativity is more valued and needed than ever before in a society increasingly difficult to be seen or heard in.

If creativity wouldnt be valued you wouldnt today write using computer, but rock most probably ..

Yes, agree with Tony. I have been rewarded for being creative in the 'business' world, even if it's only an 'atta girl'.

An author either has something to say or not as far as creativity goes.

None of us can actually move our wares for a full valuation without marketing. As my main prof used to say artists make the best businesspeople.

Beyond the art world - Fitting in I think would be the safest route. I think creativity can be both rewarded with Kudos or a What the heck did you do that for?

Innovation. As is with creativity. An alternative way of doing something that results in a novel and / or positive outcome. A new approach. Thinking outside the box (the cliche buzz phrase today).

Is it valued? Collectively yes. Progress requires creativity. Individually, perhaps not so much, unless you are a consistently successful innovator. They're out there, and few fit a particular mold, except perhaps in their way of thinking, in my opinion.

As a student of Industrial Design...Ahh, what do I know?

A very interesting question Roger. As well as the arts is much valued in Science, Maths and engineering. Some of the most creative people I had the privilege to meet were theoretical physics; including Stephen Hawkin and Abdus Salam (not as famous as Stephen Hawkins, but a truly amazing man)
In terms of the question, I would say; sometimes not enough, sometimes just about right and maybe surprisingly some times to much.
Bloom’s Taxonomy now puts creativity at the top of the pyramid, where in the past it was often either synthesis or evaluation.
Of course it depends on the definition of creativity. However, I do feel that the term creativity is used describe action that are not in fact that creative.
This might be particular importance in education. I always remember not seeing eye to eye with a Geography teacher who basically had the view that as long as the work was colourful it was creative.

By and large for most mid and lower level positions, creativity is a negative and a red flag to employers. They want people who "work hard" and follow instructions exactly. Fitting in is a large part of the culture of most companies. Creatives end up self-employed, which just furthers the stereotype of them being too independent to fit in to company.

Managers view creatives as a threat. If you are a creative and want to keep your job, you have to be very careful how you present new ideas and change. In the end it will only be implemented if the boss gets all the credit.

There is a marketing guru that reminds me of this in emails. She says nobody is gong to hire you so start marketing.

Generally.... (my one rule is that there can always be an exception to the rule) and... of course there are all kinds of variables that play into the scenario as already mentioned.

Company's are not usually "configured" to LOOK for creativity. That doesn't mean they wouldn't like it if they came across it, but they don't usually seek it out. They look for aptitude when hiring or at least signs that one is capable of handling a specific job requirement.

I had a career with a large company and I often wished they had a program that would actively try and discover "hidden gems" either by interviewing, survey, or some program that would make them aware of the untapped skills and talents lying at their fingertips. If you don't know of the skills one has, you can never implement those unknown resources toward bettering your company as a whole. This definitely would be more productive, which would benefit both the company and the employee. It could make the difference between just showing up for work and actually loving your job.

Sure, during the initial hiring, they get a general idea of a person's character, personality, and work history to an extent, but not a very in-depth knowledge of how the hiring prospect might really excel. I suspect the company wouldn't expect their employee(s) to have certain additional qualities that specifically relate to certain tasks required by the company. Maybe that is usually true... so they don't bother finding out about it because they believe it's not to their overall benefit through time and cost. Who really knows? They're interested in profit and so take the most expedient plan to get there. They will most likely provide on job training and schooling to bring the employee along.

Corporations are not democratic. They give you a job description and expect you to achieve the goal. Often someone else within the company is better suited for a type of job for various reasons but the company has not gone to the sufficient length required to fit the job to the person or vice-versa.

Employees may come to know their job sufficiently simply by working it every day to come up with better, more efficient ways to accomplish the task. When these ideas are implemented, the employee is rarely acknowledged enough for his ingenuity or "creativity and contribution".

An employee would most likely need to show personal initiative, (without being asked by the company) and basically prove to them a beneficial alternative through a creative process before someone takes note and change is made. Not only come up with a solution or improvement but then take it too the bosses so they can see it for themselves.

The bottom line is BE CREATIVE. If it's beneficial, it will be valued.

It's not the ROUND peg in the ROUND hole. There's nothing creative about that. It's finding a way to fit the square peg in the round hole that would be creative.

Well it seems that creativity was valued by Nursing many years ago.."Variety of form and brilliancy of color in the object presented to patients are an actual means of recovery.''--Florence Nightingale

I think creativity is valued in certain areas of medicine and the healing arts. I'm not sure if it is valued enough, though. When I worked as a nurse many years ago in psychiatry, we valued creativity very much as part of the therapeutic milieu...there were groups throughout the day centered on creating for the patients.

Agree with Brian. I've worked in small manufacturing companies most of my life. It's the employees doing the work who have the best ideas and the rare owner who seeks them out and listens.

Obviously not as much as it should be.

I could post a dozen more headlines from a basic Google search.

Not to get political, but a huge percentage of the money that backs the decision-makers, the school boards, and other decision-makers at city, county, state, and federal levels that make these cuts come from business contributions.

A "patent" for the industrial realm is sort of like a "copyright" for the artistic...they both need to be creative in some way.

RE:..."It's finding a way to fit the square peg in the round hole that would be creative."

Fortunately Roger, there may sometimes be different ways to accomplish the same goal.

Pretty sure my creativity at work is valued. Unless it's being used to craft an email, then not so much.

"Square peg in a round hole" Is often used as an axiom for describing the very difficult, but it was actually a very common practice in old post and beam buildings. The oak, or other wood, would be split into square pegs and then forced through a pipe or round die to make them round. It made for extremely strong buildings.

In the context of the work world, my experience has been that creativity flat-out scares the heck out of many managers because it may force them to have to expand their own horizons. Most simply don't want to deal with that, so creative people become "a problem". Some creative people are stifled and unhappily conform, some rebel and render themselves completely ineffective, and some adapt and find clever ways to nudge the boundaries outward until their management's comfort zone aligns with their own. Then the process begins again.

Ref Roger's observation re square peg, round hole... at some point maybe it becomes appropriate to redefine "square" and "round" and how they relate. ;)